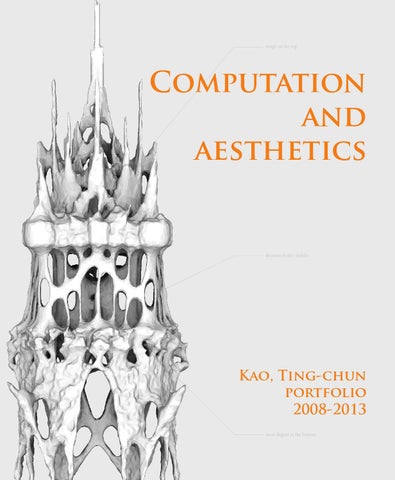 rough on the top

decorate in the middle

Museum Home for all

Coding Thesis Design The Digital Lamp of Architecture Special thanks to:

Introduction The Digital Lamp of Architecture - A New Church Prototype In the past, human beings were known for having strong faiths and devoted minds. As a result, church architecture became the bridge between humans and the Creator, the sacred and the secular, as well as darkness and lightness. The best technology at the time was used to deeply affect believers, stimulating them with the powerful ambiance of church architecture, and allowing them to ultimately realize that men were as insignificant as a drop in the bucket. Referencing John Ruskin’s “The Seven Lamps of Architecture,” the most significant element of good architecture is the feature of sublimity. The same majestic grandness is also present in gothic architecture. By combining classical elements with modern computing technology, one can now capture features such as vastness of space, optimized structures and detailed ornamentations, while approaching them with a strong sense of beauty and aesthetics. In the Digital Lamp of Architecture - A New Church Prototype, Antoni Gaudî’s hanging chain methodology is implemented, updated and extended using computing technology. Multi-forces are used in the process of programming. These forces stretch more than one surface at a time and, as the programming process reaches an end, a sense of balance is achieved. At any time, these forces are stretching the surface in multiple locations until a sense of balance is achieved. This balance encompasses a dynamic display of uncertainty as well as physical rules that represent the religious and scientific system, ultimately combining both top-down and bottom-up approaches to architectural design. Page 3

Gaudi Structure Methodology &amp; Ruskinâ&amp;#x20AC;&amp;#x2122;s Ornamentation criteria Modern and Classical Architectures are different in many aspects. The two most significant aspects are surface and structural system. Most Architecture after modernism has been pursuing purism, focusing on functionality and efficiency. During this time, ornamentation was widely considered unimportant and secondary, sometimes even regarded sinful. Unlike contemporary architecture, my thesis uses computing methods to redefine classical architecture through the re-design of ornamental surface and structural system. Computing system is based on physical simulation, such as particle-string system and cloth simulation, and implements code interpretation of ornamental graphics and surfaces. The final goal is to use soft material to construct the architectural structure and ornamentation. This thesis is separated into three parts: 1. The Seven Lamps of Architecture and its theory development. 2. Computing simulation . 3. Physical model.

Structure Model made by Gaudi

Simulation programming In the plaster casting model, surfaces are shaped by creating grids and attaching points with one another. By using various cloth materials the structure will be slightly different every time. The softer the cloth, the more structure phenomena occur. These processes are similar to the process Antoni Gaudi used. The hanging model creates smart geometry that once the computer finishes its calculation, the cloth will turn into a sculpture and decorate the space. In the simulation program, each point weight can be differently from one another. Furthermore, GUI is designed for communication between top-down and bottom-up approach, so users can control unpredictable outcomes through experiments. Now using this new system, structure simulation and ornamentation can be created in the same approach at the same time.

Final model generated separately in different parts Surface on the top are more roughly decorated, these elements include twist columns and pattern mosaic, but with more opening to improve the light of crossing

Surface in the middle are usually settled with statues. Choir on the top can improve the overall acoustics and service feeling

Surface at the bottom usually has the most elegant moldings, because they are closest to eyes

Iconostasis, where pastor give messages This underground is directly connected a sacred water source where Christians can be baptized.

Entrance from the land Chevet as a praying area on Sea

Aisle and nave can determine the deep of the church

Rendering Location: Nave - the middle and the main part of the church. Normally determine the deep of space.

3D Print Final Model Duration: 24Hours * 7 days. (The first UP! Plus machine was used to print model from the beginning. Then the second UP! Plus was involved in productions) Separated Pieces: 84 parts.

Final Model: A section model that can be separated into two parts. Page 14

Flocking Agent is based on three rules: 1. Separation 2. Alignment 3. Cohesion

Wave A Cosine Function is used in this small program. d = the distance between our mouse position and all points (grid). The radius of ellipse is positive with Cos(d). In the End, “t” is used as time parameter. Page 20

Subdivision Subdivision is a kind of recursive drawing. Church created by subdivision using noise value as its height value in the each point. Page 22

The best way to find symmetric surface is to find the geometric centre and connect the corner to the surface centre. The diagram on the right shows how to create the definition between formal geometry boxes. However, this usage can not only be applied to symmetric shape but also to organic brep boxes. Using this method, many three Dimensional spaces can quickly and easily be generated. The minimal surface can be created through any closing geometry.

Honeycomb geometry can normally be noticed through its facade 2d geometries. Using fishing houses as our working spaces, my design used inflatable materials and careful manipulation to design movable housing for the poor. The diagram on the left hows the typology and morphology in parametric methods.

Minimal Surface Church In this project minimal surface was implemented into several bounding box system. So by adjusting boxes patterns, the outcome will c&#96;hange at the same time.

The site is located just beside two high way roads, so the most important problem in this project was to reduce the noise pollution. Being an architect, we can use space to effectively influence student study habits in our buildings. Thus, we can provide student with a better learning environment so they can educate themselves. My design strategy is to create a double hyperbola wall first, in order to reflect all noise. I then organized all the different kinds of curriculums; putting the same type class together and opposite types farther away. In considering many kinds of factors, I decided to use a computing method to assist me with these problems. For example, I used the computer to calculate the total floor are and based on the same floor areas, I strategically designed spaces that triggered student communicated during class breaks, because I think interaction during break time is more important than active participation in class. So in this project, I was trying to use a simple way of calculation to define many basic problems more clearly. We can simply use this kind of calculation to effectively design better architecture.

Project type: Personal project / Academy / Hnadmade/ Handrendering / Architecture Site: Dihua Street n.127 2nd year Studio 2009 2011 This shop is located on the famous Dihua Street where we usually buy things for Chinese New Year. The concept was based on the commercial system in Dihua Street, using two kinds of coffee beans from nature, Using two kinds of coffee beans, peaberry and flat beans, I want to create a â&amp;#x20AC;&amp;#x153;bean space.â&amp;#x20AC;? By entering the bean space, my intention was to allow the customers to experience a different atmosphere as compared to the outside.

The technical drawing above, named “Heart Beating,” consists of several circles. When those circles interact with each other, it becomes with a ripple-like effect, visually influencing observers and arousing dizzy and echo-like feelings. Along the lines of the visual effect idea, in the project on the right, I tried hard to test the friction, force and arrangements between wood sticks. Whenever I push the sticks below, the above components will also be moved by friction between them and will also be controlled. So basically, it just like swarm system, we control and define the relationship between one unit and the other. Sometimes we don’t know what will the final result will be, but sometimes, if we lucky or smart enough, we can find out a good way to define the rules between small units and from the button-up and the result can be predict in someway. Both projects were done using the same design strategy, which comes from basic components and finally causes purity, simplicity and some complexity.

In the project â&amp;#x20AC;&amp;#x153;Magnify the Objectâ&amp;#x20AC;&amp;#x153;, the possibilities of scaling, magnifying and representing small objects has been discussed then turned into architectural scale. The goal of this practice is to carefully balance aesthetics and structure. The foam board was used as the main project material and connected as pieces without the use of glue.

In the â&amp;#x20AC;&amp;#x153;Tree Spaceâ&amp;#x20AC;? project a boundary was used to limit a volume within a 60x60x60cm3 box. First, a concrete cube is splitted into 7 pieces so the section can be seen easily. The inner space is just like an atmosphere with black and white parts. The white part (Object) should be designed and black part (Space) is the rest space. Finally, each piece can be reassembled in different angles. The boundary and limitation is is less strict and more free forming in this way, allowing freedom to shine through.

Competition Home For all Members

This floating museum is a micro-city of great dynamism. ArtLink correlates an art museum which a dynamic city. By synchronizing the major components of the city, the nature, and arts, this 21 st-century museum improvises a dialogue between apace and culture, which it provides rooms for exhibitions and recreations. To optimize the connection between the urban and cultural elements, our proposal significantly redefines and expands the boundary of the site. The new museum encompasses nice â&amp;#x20AC;&amp;#x153;urban blocks,â&amp;#x20AC;&amp;#x153; which include the existing Yingge train station and the Yingge agriculture association. In addition, new blocks are created-courtyard block, passage block, village block, square block, and waterfront block....

Completed the Symposium of Leaders in Students Associations of Tamkang 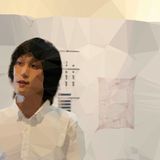