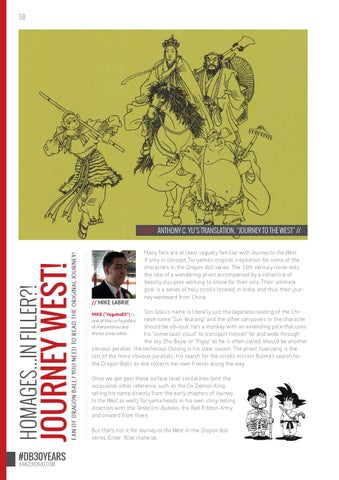 FAN OF DRAGON BALL? YOU NEED TO READ THE ORIGINAL JOURNEY!

Many fans are at least vaguely familiar with Journey to the West, if only in concept, Toriyama’s original inspiration for some of the characters in the Dragon Ball series. The 16th century novel tells the tale of a wandering priest accompanied by a collective of beastly disciples working to atone for their sins. Their ultimate goal is a series of holy scrolls located in India, and thus their journey westward from China.

Son Goku’s name is literally just the Japanese reading of the Chinese name “Sun Wukong,” and the other carryovers in the character should be obvious: he’s a monkey with an extending pole that uses his “somersault cloud” to transport himself far and wide through the sky. Zhu Bajie, or “Pigsy” as he is often called, should be another obvious parallel; the lecherous Oolong is his clear cousin. The priest Xuanzang is the last of the more obvious parallels; his search for the scrolls mirrors Bulma’s search for the Dragon Balls as she collects her own friends along the way.

MIKE (“VegettoEX”) is one of the co-founders of Kanzenshuu and enjoys poop jokes.

Once we get past these surface level similarities (and the occasional other reference, such as the Ox Demon King taking his name directly from the early chapters of Journey to the West as well), Toriyama heads in his own story-telling direction with the Tenka’ichi Budokai, the Red Ribbon Army, and onward from there. But that’s not it for Journey to the West in the Dragon Ball series. Enter: filler material.