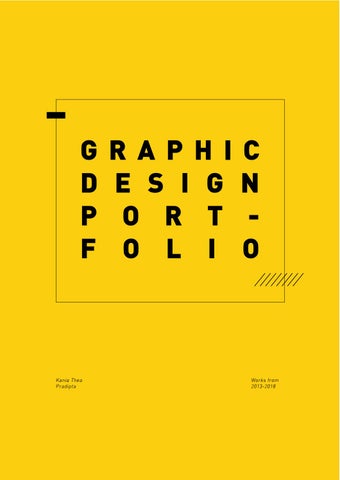 (this page is intentionally left blank)

K AN I A THEA PROFILE

An architecture graduate who has big passion in art, enjoys aesthetic composition, respects meticulous design, and a big fan of movies and pop culture. Works industriously as individual, cooperatively as team-mate. Excitedly accomplishes new challenges and one of your adventurous ones.

Propaganda design for Gaung Bandung Event: Kampung Wajah Kota Gaung Bandung is an annual event held by architecture students of ITB. The event had a purpose to introduce architecture to society. For 2013’s event, the theme was “Kampung Wajah Kota” or Village, the Face of City. Cities in Indonesia formerly built from villages, including Bandung. Bandung, up until now, consists of many villages which has their own characteristic, uniqueness and history. This what made a city different from the other. From architecture point of view, each village’s particular structure is really interesting to be explored and studied for the city’s future development.

The students conducted a thorough survey down the various villages in Bandung, and later on created a creative mapping of those village. I was the Creative Director for the project. From the mapping, we could figure out the village’s history, society and physical’s structure, and potentials.

03 Propaganda &amp; display design for Garasi Nusantara Exhibition Garasi Nusantara is an exhibition which presents hand-crafts, drawings and art performances by the children in Griya Asih orphanage. This exhibition was held by a social community called Pijar Renjana. Pijar Renjana had been conducting empowerment programs in Griya Asih for almost the whole year of 2017. As a closing, Pijar Renjana encourage the children to create any kind of craft or art which could show their talent and potentials.

BRANDING IDENTITY 01 Identity branding design for Social Community: Pijar Renjana Pijar Renjana is a social community which concerns on children’s, who live in orphanage, education, welfare, and life quality. The colour red, blue and yellow represent fun, happiness, and cheerfulness that the community brings in each of their program. ‘Share Your Happiness’ is the motto of the community, which aims to invite more people into this movement, to make them more aware of these children’s issues, and to grow people’s willingness to simply spend a little of their time each month and share the happiness with the kids.

02 Identity branding design for NFR Jewelry NFR Jewelry is an Indonesian local business product on hand-crafted custom wedding, engagement, or even just casual ring. The concept is â&amp;#x20AC;&amp;#x2DC;personalizeâ&amp;#x20AC;&amp;#x2122;. Every ring tells different life story. It is fresh, expressive, abstract, geometrical; it represents youth. The ring is not a mere fashion statement, it is a symbol of commitment, trust and compassion.

DIGITAL 01 Illustration for Eid Al-Adha Celebration In Islam belief, Eid Al-Adha has been known as the day when Ibrahim sacrified his own son, Ismail after getting a premonition from God. For his unquestioned faith to God, Ismail was eventually swapped with a goat. Up until now, the event is celebrated with sacrificing goats or cows, and the meat is to be shared with the poor and others in needs.

Every 21 April, kids in Indonesia commemorate her fight and battle by wearing traditional clothes from various tribes in Indonesia.

04 Illustration for Vesak Day Vesak, also known as Buddha Day, is a holiday traditionally observed by Buddhists to commemorate the birth, enlightenment, and death of Gautama Buddha.

The biggest Vesak festival in Indonesia is anually held in Borobudur temple, Central Java. By the end of the festival, people would lit lanterns and release them up in the air as a symbolization of prayers and hopes that would go up above beyond the Heavens.

Eid Al-Fitr is a big day for Moslems all over the world. Itâ&amp;#x20AC;&amp;#x2122;s the victory day after a full month of fasting. People are believed to be purified in this day, hence we should forgive each and everyone. It is also the day where everybody gathers with their families and close ones, along with big feast and presents to make it more festive.

06 Illustration for Children’s Food Donation Responding to children’s, who live in orphanage, poor condition of nutritious and adequate amount of healthy food, a local social community called Pijar Renjana asked for an illustration to raise people’s awareness toward the issue. They want to give a call for action, so that more people would donate to the orphanage in the form of nutritious and healthy food.

07 Illustration for CONNEXT Co-Working Space CONNEXT Co-Working Space is located in Cilandak area, South Jakarta. They have vision to create a conducive and productive working space where people could meet, interact, and work together. They believe that great work comes from collaborative ideas, creativity and supportive environment. The colour yellow represents vibrant working environment and happiness, blue represents assertiveness, and red represents energy. The illustration showing different kind of people from various age, jobs, and styles, means anybody could work there, collaborate, share ideas and creativities. The place is limitless.

Mural Design for Branche Restaurant This illustration is about tropical and elegant. You can feel the fun summer breeze, yet in a more delicate way. I made two colour tones for this illustration; the first one got chosen by the client.

02 Report Design for Youth Voices Against Child Marriage Event This is a collaborative event, which was oragnaised by the Indonesian Adolescent Girls Network (AKSI), Girls Not Brides, The Embassy of the Kingdom of the Netherlands and UNICEF Indonesia, to raise awareness on the importance of empowering adolescents to speak out about child marriage. The concept is to make a compact report; minimalist in layout, great readability, and colourful tone since the event was about youth empowerment.

01 Logo design for HICUP Hicup is a startup brand for water drinking bottle which targets everyone, especially the youth, so that the use of low-grade plastic bottle could be reduced. Hicup use a high-grade plastic material for the bottle, with a sleek design which is similar to regular plastic drinking bottle, enables people to get a comfortable grip and size to put it anywhere, anytime.

TYPOGRAPHY Free-lined typography style represents a dynamic product, flexibility which is one of the youthâ&amp;#x20AC;&amp;#x2122;s prominent characters.

Smaller circles represents water droplets, since water is the main element of the product.

COLOUR SCHEME Yellow represents freshness, energy and happiness, which are the values of the product itself. #FFCC66

Infographic for Video Laut Kita - DigiSocial Platform Competiition Laut Kita is a digital data platform about Indonesia’s maritime infos, which provides data about Indonesia’s seas’ profile, demography, statistics, geo-politics, location and comodities. The idea came from the fact that Indonesia has such potential seas, yet there hasn’t been any proper system to manage, maintain and regulate them. So, from this platform we hope that there will be more transparency on maritime data, therefore each stakeholder and any potential user could help managing and maintaining Indonesia’s seas as exceptional natural sources. Video Link: https://www.youtube.com/watch?v=bV0b3rxNx5Q 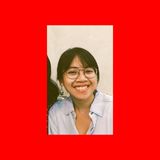