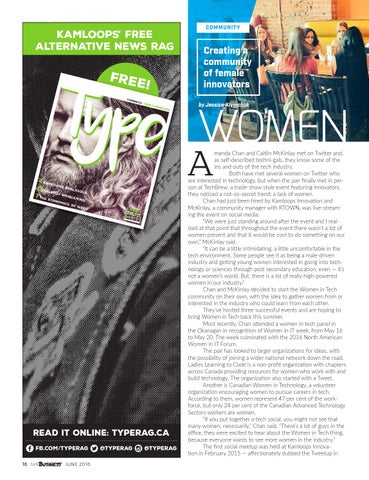 Creating a community of female innovators

manda Chan and Caitlin McKinlay met on Twitter and, as self-described techni-gals, they know some of the ins and outs of the tech industry. Both have met several women on Twitter who are interested in technology, but when the pair finally met in person at TechBrew, a trade-show style event featuring innovators, they noticed a not-so-secret trend: a lack of women. Chan had just been hired by Kamloops Innovation and McKinlay, a community manager with RTOWN, was live-streaming the event on social media. “We were just standing around after the event and I realized at that point that throughout the event there wasn’t a lot of women present and that it would be cool to do something on our own,” McKinlay said. “It can be a little intimidating, a little uncomfortable in the tech environment. Some people see it as being a male-driven industry and getting young women interested in going into technology or sciences through post secondary education, even — it’s not a women’s world. But, there is a lot of really high-powered women in our industry.” Chan and McKinlay decided to start the Women in Tech community on their own, with the idea to gather women from or interested in the industry who could learn from each other. They’ve hosted three successful events and are hoping to bring Women in Tech back this summer. Most recently, Chan attended a women in tech panel in the Okanagan in recognition of Women in IT week, from May 16 to May 20. The week culminated with the 2016 North American Women in IT Forum. The pair has looked to larger organizations for ideas, with the possibility of joining a wider national network down the road. Ladies Learning to Code is a non-profit organization with chapters across Canada providing resources for women who work with and build technology. The organization also started with a Tweet. Another is Canadian Women in Technology, a volunteer organization encouraging women to pursue careers in tech. According to them, women represent 47 per cent of the workforce, but only 24 per cent of the Canadian Advanced Technology Sectors workers are women. “If you put together a tech social, you might not see that many women, necessarily,” Chan said. “There’s a lot of guys in the office, they were excited to hear about the Women in Tech thing, because everyone wants to see more women in the industry.” The first social meetup was held at Kamloops Innovation in February 2015 — affectionately dubbed the Tweetup in