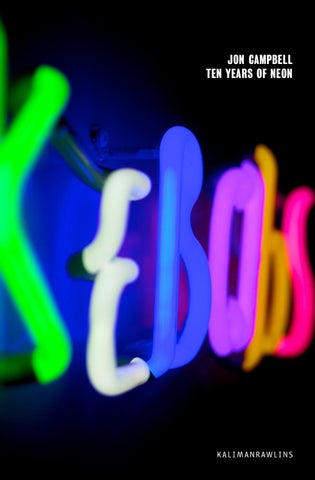 Jon Campbell exhibited his first neon works in 2002 in the exhibitions Relaxed, in an off Chinatown kinda way, Uplands Gallery, Melbourne; and Relaxed, in a western suburbs kinda way, Darren Knight Gallery, Sydney. The first neons – Maaate, Howzaat, and Why – were single words selected from the Australian vernacular, similarly to how Jon’s text paintings had been created. Maaate and Howzaat are constructed from an mdf panel finished in hi-gloss enamel paint with the neon tube mounted on the panel and enclosed with a clear perspex case. The finished work takes the appearance of an outdoor sign one may see above the entrance of a restaurant in Chinatown, or in the window of a suburban pizza shop. The words are written in a hand-drawn font and spelt incorrectly, exaggerated to appear as they may be pronounced. Why is a neon tube mounted on an enamelled metal frame with a blue acrylic case all in the shape of an upper-case Y suggestive of the early signage of the YMCA, or ‘the Y’ as it is known colloquially. These neon works emerged during a period around the early 2000s when the artist was experimenting and presenting a variety of media including laser-cut layered acrylic (so you wanna be a rock ’n’ roll star, 2002), largescale printed vinyl banners (backyard, 2002), and other text works that were becoming more relief-like, or sculptural, in their form. After a period focused on the beginning of the YEAH flag project, it is not until 2006 at Darren Knight’s booth at the Melbourne Art Fair that we see the return of neon with Kebabs. Taking the same construction as Maaate and Howzaat, it’s then finished with an acrylic ‘display case’ as if to place emphasis on the fragility and handmade appearance of the ‘hand-drawn’ neon. Kebabs is the first multi-coloured neon to appear with each individual letter a different neon colour. Jon further emphasises the distinctness, or separateness, of each letter by using a combination of upper and lower case fonts which are seemingly marginally out of scale with each other creating the illusion of a haphazard or unplanned layout. In the 2007 exhibition signs of life (making reference to the 1999 Melbourne Biennial of the same name) the bright yellow neon of the classic Australian pizza combination Ham and Pineapple is presented in an exhibition of large scale paintings and wall drawings. signs of life also sees the now famous YEAH flag, with its distinctive pink lower case handdrawn ‘bubbled font’ sitting on dark green, take neon form. After the runaway success of the YEAH flag – from its beginning as a petitioned sign of change with A Constructed World in the 2005 exhibition YEAH FLAG / together again at Uplands Gallery, and its inclusion as a symbol of a laid

back and carefree Australia at the 2006 Melbourne Commonwealth Games, to the raising of the flag by Queen Beatrice of the Netherlands at the De Overkant / Down Under sculpture exhibition in the Netherlands in 2007 – Jon says, ‘to make the yeah design into a neon seemed the next thing to do’. Sunshine, a stark white neon on a pale blue board was exhibited at the 2008 Melbourne Art Fair as part of the Uplands Gallery presentation. Located in Melbourne’s west, Sunshine is Jon’s favourite name for a suburb. $23,000,000 is the last of the neons to be housed in an acrylic case. Exhibited in the 2008 exhibition of the same name at Uplands Gallery, $23,000,000 is the golden ticket, albeit the Australian version, with its golden background as per the original that Charlie found inside the lucky Wonka Bar, but Jon’s version has a purple text overlay providing the nod to our own iconic Cadbury’s branding. $23,000,000 is the great suburban dream, the fantasy of millions of Australian’s week after week, a fantasy not lost on Jon: ‘I heard on the radio that this was the jackpot amount for lotto one week, an amazing amount to win, what would you do with it, imagine!’ Perhaps serendipitously, after $23,000,000 the next neon we see is Underdogs, a muted but imposing epithet given to Australia’s working-class, one that is as celebrated by some as much as it is unfairly imposed on others. Jon sees that lighting up the underdog in neon elevates their status. ‘It’s interesting how there is a lot of sympathy for the underdog in sport, but elsewhere we’ve got a kind of ‘fend for yourself’ attitude,’ says the artist, identifying a cultural phenomenon seen as unique to Australia. This uniqueness, the Australian-ness of a thing, the vernacular, even an epithet, is a central theme in all of Campbell’s work, not exclusively the neons. We see this theme amplified in the last four of the neon works to be made. Pure Bewdy, exhibited in 2011 at Darren Knight Gallery in an exhibition of the same name, is an homage to the John Baldessari Pure Beauty painting from 1966–68; according to the artist this neon is the Australian version of that painting. And like Baldessari, Jon’s text works are interested in our use of language, how language creates meaning, and importantly, how language constructs new meaning. Shit Yeah is the tough version of YEAH. First exhibited at the opening of KalimanRawlins in 2011, the Shit Yeah neon reminds you of when (and how often) you may use the expression, just as the YEAH flag and neon reminds you of how often you say ‘Yeah’. The new Yeah neon, with its painted shaped board, was included with the largest of Jon’s neons – just sing what you feel – at the exhibition of the same title at the National Gallery of Victoria Federation Square earlier this year as part of the NGV’s invigorated public programming. just sing what you feel sat facing the Forum theatre in Flinders Street, a reminder to the Melbourne public that art can be something free and relaxed, something fun and spirited, just as all these neons show. — Jarrod Rawlins, April 2013

This catalogue is published on the occasion of the exhibition Jon Campbell Ten Years of Neon 5 May - 25 May 2013 Kalimanrawlins, Melbourne 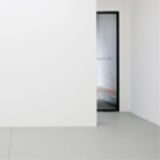 Jon Campbell Ten Years of Neon 5 May - 25 May 2013 Kalimanrawlins, Melbourne

Jon Campbell Ten Years of Neon 5 May - 25 May 2013 Kalimanrawlins, Melbourne