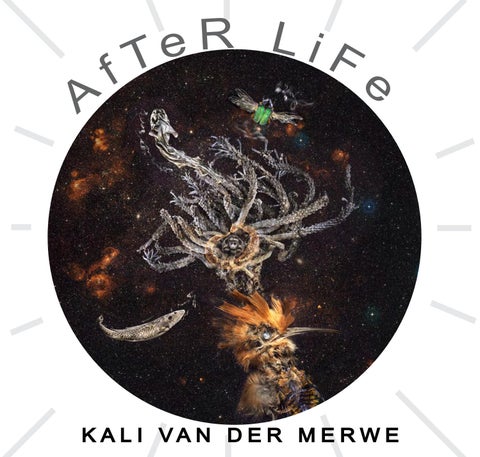 opens an aperture to the mysteries of life through the lens of death Kali van der Merwe This exhibition speaks to a re-interpretation of the museum specimen guided by plays of my imagination rather than organised by any systematic reasoning. My photographic explorations take place in the dark, with the night as my darkroom. I blur boundaries between painting and photography using long exposures and a technique termed ‘light painting’. This enables my image creation to become an encounter that takes place over a period of time. I use a moveable light source to explore the external structure of inert, mostly dead form, in the hope of capturing an elusive “essence of being”. I situate my individual photographs in imagined scenarios that unfold within celestial vistas of galaxies (courtesy of the Hubble telescope). I navigate balances between the minuscule and cosmic, reality and theatricality.

My three dimensional art works are phantasmic, hybrid life forms composed of bones, insect remains, plant material, excreta and sections of animal corpses. The various elements are preserved and put together with alternative methods of taxidermy I have learned and developed. In this endeavour I am re-imagining and re-imaging alternate paths that evolution could have taken. Enacting my “God power in this world”, (mythologist Joseph Campbell’s description of creativity), I re-animate road kill victims into perpetual motion films to honour of their lives and mourn their senseless deaths. This “Theatre of the Deceased”, is the meeting place of the ordinary, the sublime, the unlikely and the impossible. Photography, sculpture, video, animation, text, taxidermy, soundscapes and olfactory art offset each other in an immersive, interactive, tactile environment intended to stimulate wonder, curiosity and deeper connection to the creatures and plants we share our existence with. The natural world, robust, but in fragile balance, is incredibly vulnerable to human lifestyles and cultural projections.

My fundamental search is for the ever metamorphosing unity present in all life. I do not harm or kill in my creative process. Flowers are ethically picked or received, insects, are serendipitous finds and animals are mostly victims of road kill.

Art meets science taxidermy and magic Dr. Danny Shorkend Kali van der Merwe has created images of uncanny scientific, taxidermical and magical qualities. There is a sense of structure and order, yet one “imposed” beyond the assumed categories of the sciences. Her path therefore embraces both a desire to know nature and one that is in awe of – and complicit with – the unfolding of the natural and cosmological realms.

Her methods allow for a beautiful light that pervades her subjects. Her subjects â&#x20AC;&#x201C; ranging from plant life to the world of animals â&#x20AC;&#x201C; in fact is a life that has passed and yet the artist suggests that that body still somehow houses a spirit or life. In the macabre death of the image, one can intuit a life that was, an existence that was palpable and real. In a Frankensteinian sense Kali almost breathes life back into these carcasses and remnants. In her photographs she contextualises the dead bees, flowers, snakes and snake skin, cats and birds to name a few, within galactic, interstellar space, images derived from the Hubble telescope. This gives such animal- forms an almost angelic and other-worldly meaning. It instils in them a sense of cosmic depth and meaning even after the spirit appears to have expired. At the very least, the viewer may well sense a portal to other dimensions. In her installation work, she urges the viewer to touch and fondle the various broken and fragmented bodies and relics. It is an experience that precedes any kind of knowing or categorisation of the mysteries of the created world; it is a primitive sense of awe and wonder.

At the same time, as the artist communicated in her speech at the opening, the observer effects the observed. Thus, one cannot pierce and know reality as such as being kinds of biological organisms ourselves we effect and change the experimental set up. In simple terms, one can only know with reference to the framework of human knowing, and that framework is necessarily limited. Yet, Kali suggests an alternative taxidermy that considers an artistic vision.

One is not simply looking in on nature, for humans are stardust and of the earth (hence her juxtaposition of both space and animal). Kali gathers, connects with, and then via an artistic process has over a period, developed a language. It is a kind of post science, post history, post (post) modern vantage point where mind, heart and senses coalesce. Playing her alter-ego, Dr Kali, her work appears to straddle the line between painting and photography, the sculptural and the installation or found-object. It is a taxidermy, a secular enterprise and yet a holy place of worship. Â Published Cape Times Monday, July 31 2017

Art at Iziko brings Earthâ&#x20AC;&#x2122;s wonders to light in darkness Lucinda Jolly Science was artist Kali van der Merweâ&#x20AC;&#x2122;s first love, but she was put off by the idea of wearing a white lab coat, and this aversion pushed her in the direction of the arts. Her love of science, however, particularly in relation to the natural world, remains intact and underpins all her artistic output. There is a popular misconception that science and the art are, at best, uncomfortable bedfellows and, at worst, occupy separate, sealed silos. However, master painter and polymath Leonardo da Vinci is considered to be the first western scientist.

Without science there would have been no deep perspective or profound understanding of proportion. Another Renaissance man, Albrecht Durer, influenced anatomy and map making with his drawings. He was responsible for the creation of a perspectival map considered to be the very first perspectival interpretation of a “terrestrial hemisphere”. Contemporary artists such as conceptual painter Gerhard Richter show how art can be hugely influenced by science. His series of paintings titled Silicate were influenced by an article he read, illustrated by photographs taken through a microscope that showed silicates in the carapaces of insects, which create an iridescent effect. van der Merwe’s exhibition, After Life, is housed in the Iziko South African Museum. The positioning of exhibitions in this space indicates the shifting role of museums, reflecting the trend of interfacing disciplines. She writes that “this exhibition speaks to a reinterpretation of the museum specimen guided by plays of my imagination rather than organised by any systematic reasoning”. Hunt my Tongue 2018

To create her composite photographs of creatures, she uses a photographic technique called light painting or drawing. It’s a process executed in the dark and depends on long exposures and a moveable, hand-held light source. Unlike a specimen seen by the human eye, it provides incredible detail. Every pore, each scale, every hair gives her images a hyper-real or three-dimensional pop-out effect. AfterLife provides a clue to van der Merwe’s approach, which also hints at her adopted name. The Hindu mother goddess Kali was empowered with the twin poles of creation and destruction. van der Merwe refrains from any form of killing. Instead, she waits for the creatures she uses in her art to come to the end of their natural life span, or she collects road kill. The images in AfterLife “open an aperture on the mysteries of life through the lens of death”, she says. Her intention is “to stimulate wonder, curiosity and deeper connection to the creatures and plants we share our existence with”. van der Merwe’s imagination may be fantastical, but it draws inspiration from the natural world. “I am re-imagining and re-imaging alternate paths that evolution could have taken,” she says.

Through her animations and composite photographs, she invests her creatures — including a genet, raptor and bee — with a virtual immortality. “I reanimate road-kill victims into perpetual motion films to honour their lives and mourn their senseless deaths.” As if dipped in a metallic glitter, her supersized fynbos flowers and coiled serpents, gleaned from Baardskeer-dersbos in the Overberg where she lives, have set her home ablaze with a swirling cosmos background of fizzing stars, courtesy of the Hubble telescope. Bell jars precariously perched on tyre towers contain the waxed remains of creatures in strange constellations that can be closely eyeballed with magnifying glasses.

Her drawers are filled with natural wonders that can be handled. Visitors can stroke the soft fur of a stuffed genet or marvel at the cascade of a butterscotch-coloured moulted skin of a six-metre Burmese python. An animation shows a female praying mantis noisily chomping her way through a male from the head down. The praying mantis spent her eight-month lifespan in van der Merweâ&#x20AC;&#x2122;s company. A ferocious hunter, when presented with van der Merweâ&#x20AC;&#x2122;s finger she would alight and allow herself to be carried to the windows to harvest flies. The artist wept when the mantis died. Circular stickers on the floor of her home exhibit the extinct plant species that human footprints have erased.

At a time when Earth is in ecological peril, the images in After Life give pause for reflection, bringing to attention the natural beauty on the planet, ignored by many because of the frantic pace of urban lives. The exhibition is a celebration of the magnificence of the natural world and a reminder of humansâ&#x20AC;&#x2122; responsibility as stewards of the earth rather than its conquerors. It underlines the fact that without the natural world, we humans cannot exist.

KALI VAN DER MERWE (b. Johannesburg 1964) re-named herself after the fierce Indian goddess of creation and destruction.

Kali graduated with an honours degree majoring in sculpture from Michaelis School of Fine Arts, University of Cape Town. Post formal study, she worked in the mediums of ceramics, printmaking and sculpture, exhibiting at galleries nationally and internationally. Kali unpicked her formal art school education living an experimental lifestyle in Berlin in the early nineties. She began working with sound, filmed images, slides, photographs, light sculptures and serigraphs, collaborating with various underground collectives of the time. Returning to a democratic South Africa she extended her interest in filmmaking to become a documentary filmmaker. Based in Cape Town, her work combined social issue filmmaking with creative social development and her collaborative documentaries won multiple local and international best film and jury awards at film festivals. Seven years ago, a series of entheogen awakenings made it no longer possible to live in the noise and bustle of the city. Kali found creative refuge on a farm near the remote village of Baardskeerdersbos, in the Western Cape. In this rural space and silence, she embarked on an intense, three year series of archetypal, mythological, photographic self-portraits using light painting as a transformative technique. During this time she lost her eyesight and had it dramatically restored via cataract eye operations. Concurrent to self exploration, fynbos, indigenous forests, wildlife and insects in her immediate surroundings became subjects of inspiration, gradually devleoping into her main focus. Kali sees herself as a visual advocate on behalf of wild, fragile indigenous flora and fauna, encouraging people to observe and connect. 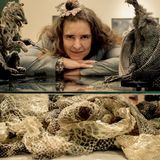 This is the catalogue for the multimedia exhibition by Kali van der Merwe first shown at Iziko South African Museum Cape Town May 12 - 30 Se...

This is the catalogue for the multimedia exhibition by Kali van der Merwe first shown at Iziko South African Museum Cape Town May 12 - 30 Se...