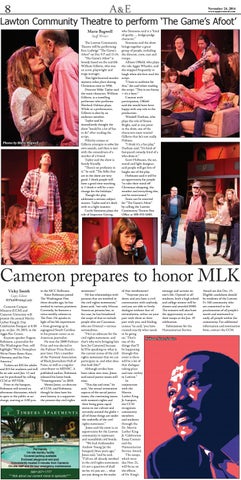 The Lawton Community Theatre will be performing Ken Ludwigs’ “The Game’s Afoot” on Dec 5-7 and 11-14. “The Game’s Afoot” is loosely based on the real-life William Gillette, who was an actor, playwright and stage manager. This light-hearted murder mystery takes place during Christmas time in 1936. Director Mike Taylor said the main character, William Gillette, is a travelling performer who performs Sherlock Holmes plays. While at a performance, Gillette is shot by an audience member. Taylor said he immediately thought the show “would be a lot of fun to do” after reading the script. Hilarity ensues as Gillette attempts to solve his own assault, and then is met with the conundrum of a murder of a friend. Taylor said the show is family friendly. “There’s no profanity in it,” he said. “The folks that are in the show are very good. I think people will have a good time watching it. I think it will be a nice change for the holidays.” Though the play addresses a serious subject matter, Taylor said it’s dealt with in a light manner. Cecile Simmons plays the role of Inspector Goring,

who Simmons said is a “kind of quirky … hodge-podge character.” Simmons said the show brings together a great group of people, including the director, crew, cast and troupe. Allison Offield, who plays the role Aggie Wheeler, said she stopped frequently to laugh when she first read the script. “I have to audition for this,” she said when reading the script. “This is too funny – it’s a hoot.” Content with participation, Offield said she would have been happy with any role in the production. Wendell Durham, who plays the role of Simon Bright, said at one point in the show, one of the characters must remind Gillette that he’s not really Holmes. “I think it’s a fun play,” Durham said. “It’s kind of fast-paced comedy, kind of a who-done-it.” Scott Hofmann, the set, sound and light designer, said people will get lots of laughs out of the play. Hofmann said it will be an opportunity for people “to take their mind off Christmas shopping, the weather and everything else, and be entertained.” Seats can be reserved for “The Game’s Afoot” by calling the Lawton Community Theatre Box Office at 580-355-1600.

in the MCC Ballroom. Since Robinson joined Copy Editor The Washington Post @PinkWritingLady three decades ago, he has worked in various positions. Cameron Campus Currently, he features a Ministry (CCM) and twice-weekly column in Cameron University will The Post. He speaks in present the annual Martin light of his life experiences Luther King Jr. Day Celebration Banquet at 6:30 – from growing up in p.m. on Jan. 19, 2015, in the segregated South Carolina to his present career as an Aggie Rec Center. American journalist. Keynote speaker Eugene He won the 2009 Pulitzer Robinson, a journalist for Prize and was elected to The Washington Post, will highlight “We’re Someplace the Pulitzer Prize Board a year later. He’s a member We’ve Never Been: Race, of the National Association Diversity and the New of Black Journalists Hall of America.” Tickets are $35 for adults Fame, as well as a regular and $15 for students and will contributor to MSNBC. A published author, Robinson be on sale until Jan. 12 and released his latest book, can be purchased by calling “Disintegration,” in 2010. CCM at 357-7226. Monte Jones, co-director Prior to the banquet, of CCM, said Robinson, Robinson will attend an afternoon discussion, which though he does have his own history, is a supporter is open to the public at no charge, starting at 2:30 p.m. the present-day civil rights

movement.“ He has relationships with persons that are involved in the civil rights movements,” Jones said, “not only African American persons but, in his case, he has broadened the scope of that to include people who are Caucasian, who are Oriental – various nationalities. “He’s an advocate for the civil rights movement, and that’s why we’re bringing him here [to Cameron] because he’ll be speaking to: what is the current status of the civil rights movement that we can participate in, and what does that look like?” Although strides have been taken over time, Jones said social justice issues still exist. “This day and time,” he said, “the sexual orientation aspects of the social justice issues, the continuing issues with women’s rights and their being given equal status in our culture and certainly around the globe – all of those things are under the umbrella of the civil rights movement.” Jones said the event is an opportunity for the Lawton community to rejuvenate and reestablish civil bonds. “We had Ambassador Andrew Young [at the banquet] three years ago,” Jones said, “and he said, ‘Y’all are all already involved in the civil rights movement; it’s not a question of shall we be; it’s you are … what are you doing in the midst

of that involvement? message and actions on “‘Anytime you sit one’s life. Opened to all down and you have a civil students, both a high school conversation with anybody, and college winner will be and you are able to freely chosen and awarded $300. dialogue without fear of The winners will also have intimidation, either on your the opportunity to read part with them or their their essays at the Jan. 19 part with you, and finding celebration. census,’ he said, ‘you have Submissions for the created exactly what needs Humanitarian Service to be going on.’ That’s Tribune News Service one of the things that’ll be happening through this event is there will be a lot of that dialogue taking place and new civility in Lawton.” In conjunction with the Martin Luther King Jr. banquet, the CCM recognizes community members and students through the Dr. Martin Luther King Jr. Celebration Essay Contest and the Humanitarian Service Award. The essays, which were due Nov. 21, will focus on the effects of Dr. King’s

Award are due Dec. 15. Eligible candidates should be residents of the Lawton Ft. Sill community who are committed to the proclamation of all people’s worth and motivated to unify all people within the community. For additional information and nomination form, contact the CCM.