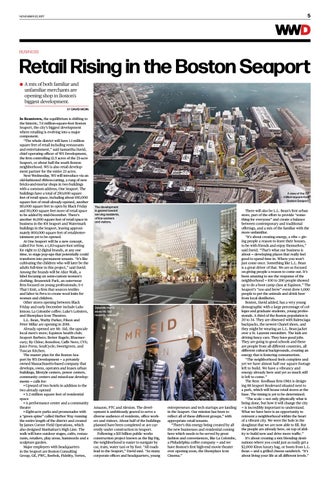 In Beantown, the equilibrium is shifting to the historic, 7.6 million-square-foot Boston Seaport, the city’s biggest development where retailing is evolving into a major component. “The whole district will have 1.1 million square feet of retail including restaurants and entertainment,” said Samantha David, chief operating officer of WS Development, the firm controlling 12.5 acres of the 23-acre Seaport, or about half the south Boston neighborhood. WS is also retail development partner for the entire 23 acres. Next Wednesday, WS will introduce via an old-fashioned ribbon-cutting, a rung of new bricks-and-mortar shops in two buildings with a common address, One Seaport. The buildings have a total of 250,000 square feet of retail space, including about 100,000 square feet of retail already opened, another 110,000 square feet to open by Black Friday and 50,000 square feet more of retail space to be added by mid-December. There’s another 41,000 square feet of retail space in business in the 101 Seaport and Watermark buildings in the Seaport, leaving approximately 800,000 square feet of retail/entertainment yet to be opened. At One Seaport will be a new concept, called For Now, a 1,113-square-foot setting for eight to 12 digital brands, at any one time, to stage pop-ups that potentially could transform into permanent tenants. “It’s like cultivating the children who will later be the adults full-time in this project,” said David. Among the brands will be Alice Walk, a label focusing on semi-custom women’s clothing; Brunswick Park, an outerwear firm focused on young professionals; S--t That I Knit, a firm that sources textiles and labor in Peru to create wool knits for women and children. Other stores opening between Black Friday and early December include Lululemon; La Colombe coffee; Luke’s Lobsters, and Showplace Icon Theatres. L.L. Bean, Warby Parker, Filson and Peter Millar are opening in 2018. Already opened are Mr. Sid, the upscale local men’s store; Equinox health club; Seaport Barbers; Better Bagels; Bluemercury; By Chloe; Bonobos; Caffe Nero; CVS; Juice Press; SoulCycle; Sweetgreen, and Tuscan Kitchen. The master plan for the Boston Seaport by WS Development — a privately owned Massachusetts-based company that develops, owns, operates and leases urban buildings, lifestyle centers, power centers, community centers and mixed-use developments — calls for: • Upward of two hotels in addition to the two already opened • 3.2 million square feet of residential space • A performance center and a community theater • Eight-acre parks and promenades with a “green spine” called Harbor Way running the entire length of the district and created by James Corner Field Operations, which also designed Manhattan’s High Line. The walk will have outdoor stages, cafés, restaurants, retailers, play areas, hammocks and a sculpture garden. Major employers with headquarters in the Seaport are Boston Consulting Group, GE, PWC, Reebok, Fidelity, Vertex,

A view of the 7.6 million-square-foot Boston Seaport. The development is geared toward serving residents, office workers and visitors.

Amazon, PTC and Alexion. The development is ambitiously geared to serve a diverse audience of residents, office workers and visitors. About half of the buildings planned have been completed or are currently under construction in Seaport. Following a $15 billion public works construction project known as the Big Dig, the neighborhood is easier to navigate by car, train, water taxi or by foot. “All roads lead to the Seaport,” David said. “So many corporate offices and headquarters, young

entrepreneurs and tech startups are landing in the Seaport. Our mission has been to reflect all of these different groups,” with appropriate retail tenants. “There’s this energy being created by all the new businesses and residential coming here which needs to be served by great fashion and conveniences, like La Colombe, a Philadelphia coffee company — and we have Boston’s first high-end movie theater ever opening soon, the Showplace Icon Cinema.”

There will also be L.L. Bean’s first urban store, part of the effort to provide “something for everyone” and create a balance between contemporary and traditional offerings, and a mix of the familiar with the more unfamiliar. “It’s about creating energy, a vibe — giving people a reason to leave their houses, to be with friends and enjoy themselves,” said David. “That’s what our business is about — developing places that really feel good to spend time in. Where you won’t just come once. Something like L.L. Bean is a great driver of that. We are so focused on giving people a reason to come out. It’s been amazing to see the response of the neighborhood — 100 to 200 people showed up to do a boot camp class at Equinox.” The Seaport’s “zoo and brew” event drew 1,000 people to pet the animals and drink beer from local distilleries. Boston, David added, has a very young demographic with a large percentage of colleges and graduate students, young professionals. A third of the Boston population is 20 to 34. They are obsessed with Balenciaga backpacks, the newest Chanel shoes, and they might be wearing an L.L. Bean jacket over a St. Laurent sweatshirt. The kids are driving fancy cars. They have good jobs. They are going to good schools and these are people from all different countries, all different cultural backgrounds, creating an energy that is fostering consumerism. “The neighborhood feels complete and yet we have almost half our square footage left to build. We have a vibrancy and energy already here and yet so much still is left to come.” The Rem Koolhaas firm OMA is designing 88 Seaport Boulevard situated next to a park, which will house retail stores at the base. The timing is yet to be determined. “The scale — not only physically what is being done, but how it will change the city — is incredibly important to understand. What we have here is an opportunity to reinvent a neighborhood within the heart of a vibrant city. We were the hole in the doughnut that we are now able to fill. But the people are already here, on top of ability to build new and drive more traffic.” It’s about creating a mix blending destinations where you could just as easily get a $2,000 Kiton luxury bag, or boots from L.L. Bean — and a grilled cheese sandwich. “It’s about living your life at all different levels.” 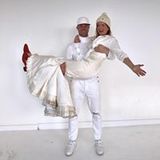