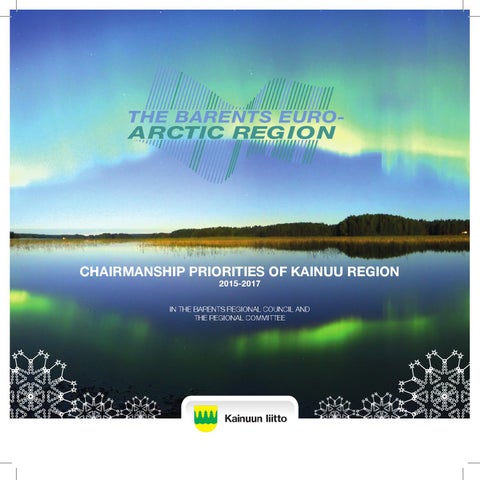 gion in BRC is to promote interaction within the Barents region and the Arctic region and to enhance the cooperation between people, different regional actors and different forums of collaboration. The Regional Council of Kainuu is the chair of Barents Regional Council and the Regional Committee for years 2015-2017. At the same time, Russia is the chair on the state level in the BEAC. The goals of cooperation have been defined in the joint Barents Programme for years 2014-2018. During the chair period of Kainuu, the following six themes or areas of co-operation will be emphasized in the activities of the Regional Council. The aims of the areas of co-operation will be introduced in this document.

As the ENI CBC Programmes of programming period 2014–2020 are starting their actions in full force in 2016, there will be good chances for developing regional cooperation in the Barents region. There are

two ENI CBC Programmes functioning in the Barents region, the Kolarctic CBC 2014 - 2020 and the Karelia CBC Programme. Developing co-operation between CBC programmes is an essential goal in developing the interregional co-operation in general. In addition to the CBC Programmes, also other instruments suitable for funding Barents cooperation, such as the NPA Programme, should be taken into account. The indigenous peoples’ participation in the activities of BEAC and BRC is important, particularly in decision-making concerning the rights and livelihood of the indigenous people.

The Kainuu Region will emphasize the following aspects of Barents co-operation • Improving functional interaction with the partnerships and EU organisations related to Northern Dimension. • Enhancing interaction with the regional offices in Brussels. • Promoting the networking, project planning and utilization of the opportunities offered by the funding programmes will be improved by developing co-operation between the programmes and improving the flow of information to the regional committee, with the aim to prepare co-financed projects. • Reinforcing the visibility and recognition of Barents cooperation through local and national media as well as the social media.

2 Promoting economic co-operation The Arctic Region has potential to become the biggest target of investments in Europe. There are lots of investments planned especially on the energy sector, mining industry, tourism, transport and logistics sectors as well as on the infrastructure onshore and offshore. Promoting economic co-operation is closely related to promoting mobility and transport connections in the whole Barents region. Economic co-operation, labor mobility, project export as well as connections between enterprisers across borders will be developed. A natural focus for cooperation will be mineral industry, forest sector, bio economy and tourism. Solutions concerning the cold cli-

mate and Cleantech are especially important for the northern environment. The need for developing ecologically sustainable solutions creates a demand for new technologies improving waste management, energy efficiency and water treatment as well as reducing emissions. Tourism is a growing business both on the global level as well as in the Barents region. ”The northern wilderness of Europe” with its highly developed services offers great opportunities for the entrepreneurs of the field and the tourists. The indigenous peoples and the rich local cultures are important actors in developing tourism related livelihoods in the region.

The Kainuu Region will emphasize the following aspects of Barents co-operation • Continuing the extensive co-operation of the Regional Working Group on Transport and Logistics (RWGTL) and its cooperation partners and supporting the execution of existing plans. • Finding new ways for boosting large-scale investment projects in the Barents region and for improving the availability of labor force. • Drafting a joint development programme for tourism (2030) based on the Action Plan for Barents Tourism with the aim of creating a joint marketing programme supported by national governments. • Combining regional marketing activities and promotion of tourism in a way that the Barents/ arctic area will be profiled as a single tourism destination for the global markets, with the aim of expanding the Visit Arctic Europe cooperation in the entire Barents region. • Removing barriers in developing tourism and other fields of cooperation, for instance, by renewing bureaucratic visa processes and by enhancing the flexibility in acquiring visas

The Kainuu Region will emphasize the following aspects of Barents co-operation • Improving large-scale cooperation with RWGTL and its various collaboration partners as well as promoting the existing plans • Focusing investments in developing the safety and functionality of existing border-crossing connections and removing the bottlenecks hindering the traffic connections. The main focus should especially be placed on the investments serving east-west traffic connections. • Continuing the development activities of the existing east-west traffic corridor Narvik-Haparanda-Tornio-Oulu-Vartius-Kostomuksha-Archangelsk-Komi. • Improving regular air traffic connections to and between the centers of the Barents region. • Continuing the development and investigation activities concerning the Northern Sea Route, northern telecommunication and smart connections.

3 Co-operation on transport and logistics

tual traffic flows. The drafting process of the joint traffic strategies in the Barents region on both the national (BEATA) and the regional (BRWGTL) level the co-operation has flowed in an excellent manner in the past years. The Kainuu region hopes that this fluent co-operation will continue also in the future, as the actions stated in the strategies will now be put into practice.

4 Good practices and co-operation in the social and welfare sector New operations models serving the regional purposes should be actively developed, for example, utilizing remote technology. The co-operation in social and welfare sector should be developed especially in the border regions. The experiences gained and good practices developed in different regions should also be made more widely known and put into practice in new regions.

The Kainuu Region will emphasize the following aspects of Barents co-operation â&amp;#x20AC;˘ Promoting health and developing new ways and techniques for producing services as joint projects. â&amp;#x20AC;˘ Organizing joint events under the theme of good practices on arranging social and welfare services

The specific features of the Barents region set specific challenges for organizing services. Sparse population, long distances within the regions, ageing population as well as the differences in morbidity and welfare within the countries are common challenges for the partner regions.

Climate change affects the vast Barents Region in many different ways and the effect of these changes is expected to increase in the future. The Barents Region includes extensive areas of boreal forests as well as large untouched, protected wilderness areas, which are unique at global level. Protecting the environment, supporting sustainable development and controlling

climate change are particular goals on the national level. Local actors and indigenous people play a key role in bringing together various different aspects of sustainable development and in implementing actions. In the field of cross-border nature conservation co-operation, the Green Belt of Fennoscandia will be developed as a part of the European Breen Belt network.

The Kainuu Region will emphasize the following aspects of Barents co-operation • Fitting together the goals of developing livelihoods and sustainable development in the Barents Region in order to gain sustainable profit from the natural resources potential as well as the arctic appeal for tourism. • Reinforcing the tools needed for implementing climate policy in the Barents Region and for the co-operation between the Barents Region and the European Union, for example, via the Covenant of Mayors. • Promoting the development of nature tourism in the area of the Green Belt of Fennoscandia.

The Kainuu Region will emphasize the following aspects of Barents co-operation • Strengthening the exchange of students between universities and other higher educational institutes in the Barents region and creating new connections. • Founding new, joint Master’s programmes, Doctoral programmes and research programmes in order to boost the development of livelihoods and to increase the mobility of researchers in the northern regions. • Improving the mobility, visibility and cross-border co-operation of cultural actors. • Increasing the activity of young people and their influence groups in exchanging experiences and supporting their internationalization. • Supporting the productization of culture for example for the needs of tourism as well as for cross-border cultural and sport events. • Promoting the cultural co-operation between the Finno-Ugric peoples and indigenous peoples in the Barents region.