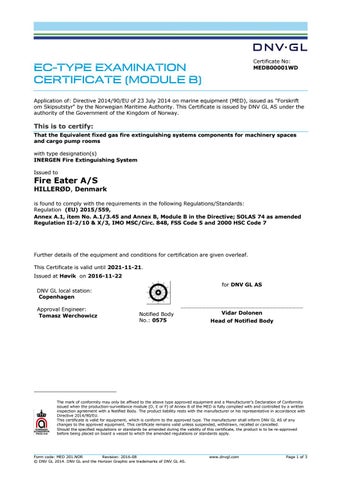 Application of: Directive 2014/90/EU of 23 July 2014 on marine equipment (MED), issued as "Forskrift om Skipsutstyr" by the Norwegian Maritime Authority. This Certificate is issued by DNV GL AS under the authority of the Government of the Kingdom of Norway.

This is to certify: That the Equivalent fixed gas fire extinguishing systems components for machinery spaces and cargo pump rooms with type designation(s) INERGEN Fire Extinguishing System Issued to

Further details of the equipment and conditions for certification are given overleaf. This Certificate is valid until 2021-11-21. 

The mark of conformity may only be affixed to the above type approved equipment and a Manufacturer’s Declaration of Conformity issued when the production-surveillance module (D, E or F) of Annex B of the MED is fully complied with and controlled by a written inspection agreement with a Notified Body. The product liability rests with the manufacturer or his representative in accordance with Directive 2014/90/EU. This certificate is valid for equipment, which is conform to the approved type. The manufacturer shall inform DNV GL AS of any changes to the approved equipment. This certificate remains valid unless suspended, withdrawn, recalled or cancelled. Should the specified regulations or standards be amended during the validity of this certificate, the product is to be re-approved before being placed on board a vessel to which the amended regulations or standards apply.

Product description “INERGEN Fire Extinguishing System”, Is a fixed gas fire extinguishing system using fire extinguishing agent Inergen stored in cylinders and distributed through pipes and nozzles. The extinguishing concentration and Fire Eater Inergen nozzles are covered by this type approval certificate. Documentation for the other system components shall be submitted and approved for each project. The system is to be designed in accordance with IMO MSC/Circ. 1267 and the gas is to be produced by a maker certified by Fire Eater. Inergen Physical properties Type designation

Application/Limitation The design concentration (based on oil fuel) shall be minimum 46.2 % (applied on a net volume) and the maximum agent discharge time shall be 120 seconds for 85% of design concentration. The extinguishing system shall be designed and installed according to SOLAS Ch. II-2, IMO MSC/Circ.848 as amended by IMO MSC.1/Circ.1267 and the Fire Eater manual. The following additional limitations will apply: A. Inergen is approved for use in engine rooms, cargo pump rooms (hydrocarbon only) and similar spaces. This certificate does not address use of the system for protection of cargo holds and cargo handling spaces for other cargoes than oil (alcohol, LPG, LNG). This will have to be considered by the applicable Administration on a case by case basis. B. Evacuation time and warning procedures as per IMO MSC.1/Circ. 1267, 6.2 should be considered for each project. In no case should the design concentration exceed 52% (net volume, maximum expected ambient temperature). C. Steel storage cylinders are available with sizes of 2 litre to 80 litre at 200 bar or 300 bar. Cylinders being 81 litre or larger is only accepted when arrangements are provided on board to ensure that cylinders can be easily moved (even to shore) for service and recharging. D. Cylinders are to be delivered with product certificate acceptable to the flag administration and class in question. E. Cylinders to be located in a separate room in accordance with SOLAS Ch. II-2 Reg. 10.4.3, or distributed throughout the protected space in accordance with the requirements in IMO MSC/Circ.848 item 11as amended by IMO MSC.1/Circ.1267. When distributed within the protected space, the minimum extinguishing concentration (after any single failure) shall be 35.6 %.

Components in the system will be regarded as pressure class I with a maximum design pressure as per the hydraulic calculations for each project. Consideration will though be made for piping and couplings inside the protected space. Nozzles type 2104xx or 2105xx are to be used. These nozzles are made of brass or stainless steel and the initial pressure at the nozzles is typically 75 bar (and less than 20 bar after discharge of 85% of the agent). The nozzles are to be located in accordance with the Fire Eater Inergen Design, Installation, Operation and Maintenance Manual. The maximum coverage height for a row of nozzles is 5 m. Horizontally, a basic rule is that nozzles can be installed in: (a) a grid (360° nozzle - directed downwards) with maximum spacing of 8.0 m, or (b) vertically (180° nozzle), covering an area of maximum 5.0 m x 5.0 m Bilges (except open bilges in small volume engine rooms) are to be protected with a dedicated nozzle network.

The following documentation is to be submitted to the flag administration in each case: 1. Plans showing location of cylinders, piping, nozzles and release stations as well as the assembled system. 2. Inergen capacity calculations, including hydraulic flow calculations. 3. Plans defining release lines and alarm system. 4. Specification for piping, valves and other components in the system. 5. Ship specific release procedures and post discharge ventilation procedures. 6. The manual containing design, inspection, operation and maintenance procedures. 7. Control arrangements for closure of openings and stop of fans and any pressure relief devices as per IMO MSC/Circ. 848 as amended by IMO MSC/Circ. 1267, item 13. These plans can also be supplied by yard. Testing at installations and periodical surveys The system shall be tested as per maker’s manual both at installations and at periodical surveys. The minimum test pressure is minimum 1.5 time the design pressure (200 bar or 300 bar for any closed sections, according to hydraulic calculations for open sections). The system is subject to inspections every 2 nd year by an approved service supplier. The attending surveyor will also apply requirement relevant for flag administration and / or class on newbuildings and ships in operation surveys.

Marking of product The nozzles and other main components in the system are to be marked with name and address of manufacturer, type designation and Mark of Conformity (see first page). 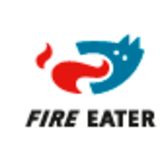