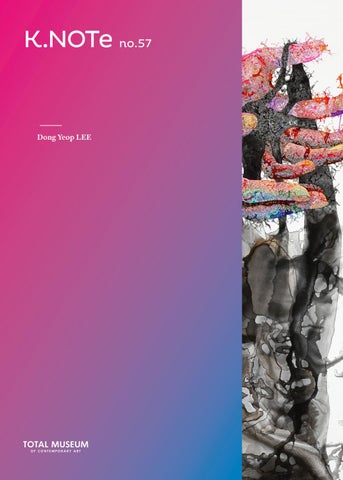 1. A sense of distance toward art was not felt when dealing with the artworks of this young artist- Dong Yeop LEE. His work suggests a belief that the value of art can be found in a relatively simple and small world; rather than the traditional attitude of being extremely sublime, or pursuing the historicality towards arts. It is indeed time to reflect the fact that while many artists tried to depart from themselves intending to find the pictorial truth in the outside world; yet there are a small minority of artists have been questioned themselves in their inner world. However, what LEE has attempted to deal with in his inner world was neither the problem of ego, emotion nor psychological aspects; rather, he has been focused on the problem of the “body”, which is located nearest to himself. Along with the process of growth, we are gradually accustomed to discussing about a more complex world. When it is said that it is a way to grasp the world properly; LEE puts on breaks to change the direction of thinking, he then asks the most basic yet most important questions that how “we” and “our existence” on the earth become even possible. He implies not that there is anything in the World of Peace; rather the world becomes possible just because of the existence of our “body”. LEE also mentioned, if you are alive, there must be a mechanism that keeps human body remaining at its best. In this respect, he suggests the “body” is almost equal to “human life”; and he did not let himself stop here, he further broadened this fact into an artwork. The fact that the function of a society is similar to the human body 12

has been a source of inspiration for many artists. Therefore, the scope of art work based on this fact is also very diverse. Even taking this fact into consideration, LEE’s work still gives a fresh sense of space. To be honestly, perhaps I feel like that way just because his works are differentiated from such type of work. It is not hard to find artists who are dealing with the human body, and finding the meaning of the work there. But in his work, the unique vitality and liveliness can be found through work materials and production methods he uses. LEE’s work seems to be the connection between flowing liquid and tissues; a very interesting reflection of the subtle and organically connected patterns. The re-interpretation for the things he always look at, a nostalgia for the past, or even the comfortable attitude that could easily be exposed to trends were thoroughly excluded from his work.

2. Past and present artists’ interest towards human body has been proven by the history of art, though they have been dealing with body in different categories and methods. In the physical world of the organic composition, body, there is absolutely a factor which makes people deeply sink into it as it gets more complex. If so what does the human body mean for LEE? This is not a futile question to anyone who has thoroughly appreciated his work. When human body is defined as a substance consisting of water, protein, fat, and carbohydrates, the path of art will no longer be advanced. Because he considers, at least, as an artwork, has to be able to best represent the beauty of nature or the spiritual side of mankind. He believes that this “body” surrounded by the organic body, can become a field of well-crafted art. He keeps the secret of art there; meanwhile, evoke and awaken the fact that we were closing our eyes. The ideas of the arrangement of DNA, cells, and chromosomes in the human body come up with his work. Such elements are unperceivable by naked eyes; they are 13

also objects that we do not remember day by day, or do not pay much attention to until some unexpected situations occur. At this point, the moment when facing it, I got an unfamiliar feeling as if I encountered the lives of the outer world. LEE induces us to a world of such shapes and colors that are grotesque; at the same time beautiful. Furthermore, the abstract pattern tells you the fact that it is an element that forms the body without exception, and it is also an aesthetic object with itself. The shape of the blood vessels, tissues, and various layers of cells looks like a panorama unfolding beyond the microscope lens. Such a precise and vast feeling given from the world reflecting that he guides us to deeply immerse ourselves. An organism composed of a combination of innumerable lines and colors does not have enough clarity to connect with our everyday life. However, when these elements are put into the shape of the human body, it is not overlooked that it is a key point in activating into the human body. Of course, what LEE is dealing with, is not a sketch of real blood vessels or cells; but sometimes an organism that is transformed, and does not exist in real world. And so, somewhat his work naturally comes up as illusion. The panorama of human organ tissue covered by LEE is also effectively linked to the material aspect he uses. The water that makes up most of our bodies and the water-soluble inks that he uses are consistent with the direction in which the work is intended. The ink, which is the main material of his work, has its own fluidity, and if it is not confined to any form, it will flow or spread in a certain direction. It would move in a certain direction even if when it is just slightly unbalanced, the pressure is increased or decreased, or the action of force is made. Everyone once experiences a phenomenon that, the ink or watersoluble paints are spread out in a certain direction when it is dropped on the drawing paper and blown by the wind comes from our mouth. The concrete method may be somewhat different, but overall; he uses the inherent playful characteristics of such water14

soluble pigments to create a more extended concept of space. LEE expresses his work as an automatic technical drawing, which is referred as the result of unconscious acts that serve as a kind of outlet for psychological emotions of suppression. The organic pattern, which is appropriately distributed according to the difference of the density of the water-soluble pigment or the area and the position of the space, shows the possibility of being infinitely free from the composition of the canvas. Just as the world of ink shows a complex layer of color that cannot be represent by merely just black color; also just as a drop of ink being dropped into the water, the decomposition of ink gives rise to proliferation, rhythm, and sense of motion in the water. Accordingly, his work induces to the expansion of the contemplative gaze on the problem of human and organic body. The work of Dong Yeop LEE suggests that the physical world is equal to the spiritual world, which is also referred to the â&#x20AC;&#x153;wholenessâ&#x20AC;? surrounds us. Art & Criticism (2014, Summer)

Dong Yeop LEE Dong Yeop LEE majored in art education (western painting) in Korea University in South Korea and received a MA Fine Art in Chelsea College of Art and Design, University of the Arts London in the UK. He participated in 13 internal and external solo exhibitions, many group exhibitions and art fairs. He was selected in multiple galleries and art museum's contest exhibitions. He lectured at Korea University, Sejong University and Catholic University of Daegu. He co-wrote his book titled <Expression of Emotional Child with Pictures>. Also his works were provided to British Airways Calendar Artwork (Korean edition 2016, 2018) and SBS dramas : “Cheongdamdong Scandal (2014)”, “She is so lovely to me (2014)”.