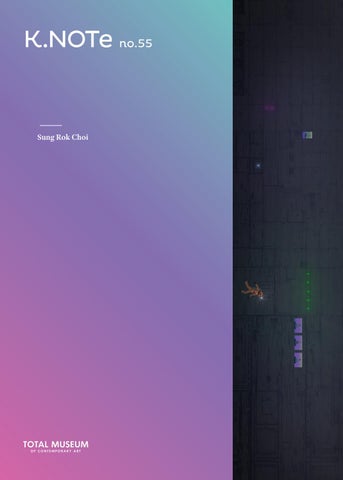 Haeun Lee Intern Jisu Hong, Sooeon Jeong Designer Flaneur Sponsor Arts Council Korea Date of Publication November 2018 ÂŠ Author and artist The reproduction of the contents of this magazine in whole or in part without written permission is prohibited.

single-channel video works in which a camscope is used to take blown-up pictures of trivial everyday objects that escape our attention, turning them into alien landscapes in which reduced figures are place like tiny moving organisms. Through his characteristic imagination and an artist sense that takes advantage of digital video technology, he visualizes how the rules and

A vast, open landscape. Once immersed in it, the eye begins

restlessly moving, following a tiny dot that wriggles like an insect

absolute standards, what the limits of anthropocentric thinking

at the canvas’s dead center. From high-resolution landscape images

are, and how fleeting and limited human beings are next to the

to works of animation produced through digital painting, the third-

grandeur of nature. This was be carried on into his 2015 solo

party perspectives cut horizontally and vertically at distances that

exhibition A Man with a Flying Camera (2015), his I Will Drone

are impossible to pinpoint; they seem at first glance to contemplate

all things, yet at the same time do not allow a fair perspective on

exhibition Savior’s Road. This world view Choi adopts toward his

his interest the visual culture through we experience images

and the physical and optical distance that emerges naturally from

today, embarking on an ongoing exploration of the principles

them. His recent use of drones as a chief medium and material for

by which it operates -- and resulting problems of perception --

his work has become a way of representing this perspective with

within the close-knit relationship of individual microhistory and

even greater sophistication, overlaying another narrative and

interpretive perspective onto his work.

periphery. The vast world in which they exist. A certain distance

attitude toward different genres, as well as his time spent exploring

and unidentifiable perspective that help us gaze up them. Video

identity as an individual, has had a complex influence on the

images and sound that painstakingly convey the dark underside

development of narrative and expansion of perceptive domains in

of the world, like a brutal fairy tale that seems pleasant on the

his work. For his first solo exhibition in 2006, he presented The

surface but is anything but comical. These characteristics have now

Rover Project. Focusing on the robot used in an NASA probe

established themselves as a clear artistic language in Choi’s video

of Mars, it involved producing, reconfiguring, and visualizing

work, something made possible through the work he has presented

plausible information into a complete story structure. The artist

in sculpture, painting, and video form since the early ’00s. Some

years through 2010. Offering a complete picture of the formal

experiments in painting, sculpture, and video the artist had

2004) -- created by totally disregarding the assembly manual and

attempted since the ’00s and his personal interest in science and

intended purposes of the parts for a plastic model, and creating

technology, it was important in marking the emergence of a clear

imaginary shapes instead -- and in his Microscenic series (2005) of

narrative structure to his work. Choi would go on to use his study 7

Painterly yet in motion

Choi Sung Rok originally specialized in painting. While most

(2010), which he presented while in graduate school, is a project

of the works mentioned above ultimately adopt a video format,

that shows how the artist’s very personal interests have revealed

they are fundamentally produced through digital paint, or

their meaning within fragmented recollections across generations

deal with issues commonly discussed in the painting tradition:

as they have interacted with trends in macro-level history. Here,

reality and illusion, principles of perspective and optical illusion,

two-dimensionality. Rather than dwelling on perfect realism in

his depiction of objects, he maintains the formal quality of the

(Rainbow Bomb, Vomiting Yellow and M16; The Portrait of

image, yet uses animation effects to experiment in different ways

Chois; and Historiography of Chois, 2010) to show memories

with issues concerning perception of the image in the digital

and images of the war experienced directly and indirectly across

environment, and the methods by which objects are visualized as

three generations and nearly 100 years from his grandfather to his

a result. A case in point in Scroll Down Journey, which indirectly

father and himself. The artist’s in-depth exploration of his interests

shows a critical consciousness toward the ways in which a

becomes an exploration of his own identity as an individual, within

generation used to the digital images produced by the navigation

which the microhistory experienced by himself and his family

devices or games perceives images and movement in real and

naturally meshes with the macrohistory experienced by those

virtual space. To achieve this, the artist uses digital painting to

generations in the modern and contemporary eras, creating an

even greater sense of solidity in the work’s narrative structure.

into two-dimensional maps, which are then given motion effects

This, in turn, is linked and expanded into an interest in the

screen appear to be exploring the space on the map. In so doing,

of history, society, and culture and from the media. This is

he cautiously touches on the changes in memory and perceptual

manifested in the later Daedong River Slayers (2010) through the

systems that arise when real-world spaces with various sensory

reconstruction of a historical incident; in Call of Duty: Operations

stimuli are perceived as being a flat, two-dimensional world, as

(2011) through a media-adapted lampooning of military culture; in

Scroll Down Journey (2015) through a confession about ambiguous

absence of direct experience and memory.

identities in a digital generation used to virtual spaces; and in the

portraits of modern individuals roaming endlessly on the boundary

between virtual and real spaces. More than anything, the thematic

is the way he uses multichannel digital projection to present

consciousness -- variegated through this narrative expansion -- is

rendered even more persuasive through elements that have become

vertical perspectives from drones to propose different ways of

important formal characteristics of the artist’s work: the painterly

animation and video work, and the active use of digital media and

both centered on a panorama-view images recalling something

out of a video game, yet they adopt an approach in which 9

particular incidents are positioned all around the screen, taking

place simultaneously until at some point they come together

again within the overall rising action of the image, functioning

together with records of fact and the contemplative recollections

ultimately as one grand narrative. The use of sprawling panorama

views creates situations where the intimate relationship between

and states to create new historical, cultural, and philosophical

part and whole is ostensibly fully visible, yet its breadth exceeds

landscapes.” Indeed, the unfocused perspective within the crisp

what can be perceived in detail all at once by the human eye. The

video image and the anonymous situation, in which subject and

object have become difficult to discern, lead the viewers’ gaze to

shardlike in their nonlinear deployment throughout the screen;

rove endlessly over the image’s surface.

each possesses an independent symbolic meaning, confounding the relationship between part and whole. Like an electronic

display, a screen in the right corner of Operation Mole-Endgame

provides real-time commentary on the events happening through

meaning “everything is visible.” As if to underscore this, Choi

the video, highlighting this vague connectedness between part

and whole. Despite the high resolution of the images, the distance

reality -- that capture reality itself -- yet constantly questions the

created by the panorama views makes it impossible to perceive the

issues of experience and perception that arise as a result. In an age

parts precisely, resulting ultimately in a situation where the whole

cannot be clearly understood. In this, it echoes the intentions of the

technology is quickly reaching the realm of excess, what does the

work, which alludes metaphorically to a tragic conclusion: despite

human being gain and lose, enjoy and dread? Interestingly, while

advancements in their social systems and mechanical civilization,

the artist speaks of a reality in which we repeatedly encounter

humankind will not be saved, but will face times of catastrophe due

memories and experiences of the real world -- and a loss of

to the destruction of nature and loss of humanity.

subjectivity -- within today’s digital image culture, he never lets go of his playful attitude and perspective toward a technological

In contrast, the A Man with a Flying Camera and I Will Drone

civilization that never stops racing forward. Even as he revels in

aerial photographs of the artist himself. While the backdrops and

images and the sensory joys that it will bring, he also trenchantly

figures in the video call to mind the digitally simulated spaces

analyzes the senses that are lost or degraded within it, and our

and imaginary characters of a computer game, the space is one

rapidly changing systems of perception. In a sense, this may be

that actually exists, and the figure is the artist, a living, breathing

a way in which the sublime and rapturous experiences of the

human being. The drone itself is never directly shown in the image;

technologically granted playfulness and imagery in his work can

with its surveilling perspective from a defined location, it is merely

coexist with his examination of our ongoing loss of judgment.

posited as an unseen entity, a kind of phantom. In the process the artist repeatedly transposes the position and meaning of the agent at the blurred boundary between virtual and real space, 10

Sung Rok Choi Choi Sung Rok has explored contemporary landscapes generated by technology as well as narratives through digital animation and video. In addition, witnessing an increasingly digitalized world, he has continued to explore the kinds of beings humans are perceived as and focused on changes in the relationship between continuously developing technology and humans. His recent solo exhibitions include ‹Operation Mole / Final Stand›(2018) at SeMA Bunker, «Savior’s Road»(2016) at Space XX and «The Height of Phantom»(2015) at Gallery Chosun, and he has also participated in Ars Electronica Festival 2017 and the group exhibition «Project 2» at the 2016 Busan Biennale. He was a finalist for the 2nd VH Award(Hyundai Motor Group, 2017), received the AHL Foundation’s 8th Contemporary Visual Art Competition Award(New York City, 2011), and was selected for the Seoul Museum of Art Emerging Artists Support Grant (2015).