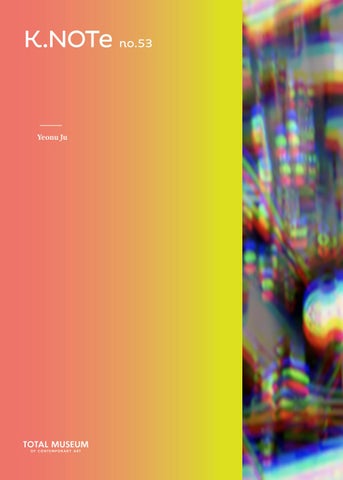 “The past carries a secret index with it, by which it is referred to its resurrection.” Walter Benjamin, <Teses on the Philosophical History> 1. Addressing a Mutable, Uncertain Human Existence of Unpredictable Anxieties The publics that have consumed media since the age of industralization have often ingrained the habit, when something existing hic et nunc becomes interlinked with media, of naive and unquestioning trust that every individual within the special power relation of so-called  “new media” and consumer is reflected in the new media. This faith is the product of an ideology of technological dominance over human reason, one that imbues the notion of media being advanced technology-intensive products of scientific development. In this sense, the artist Ju Yeonu’s new work Swarm Circulation(2016) could be described as a polemical work that uses the short experimental format to present the process of audience regeneration through the production and expansion of the media that we trust in, as well as a critical perspective on the media civilization conferred upon it. An example is the way that it wears the cloak of a metaphor on the recycling of media devices as it shows the stark contrast between the historical production process and factory manufacturing line for the TV monitor hardware on one hand, and poor residents of an underdeveloped region of Africa picking through that hardware in a mound of burning monitors, in what might be called a metaphor for the “shell of media.” Yet the idea that the artist actually wishes to convey with this analogy is not that of recycling, but that of circulation. The artist, in other 6

words, is using symbolism to show the circulation of media devices. The key visual running through this video work may be the ironic image of cathode ray types and computer parts produced over history becoming the final destination for impoverished results of a backward community, people who are constantly picking their way through a burning heap of rubbish in search of something. These are the “shells of media” -- a term that does not only refer not to hardware that has outlived its use, but provides an indelible metaphor in which the gazes of all the people who received or consumed the vast amounts of data that passed through the TV tubes and computer parts, all the images that once lit up the monitors, seem now to be burning and discarded. The countless facts and wondrous scenes with which those devices once bewitched or transfixed their audience (the agents of consumption) in their healthier days have now outlived their use; the circulation process of their discontinuation, as the experiences we once trusted and believed disappear in clouds of smoke at a waste site, is expressed through its likening to the natural phenomenon spanning from a life form’s organic emergence to its death. Would it be reading too much to conclude that while the “trends” that once commanded the media generation’s faith and trust -- directed or contained by the components of that hardware -- have now disappeared in smoke, leaving only their shells (as the “circulation” keyword suggests), the actors who emerge faintly from this phenomena and vanishing are not, ironically, addressing the system of fixed and unchanging truth that we once believed and trusted, but a human existence that has always been mutable, uncertain, and filled with unpredictable anxieties? 2. An Artist’s Hand Shape “Meaning” with Invisible Sculptures Ju Yeonu’s work Swarm Circulation falls in the category of experimental films adopting a found footage format. Found footage is a domain of cinematic practice that involves taking video footage and image by others and repurposing them artistically within a new 8

context. Nicole Brenez , an expert in this field, identifies the genristic characteristics of found footage in terms of three aspects. First, they create a new form of montage through expansion of previously filmed and edited images into new domains. Second, their aesthetic emerges from manipulating archive footage and images per se by hand as a kind of material. In this, they are similar to the conceptual approach that a sculptor adopts before his or her material. Third, found footage presents images in a new montage form to embody some autonomous meaning. The unique quality that Ju Yeonu applies here may be her aesthetic touch in manipulating the images by hand as her material. The role of the artist as it exists beyond the discourse of high technology demands a process of deep contemplation of works of art in the age of digital reproduction. In terms of the traditional importance of the “hands” once provided by the artistic craftsman, the reproduction age has resulted in the implications of “data” in the artwork, and the derivation and repurposing of that replicated data, becoming far more important aesthetically even than the role of the artist’s hands. When data derived from replication is placed in a different context, its meaning produces another new meaning that arise from the divide with the original material. Yet we can find significance in the way that Ju’s work offers a portrait of the artist in the digital age by once again calling to mind the continued significance of the artist’s hand in this area -- the basic attitude of looking at that artist’s material (i.e., the basic material of artistic pursuit of pursuit, which here must be seen as the image itself). In short, can it really be a coincidence that Ju is showing us an artist attempting to use “data” as a material to show the contours, however faintly, of dawning possibilities in artwork for the digital era? The aforementioned artist’s hand may be a kind of metaphor for the attempt to actively “handle” data-based materials, not simply as something understood by invisible online algorithms, but as material from an aesthetic perspective. In that sense, I wish for the reference to the artist’s role in the digital era artwork to be understood as a kind of evolution that takes place as the overall aspects of attempts to deal 9

aesthetically with materials that once relied on the traditional artist’s hand converge on the digital era. As an artist, Ju Yeonu may therefore be described as having lifted the found footage genre of experimental filmmaking to a different level -- in that her work recalls the artisan in its treatment of digital era data material, yet is an unseen creation consisting of the aesthetic meaning derived from it. Meaning, in other words, is the nature of the new form it seeks to inscribe. As an example, the artist’s recent work Swarm Circulation consisted of three subjects. The first is the process of manufacturing electronic products; the second includes televisions, newspapers, advertisements, and illustrations; and the third is the scene of incineration at a disposal site for electronic waste. What is noteworthy here is the intrusion of the first and second thematic elements between the first and the fourth or fifth frames. Happening in a short time, these changes in scene create a constant flickering effect on the screen as the work is playing. The effect may be said to lie in the use of montage to organize the relationship between rapidly segmented shots at the frame unit and the shots as a continuum. This flicker effect, moreover, has the aim of clearly showing one characteristic of the digital era, namely the way it has enabled manipulation of temporality. As mentioned, the images once contained in what might be called the “shells of media” -- the parts that have outlived their usefulness -- were once consumed by countless people, once deeply trusted as a form of consumption. Yet spent media, like so many other products in late capitalism societies, end up abandoned and forgotten. All of the images those parts once accompanied have become spent already them. It is here that Ju Yeonu’s theme comes alive once again. In the smoke smoldering from the heaps of seemingly dead parts, newly inscribed image survive and are reproduced. In other words, the people picking their way through the parts amid the ruins of dead images must be attentive to their status as marginalized people. It is for this reason that the dialectical montage between discarded images and marginalized people generates new and 10

striking images, which both represent the work’s theme and recall an endless cycling and return. As these truths, poised for a grim burial in history, become synchronized with the peripheral people bearing witness to them, the short experimental film is at that moment elevated into a visual anthropological record bearing a humanistic perspective. 3. Toward an Evolution of a New Depth In Ju Yeonu’s Swarm Circulation, the collective movement of bee swarms serves as a metaphor for the masses as agents of consumptions, skewed as they are to the technology - and hardware - intensive industries of a modern society swarming to the media periphery. Though brief and condensed, the chronicling of the production process and consumption attempts a sophisticated use of the organismic cycle as a symbol, using a powerful sequence of images to accompany the theme. The fast-paced presentation and parallel treatment of themes are excellent ideas to capture in the new formal aesthetic of found footage. The reason that experiments in archival footage seems to have produced excellent examples of research and attempts to identify themes lies in the highly planned use of images. The juxtaposition of various commercials for electronic products and footage of their disappearance, for example, applies a techniqueof dialectical montage our blind worship of technological supremacy, the things we were once so skewed toward. The resulting broadening of the theme and denotation to allow us to imagine perspectives critical of technology and civilization is something that would surely be difficult to achieve through anything other than a profound thematic exploration. The artist’s profound attitude and research, in philosophical terms and in terms of the history of civilization criticism, is enough to replace anticipation for her next work with a sense of trepidation. As a critic, it may be for me alone to wonder just where Ju’s artistic world will evolve next, and with what kinds of depth.

Yeonu Ju Yeonu Ju is a Seoul-based artist and filmmaker. Ju experiments and practices with cameraless filmmaking. She uses the archival footage to explore the joys and dangers in the appropriation of images. She interested in the relationship between technology and human beings, especially in the context of digital technology. She has presented her work at museums, galleries, and festivals worldwide, including Alchemy Film & Moving Image Festival, Experiments in Cinema, JeonJu International Film Festival, Haverhill Experimental Film Festival, ULTRAcinema, the Total Museum of Contemporary Art, and INSA Art Space.