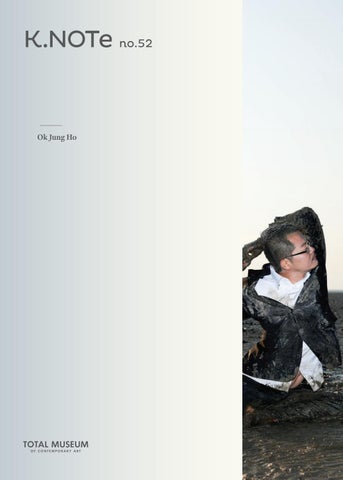 “That is when we hung our zither on the willow branches on the hill near the stream of Babylon” _HAM Seokheon, extracted from Queen of Suffering: a Spiritual History of Korea OAK Jungho’s Long Jump is an installation of five photographs that captures a series of postures in a long jump, arranged as if the subject were frozen in a sequence of movements along a trajectory. It shows the arrow of time as if frozen, but in reality, it symbolizes the allegory of a ‘locked circulation’ that has fallen in a hole (well) of time. The man jumping inside this time is a colonizer who has hypnotized himself. However, it is not a mirror but a well. The symbol of the well myth signifies a metamorphosis into another existence — but here it is locked. The flash of

metamorphosis is Eolvit(얼빛, the light of a spirit). In the well, like the darkness inside of a cocoon, OAK Jungho repeatedly attempts the circulation of metamorphosis. However, he remains in the same spot. From these contradictions of remaining in the “same spot,” I think about the Korea of today. In a reality troubled by growth, barbarism, capital, and destructive violation, the light of a complete metamorphosis cannot emerge. And yet he wears “white tight suits” and does not stop his anti-ego of attempting a metamorphosis into a “white existence.” This might be the transformative magic of disguise. Who is ‘he’ who still inquires

into the relentless well of creation (衆妙之門, the mysterious gate)

towards metamorphosis as single creation? 4

The photographic series The Noble Pose captures a moment of

levitation – the soaring upwards from the world of the Jena(제나, ego). The gap between the artist, his posture and people who recognize reality (of Korea) in the background walk a tightrope between the descent, levitation, performance (in OAK’s style), kitsch, and surprise — the artist is quite serious, exquisite, and noble. In his artworks (photo/video), he always appears as “himself (OAK Jungho).” However, unlike an “existing him” in his early satirical works, in these works he appears as a “non-existing him.” An “existing him” presents a loud singing towards the contradiction and irrationality of chaotic fantasy, hype, making fun of the artist’s popular mythology. On the other hand the works of the “nonexisting him” presents a “white existence,” because the ego’s Eolvit soars above the real like the well of the world (ocean and earth), the tree of life (the top of a mountain), and mṛgadāva(鹿野苑 , a huge

rock) (a flat stone and the rooftop of an apartment).

In this situation of soaring, where he jumps with both arms stretched and palms up, is a yearning for possession by spirit and ecstasy. At one moment during a long jump dance, the shaman becomes the “bright Eolvit” without ‘self.’ The brilliant and bright Eolvit is white light. The “white existence” of that light is the god of healing and the deity of “being by himself (nature),” like in the Baengnokdam Crater Lake of Hallasan Mountain. In a place that swaps out an ‘existing’ him towards ‘non-existence,’ although it might be a symbol of sacrifice, he conducts an exorcism performance of transformation and metamorphosis from being a

“Vin-Tang (太虛, Great Void)” to a white existence. And that is it.

His works, suspended in the moment of ‘shamanism,’ mediate the heaven and earth. What can we see and hear from this posture that

seemingly stops in an instant, without a single word from the Eolvit? The world of ego is the world of agony. In this state people pursue the animality of greed, anger, and folly. We all endure, because a human cannot escape from this noxious danger of desire and 6

the evil deeds of killing. The rotten, standing water of the Four Major River Project continues to flow into the river. These are evil doings; the ecosystem of the sea is destroyed under the name of the National Project of the Saemangeum development; the urbanism of artificial nature is promoted as an utopia while degenerating into a capitalist colony; people destroy sacred mythological sites for tourism, saying it will upgrade our quality of life; the authority that encourages a life confined in the structure of an apartment is

also an doing evil. “Evil doing (作惡)” is a building of evilness and a raising of evilness. This evilness raises animality, and an animality that grows reveals this evilness. This is the world of the Jena(ego). Like how the shamans of Tungus wear a crown of deer horn and dances, the artist dances in a tight white suit. The ancient shaman’s dance comes to OAK Jungho, becoming a jump. Perhaps between his dances, the ego of ‘OAK Jungho’ is freed from the clothes of the ego and become the Eolvit. I believe that a symbol lies in the subjecthood and existence of the “tight white suits.” Otherwise, the “non-existing him” is the Eolvit — without the clothes of an ego, and only in the state of the Eolvit the “white existence” of tight white suits exists. The site of the well, the tree of life, and mṛgadāva are the places where the ego of animality transforms into the

Eolna(眞我, True Me) of divinity as the flash of the Eolvit bursts

out. Interestingly, OAK Jungho uses these sites, that might have

been ancient sacred places in the past, as the concrete realities of today, recognizing that the existence of a Eolna, paradoxically, does not discard the “real world.” The paradise of Buddha lies in this world, and the heaven of Jesus is on this earth. Buddha land is here upon my feet, and the ‘heaven’ of Jesus can be built right here. Religious scripts state this fact. Owned by Art Institute of Chicago, Altarpiece from Thuisonles-Abbeville: The Ascension (1485) depicts the scene of “Jesus ascended to heaven.” The ascending Jesus leaves footprints on the top of a mount of olives, reminding us of Buddha’s foot sculptures – made in an early era when the statue of Buddha was prohibited. 7

The footprint is the existence of the “non-existing him.” ‘He’ always stays here as a ‘non-existence.’ Here is the reality. Here is the world of the ego. We practice baptism to communicate with ‘him.’ The single channel video The Noble Spirit presents his baptism as water torture. From the face before and after going into water, we doubt whether it is the noble man’s Eolvit or not. OAK Jungho also performs a “three steps, one bow” pilgrimage on a treadmill. His ascetic attitude, which repeats the gesture of walking, bowing, and falling down, directs us towards reading this as an act of nobleness, but it also seems ridiculous. He names this series of works made in 2015 ‘Hamartia.’ ‘Hamartia’ is based on the narrative of downfall. The main agent of this downfall is himself. His errors, his weakness, and his tragic flaws eventually cause his own downfall. However, the original concept of this Greek tragedy begins from the tragedy where an exceptional main character makes an “error of judgment.” In a drama, a tragic situation leads to certain inevitable results where coincidence, destiny, and ignorance intermingle. Where then is the target of such an ‘asceticism’ of the soaring dance of the ego that metamorphoses into a white existence of the Eolvit? Or does ‘he’ really metamorphose into a white existence? ‘Yoga Project’ (2011~13) comes before ‘Hamartia.’ In these works that depict the ego of metamorphic magic or the practice of art as a “vain effort,” we can find evidence of an ego that dreams of metamorphic circulation. Yoga includes motions where the existences of the ego conduct the Eolvit. Because the light of spirit is the light of enlightenment, it bursts apart when an ego metamorphoses into Buddha, Eolna, the man who found enlightenment). OAK Jungho becomes a salaried worker and performs a form of ‘vain’ yoga. Each motion of his yoga is done so in a very calm manner, such that affect is not openly exposed. The hands, feet, and clothes covered with mud and the movements of his body are ‘errors’ of this “relaxing posture.” Is there no human nature that is essentially pure by

undergoing a self-disciplined practice from the outset? “處染常淨 8

(lotus, maintaining purity even in dirt)” is the symbol of a pure human nature that cannot be smeared with mud, although one still performs a form of vain yoga on this mud. This pure human nature is Buddha and Eolna. Secularity blackens the seed of a true me in the background of the ego. OAK Jungho’s works reach into the present by questioning this Eolna of white existence — the white light of this blackened water. A satire on secular reality expands through this meaning that slices like a knife and subverts behind ‘humor.’ With his body as one creation, he performs a dance of exorcism that shakes the reality of “evil doing.” This dance should not be danced alone. It should induce the dance of a “subjectivity of each other.” Then, it will brighten the Eolvit of all soaring creations, not only of one. I believe then we will see what comes next to “non existing him.” Yoonsuk Choi is not an artist who can be pigeonholed within any one genre. Through his various experiments, he offers a clue as to how he can be defined: as an artist with a unique observer’s perspective.

Ok Jung Ho Ok Jung Ho is a photography and film artist based on performance. His main concern is about the 'uncomfortable alien substance' felt in the reality and daily life of Korean society. He participated in domestic and overseas residency programsm and he had 7 solo exhibitions, 50 planning and group exhibitions.

GIM Jonggil GIM Jonggil is an art critic and curator. Although he studied Sculpture at the University of Seoul, he often writes and directs plays. He studied Arts Management at the Graduate School of Kyunghee University, and completed a course in Art Theory from the graduate school of Kookmin University. In addition to Many others, GIM curated <100th Year of Kim Bok-jin>(Moran Museum,2001), <Gyeonggi, National Highwaye 1>(Gyeonggi Museum of Art, 2007-8),<New political art in Korea since the 1990s :BAD BOYS HERE and NOW> (Gyeonggi Museum of Art,2014) and was the curatorial director of the 4.3 Art Festival (2015). He was awarded the Curator of the Year Prize(2011), the Lee Dong Seok Prize (2009), and the Kim Bok-jin Art Theory Award (2011). He also wrote the book, Post Minjung Art Shaman/Realism (Samchang, 2013).