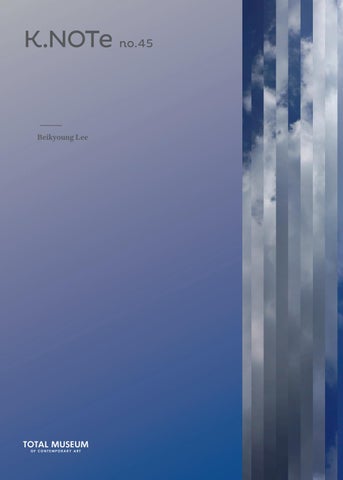 K.NOTe #45 All are derived from curiosity. Jin-Sang Yoo art critic

Which part the body and time take in space? If no time exists, what happens in space? If only the body and time exist? If only the body and space exist? Which influence the time has on our body in space? What happens if people collide in the same space and time? My everyday life is to pose these habitual questions and wander around to look for their answers. My work never presents any solution. It is a mere arrangement of my ideas and there is a suggestion “Why don’t you try to think about it?” My work can be referred to as media art as the media is so usual and everyday tools for me. The media has its own feeling slightly different from conventional art forms such as painting and sculpture. The viewer has the notion of seeing a work of art in front of conventional artworks, whether abstract or representational. What appears in the media is something always existing in everyday life. As their forms remain so universal, we can approach them lightheartedly. Many parts of my work have some interactive elements, but any special knowledge and experience are not required to grasp and appreciate it.

The majority of viewers figure out my work with ease and take part in it. They become active users and feel free within the world of my work. I have no intention to present my idea in a proposition. I just want to gain the momentum to make the viewer ponder and accept my work quite naturally. I want to sak “How’s that?”

Beikyoung Lee Born in 1969, lives and works in Gyeonggi-do & Seoul Since the early 2000s, Beikyoung Lee has been creating interactive media art that allows viewers to experience new synesthetic understandings of the real spaces that surround them. His artwork is based on the establishment of different layers, consisting of real-time video images outside the exhibition venue, the individual audience members, and pre-recorded images. These elements are overlaid in such a way as to condition each of them differently. The works are staged as large projections, which invoke distinctive temporal differences and visual patterns as the viewers watch their own image projected against external landscapes. In these pieces, Lee uses various programs to control images that are input from different sources. He scripts these programs in such a way as to construct relationships between the spatial and temporal layers of the environment, which he then links through the viewers themselves. The layers are continually erased and eclipsed by new layers, allowing the artist to create a kind of â&#x20AC;&#x153;media palimpsestâ&#x20AC;? which continually provides him with blank pages on which to write. The 2003 works Video Chapel and Self-Time are representative examples, as frames from different times are simultaneously projected on the screen, thereby creating patterns out of the positions and movements of the viewers. The viewers witness this process, watching as their own shadows, caught on surveillance cameras, are transformed into fragments or noise on the screen, while also stopping and stuttering the flow of time.