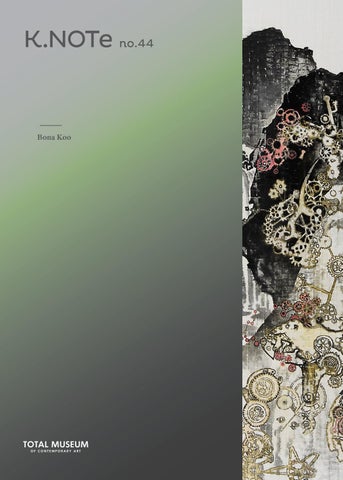 K.NOTe #44 Reading New Expressions of Behaviors with and without Intention, Baptism of Time and Sumuk (Black and White Painting) Kim, Sangâ&#x20AC;?cheol art critic As you know, Sumuk is very old formative method. It becomes a complete system through abundant formative experiences accumulated through its long history. Especially, its history of development including various contents such as original aesthetic sense and appreciation system of Sumuk penetrating the traditional times is the base of Oriental painting tradition. Some people say that Sumuk is an already completed form because of its abundant experiences accumulated through its history. As a matter of fact, it may be a complete format already. It may an obsolete relic of the traditional times which has already passed. However, not a few artists have taken it as the base of their art works even in modern times. It may out of mannerism from the tradition or obsession over tradition. Of course, the status of Sumuk is not as good as before in the heavy current of modern art. However, it is worthwhile to note that Sumuk still exists as a medium of expression and is breathing a new era changing itself with new expressions and shapes. When remembering that tradition has characteristics of organism to secure its life by getting new energies of new era rather than is maintained by protection and heritance, we need to evaluated and notice its spirit and power of Sumuk again. The works of Gu Bonâ&#x20AC;?ah are supported by Sumuk. Dark and withdrawn screens are somewhat solemn and ascetic. Figures combined with various circles and round shapes are strange although they are familiar to some extent. They look like forms made of redundant mechanical images such as cogwheels or 6

Teeth of Tim Ink and color on korean

clockwork. However, they are read as old and falling things rather than mechanical precision or cold order of dense structure. It is dreary just like ruins of a great civilization and reminds us of deep fall of silence. Machines which perform original functions and play roles by performing through certain energies are dissolved and dismantled and left there with their humble flesh shown. It is death and disappearance. The loss of function means the destruction of the purpose. What were meaningful and valuable became symbols as they were destroyed and lost. The shapes losing power and purposes are silent staring the other side of the time. Machines are the products of human civilizations and the climax of intentional behaviors of human beings. What takes them back is time. Humans create them and nature returns them. It is the unchanging law. Time is call that the nature delivers. Although it is slow, it inscribes the call of nature on materials without haste. It confirms the relation between humans and nature by returning the artificial civilization and materials which are the products of the civilization to the other side of oblivion. It is the law of nature expressed in an ironic phrase such as “Nothing is intentional but nothing exists without intention.”(無作爲而無不作爲)

‹Teeth of Time› is the series of proportions of the artist. It is the expression for the nature which returns all kinds of materials and phenomena without resting. The vulgar and sensational word of ‘Tooth’ can be read as an emphasis of properties of time. The particles of machines which lost existence and dignity as well as its original shape and function are desolate and sad. Although they are supposed to disappear to the other side of infinity, they cannot help being sad. It is the fate of machines that can exist by their functions and the pity for the lives of people which can be confirmed by pains. Although people say there is nothing important in going and coming, is there really anything without meaning at all? The artist identifies the existence through the dreadful reality that the tomb of time so to speak the silence of time has. “In this work, I expressed the filling and emptying and the 8

circulation of nature and civilization through the medium of

clockwork. Cogwheel in Chinese characters (胎葉) is made up with

a frame bearing the life just as leaves made to give life to trees........

I found the answer of tooth of time as awe from the reconciliation between nature and civilization. The beauty of awe is that it grows with age. Awe needs patience and it is the victory over time.. It is the opposite of destruction. It can be said as completion.” It is a part of artist’s journal. The spiral wound clockwork is the symbol of life that gives life to things. It moves as if it were alive when it was wound but it arrives at death when it is fully unwound. What is allowed to human beings is the finite life until being unwound completely. Nature gets it back without puss. Therefore, existence and non‐existence and to be and not to be is the different sides of the same thing. The artist calls it ‘awe’ to approve and accommodate it. Although it is slow just like growth ring of elms, it is inscribed in the body to show the trace of time. It may the beginning of another life rather than destruction or disappearance. ‘Completion’ may mean the allowance and acceptance of infinite parts in the nature and finite part in himself by adapting to the baptism of time. And they are read as beautiful. The screen of the artist full of serious meanings and symbols present the structure of speculation just as soaring into the screen through Sumuk. Sumuk of the artist combining the shapes just as ornaments of large temple which is already old, or ruins of the civilization which have already lost the warmth of civilization are very much different from traditional Sumuk. They do not follow the principle methodology such as forms by lines and have strong characteristics as media of forms beyond Sumuk as spiritual values. They emphasize the roles and functions as tools escaping from the aesthetic sense of Sumuk assuming ideologies. Therefore, works of the artist are full of sensual and expressive elements. They often utilize the material characteristics of Sumuk and sometimes use them as media of description. Either case is 9

far from the traditional operations of Sumuk. But the outputs of these behaviors do not look intentional. They can be interpreted as new expressions acquired in the time and the place of modernity which Sumuk meets during the time of changes. In case of this artist, the formative purpose that the artist wants to express precedes the virtues of doctrine of Sumuk, and the faithful reactions to these requests are shown in the works. When we emphasize the spirituality of Sumuk, it does not mean certain spirituality should be reflected on Sumuk itself. It is natural that it becomes to have spirituality when it is revealed with the combination with the thought of the operator. When Sumuk is the formative methodology to reflect the nature with the uniqueness of properties such as including all things in the world of thinking escaping from the objective situations of phenomena and penetrating and infiltrating, Sumuk of the artist is compatible with the fundamental spirit of Sumuk although the expressions are little different. When we remember that Sumuk is a formative method that acts and reacts sensitively in the relation between human and nature, the selection of the medium and the will of artist becomes in perfect balance. It can be said as a new expression of Sumuk created by absorbing new power and energy such as forms in the time and the place of modernity. Sumuk seems to deliver the story of the old times maintaining its own life through these processes.

The bird winding the spring 50x30cm nk and