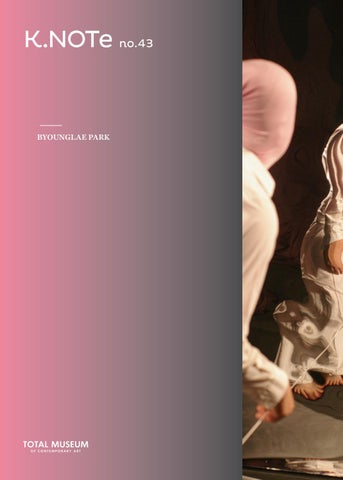 these pages, but it becomes too easily presumptuous to generalize one’s own personal admissions. For now, at least, it will suffice to say this: Byounglae Park’s video work is akin to the gathering of scattered fragments from the desert of youth by a generation that never had the store- house of private recollection one might see as essential to historically contextualizing that youth, and (de) constructing it into impersonal memory. While some of it has been shown at film festivals, Byounglae Park’s video work was developed chiefly for exhibitions and, as is so often the case with works shown in art exhibitions today, has been reviewed in ways that tease out its psychological, social, political, and historical meaning or significance. Even the “games” or “play”  that may be seen as the most prominent thematic obsession running through his work have been readily discussed in connection with psychological, social, political, and historical motives. It was an ominous sign when Hwapo 2014, a work of  “play” that seemed almost completely unconnected to these motives, was virtually ignored (even by the art community, let alone the cinematic one), despite being an important work encompassing aspects of his whole oeuvre to date. We cannot simply take Park at his word when he claims that he wanted to “tell the story” of those generations without memory. For while there is play in his video work, there is no “story” in the conventional sense. Or rather, play is story for Park. His use of the word “story” in the interview was merely a kind of habitual figure of speech. We should therefore read his “tell a story” instead as “wanted to play a game.” Indeed, Byounglae Park’s junkman play at (de)construction memory, with his video works from Half-Moon Game(2007)to the recent Jutlandia 2015, arguably have no other purpose than to explore the conditions for this kind of play. Half-Moon Game begins with an explanatory subtitle about a game that was popular among South Korean children in the early 1980s. (The game referred to in this work as bandal, or “half10

moon,” is a slightly modified form of the games known as “riding the plow” or “the 38th Parallel game.”) It then segues into a video excerpt from General Ttoli 1978, an anti-Communist animated feature that depicts North Korean troops as wolves and foxes and Kim Il-sung as a pig. This comes across clearly as one of the scattered fragments from the desert of youth for a generation that absorbed a sense of the political situation and the antagonisms between South and North indirectly through various media. But Half-Moon Game does not move in one of the directions one might expect -- using these fragments to explore the unconscious of the artist’s generation (critical remembrance), soothingly turning them into objects of false memory (melancholy), or drawing out of them some introspection on the present (allegory). Before one takes a step in those directions, it is crucial to have one’s balance. A figure, played by the artist himself, loiters around a set with various white, tree-shaped structures against a black backdrop. Within this empty childhood space without memory,  he discovers a hole in one of the structures and sticks his finger in it (the familiar childhood imagination of holes in trees as leading into another world). Then a figure turning a steering wheel in a white cubic frame inside of another empty space appears to lose his balance and lurch violently. (The idea of using a steering wheel to steer a boat through the sky or pilot a spaceship may have been based in the cartoons or fairy tales encountered by people who spent their childhoods in the 1970s and 1980s.) Tampering with something that connects one space to another -- and attempting to restore equilibrium from the upheavals generated by that tampering -- forms a structural principle to the rhythms of play in Half-Moon Game and Elastic Cord Playing(2008). In the case of Elastic Cord Playing,  it is another figure loitering around an empty, black space who sets off a repetitious rubber band game by using his foot to tweak a rubber band attached to a mirror. His mirror image begins moving about independent of him, and his repetitive actions in the game as he tries to adjust the line (rubber 11

band) connecting the two spaces become something akin to variations on a musical riff. In contrast, the play never begins in Jutlandia, where a line of multicolored toy blocks appear on the split screen, but are not tampered with in any way and retain their balance throughout. Instead, we simply witness landscapes like a ski lift passing with no one on board, an empty tennis court, a sea, a desert, and a field. While the tampering does have the effect of suddenly calling together scattered fragments from the wasteland of youth, those fragments are no longer metonyms for anything. The mask covering the face of the “Red pig” is no longer a device for recalling the absurdities of anti-Communist education in the ’70s and ’80s. The mask enters Byounglae Park’s space as simply a mask, and nothing else. The same is true for the steering wheel, the mirror, and the half-moon and rubber band games. What remains is the test as to whether a game can still be made of these fragments. If the mask in particular seems to occupy some privileged position among the items, it is because it has been changed, like the helmet worn by the protagonist Zebo (played by Park himself) in Zeboriskie Point(2011), into surface as surface, where even the face recalls nothing at all. Half-Moon Game and Elastic Cord Playing are attempts to reduce everything in the game -- tools, spaces, and actors -- to a state where no metonymy can function, and then to detect the rhythm of play itself. It goes without saying that guessing the game’s directions in this way are an essential process for a generation without memory to fully affirm in their hearts that their childhood truly was transparently impoverished, without disappointment or passion. In that sense, Byounglae Park’s political science could be said to lie not in any implications or symbols in his work, but in the cheery affirmation of the stripped-down games carried out repeatedly through his work. Byounglae Park does not rush. And as viewers, we should not commit the folly of leaping too hastily from play to history. It was with Zeboriskie Point that actual landscapes began replacing empty black spaces in his work. Detailed information about places 12

in the Gunsan area that serves as a backdrop for the work may be useful in contextualizing the work historically within the exhibition environment, but Zeboriskie Point could pose some obstacles in detecting the taut interplay maintained between play and history. The work contains desolate landscapes, derelict buildings, and the items seen, touched, and gathered up by Zebo,  but we merely see those things, without any information. Zebo recalls the children of the past who would carry around pieces of junk as if they were weapons or tools and hang around desolate spaces (which may well have had some historical meaning of their own),  turning them into “secret hideouts.” Zebo’s actions also echo the performance of improvisational musician Choi Jun-yong from Hwapo, who walks around the Hwapo mud flats on Suncheon Bay collection various items to produce sound (noise) and gathering them in one place. In his own way, Zebo is doing something similar to what Choi does when he frees objects from metonymy and reveals the materiality of the “impoverished sounds” they produce. Connected to the equipment on Zebo’s back is a tube similar to a probe or a mister, suggesting his acts can be read not just as investigation but also a “disinfection.” Indeed, Zebo’s new journey only begins once his base camp (wooden stakes arranged in a circle) has been carefully sterilized by liquid sprayed from the tube. Melancholy is the emotion people are most prone to succumb to when awareness of the past and its value comes only after it has been reduced to ruins. At times, the emotion has been equated to historical consciousness. Other times, what follows it is the collector’s passion. But I mentioned before that the impoverished generation Park addresses has no memory storehouse of its own.  (Their spaces are ones when no settlement is possible, like dark and empty temporary studios, deserts, wastelands, and seas.) Zebo does not collect anything; he is one who pokes, examines, disinfects, and moves on. Choi Jun-yong in Hwapo does not collect either. Although he does assemble bits of junk, they are gathered at the center of the mud flats to be swept away when the tide comes in. 14

Choi is one who listens to the sounds of objects and moves on. His actions -- in the middle of nowhere, performing actions that belong unambiguously to the “now/here” before moving on -- overlap with the kind of figures that have appeared in variations in Byounglae Park’s video work. (Among the experimental improvisational musical performances Choi Joon-yong has “composed,” it may be interesting to combine Park’s video work to Bounce. Fall 2011, in which hundreds of ping pong ball are dropped in a regular cycle.) The paradox of video work is that it takes a time-limited performance and makes it infinitely repeatable. It is this tension that cuts across Park’s video works, the archiving of presenttense games to (de)construct memories of a generation without memory. Zeboriskie Point reaches the height of its tension when Zebo, having finished preparations for his new journey, suddenly begins playing jachigi (a stick-tossing game) in the middle of his base camp. While conveying a refreshing sense to the viewer, it also aspires to an opening-up that would invalidate the circle of repetition (given shape by the base camp). Is it possible for play and a historical sense to come together -- not through looking back on the naive play of the past, or retrospectively examining the backgrounds surrounding those games, but by performing games purely as games? With Jutlandia, Byounglae Park addressed historical facts in an unusually direct way for his work. (Song lyrics by Danish musician tell of the Jutlandia, a Danish hospital ship dispatched during the Korean War.) Landscapes recorded by Park over time are positioned throughout Jutlania, but no game is triggered from these fragments. There is merely the sense that a moment of play will come, conveyed through the periodic appearance of rotating blocks in a row. The person who will be playing has not yet arrived, however. Perhaps eventually we will see the curious spectacle of Zebo wearing neither mask nor helmet, the vagabond of that impoverished generation confronting history bare-faced, as he plays his game in a way truly befitting a game.

BYOUNGLAE PARK Byounglae Park is visual artist focusing on space, memory, play and unconsciousness surrounding individuals. He explores the contemporary situation in which individuals live with heterogenous images and privately relate themselves with them, and reconstructs them into video works of narrative form with articulated and dislocated layers of time and space. His major works include <Elastic cord playing>(2008), <Zeboriskie Point>(2011), <Hwapo>(2014), <Jutlandia>(2015). His works have been screened in several exhibitions and film festivals, domestic and abroad. His current artistic interests range from his own video practice to various educational activities.

Yoo Un-seong Yoo Un-seong graduated in physical science education from Seoul National University and studies film history and theory in the Korean National University of Arts (K-Arts) video theory department (specialist degree). In 2001, he was awarded top honors in Cine 21â&#x20AC;&#x2122;s film theory awards. He worked as a programmer for the Jeonju International Film Festival from 2004 to 2012 and as head of the planning department for the Moonji Cultural Institute Saai between 2012 and 2014. In 2016, he and Mediabusâ&#x20AC;&#x2122;s Im Gyeong-yong launched the quarterly video criticism journal Oculo, where he serves as co-publisher. Yoo lectures on film at K-Arts, Yonsei University, and Dankook University.