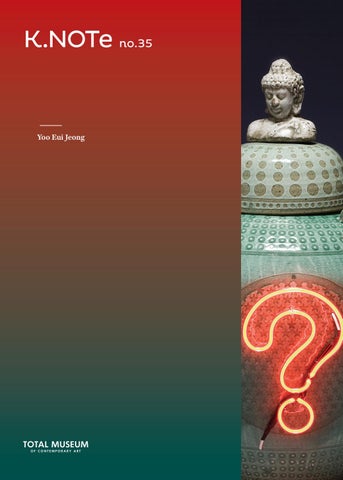 K.NOTe #35 Documentary Floating in Time Lee Sunyoung Art Critic Yoo Euijeongâ&#x20AC;&#x2122;s Records in 2014 (From Ranking No.1 to No.100) is on presentation in a style customary of history museums, not art museums. Three ceramic works are placed under lighting in a gloomy space and stand out like an inviolable statue of the Holy Trinity or other sacred images. As a child, Yoo lived in the vicinity of Gyeongbokgung where the National Museum of Korea was located so he was able to visit often. After majoring in ceramics, he dreamt that his works would have as much splendor as the museum pieces he used to see. Due to his unique experience of having the museum as his playground, he seems to have a preference for temporality and historicity. In his works there is an acrobatics of temporality in which the remote past has a dramatic encounter with the remote future. Temporality is one of the principal elements testing a truth. The constituents of his work, however, are far away from something that has endured the test of temporality or any crystal of purity. Any refinement and gentleness we often expect to find in ceramics is not sensed in his works due to a mixture of diverse styles and seemingly contradictory signifiers. Numerous materials are dexterously mixed in the form of ceramics and the patterns on the ground are extremely diverse. As the work title indicates, the patterns display the logos of global brands ranking from No.1 to No.100. As some products use logos for their designs, the patterns are a gathering of well-known brands. Logos including Google, Apple, Coca-Cola, and Facebook are found in this work and are arranged in accordance with brand power. As these arrangements are based on a survey conducted by Google, an information company, the majority of the brands are information4

related firms. Yooâ&#x20AC;&#x2122;s work reflects the age in which we absorb

information as if drinking water or breathing in air. His work, however, aims for modification. He will not worship the worshiped once again. Using a variety of materials, particularly those with glittering qualities, his works are devices to reflect ourselves. What’s more, the artist goes further rather than complaining about current situations. If fetishism refers to temptation, a means of temptation is required to shed it. We can change nothing with just a cynical argument. The company logos which were chosen by consumers as the most beloved in 2014 are presented in Yoo’s works and shine brilliantly like artifacts in a museum, going beyond their original function and content. They are there not to be used or exchanged but to be worshiped, and yet they have no form suitable for worship. Kitsch art is typically characterized by a style of piecing popular things together without any consideration of moderation and harmony. Products made of choice materials are subjects of revisiting, not worshiping. His works are comprised of diverse symbols and are subjects of consistent interpretations. They could be regarded as a criticism on the culture of the times but we do not know what use these works will have in the future. The signifiers detached from their referents or meanings are lighthearted, however the artist manages to lend a firm precept-like reality to his images. Signifiers are applied to the works during the process of forming the ceramics. For instance, a complete modification created by applying high degrees of heat gives the work a sense of weight. The salient feature of Yoo’s work is a coincidence born from the magical process of the signifiers becoming reality during the production process of his ceramics. He holds the “cultural aspects of our age” in ceramics, an antique art form. His brand logos can be said to be floating over the surface rather than being contained in his ceramics. As the signifiers detached from the signified form another reality, shaping a network of themselves, his brand logos archaically represent a reality where he superficially turns to the essential. 6

Although there are many that can be purchased at a reasonable price, ceramics are still thought of as something precious due to their frailty and are the signifiers symbolic of Oriental identity. This is perhaps relevant to the fact that ceramics have durability and were invaluable products imported from foreign countries via rugged trade routes. As ceramics are able to survive the test of time, they can be an indicator of times and regions, forming a lineal genealogy in museums and art history. That being said, inevitability is a result of many coincidences combining together. There is discontinuity in this lineal genealogy as in a fault. If something is found in this hidden fault, it is elementally rearranged. The artist would not conceal numerous temporal, spatial gaps innate in the unified style of ceramics. Any origin and purpose, fact and truth are variables that can be reconstituted just like the top 100 brands. His subject matter can change any time in accordance with political, economic, and cultural situations. Yoo’s work is like a time capsule reflecting a cultural topography of the here and now. As he mentioned, his work can be called the “relic of the future.” To the artist who tries to shed our prejudice that ceramics are all from the past, his relic of the future is the mutant embracing heterogeneity in its homogeneous body. Newness derives from a modification to overcome some sort of limitation. It is not a creation of something from nothing. The reasoning behind the movement of the first organisms that came from the sea, the first animals that stepped down onto the land from the trees where their security was ensured, and the settlers who made a decision to move to the new continent from the old where their support for living was well equipped was probably not ambiguous curiosity or an adventurous spirit but a call to survive. It is regrettable how the futile attribute of “experiment” was emphasized when the concept of “avant-garde,” originally a military term, was used in art. Yoo’s ceramic works, considered a hallmark of purity and spirituality, bears surfaces that are covered with 7

trademarks that hark back to a period when people struggled for survival. They lead viewers to a complex reality, not to a comfortable forum for contemplation. If his works are lucky enough to be considered relics in the future, they could offer some clues about the world in 2014. As in many science fiction films, ceramic pieces could one day be used to distinguish different time periods and regions in a far-away future after some catastrophe has occurred. There are several boundaries in Yoo’s cultural criticism commented by ceramics. He blends different aspects of cultures, genres, techniques, and materials through ceramics. To the artist, ceramics is an ample space to hold and mix many elements plausibly. How can it be possible with ceramics, a method with high physical resistance in an age when weightless codes using two binary digits, 0 and 1 are conveyed anywhere beyond any spatial limitation? If we believe in the myth that God formed Adam from clay, we can consider God a potter. As such, a paradox that the more materialized an age is perhaps the stronger an invisible strength toward materiality can be applied. The artist is one who lends concreteness to the invisible. The lighter a signifier is, the easier it can be blended. Our age is not characterized only by hybridity, but it is obviously accelerated by the information revolution. The typically

overstated letters, 液體時代 (Liquid Time) nicely embedded on the surface of his ceramics condenses the hallmark of modern times

that has constantly flowed. Likewise, his ceramics becomes a vessel to contain ceaselessly flowing liquefied signifiers for a moment. There is a complex network among global logos that indicate more than a ranking. This network has become more flexible, moving beyond a solid structure or system. A fetish successfully works in this system. Pieces in a museum are turned into treasure by the power of the classification system. The same can be said of any discovery of a new species in biology. The most stable triangular structure Yoo’s work relies on stands for systemization or something 8

at its apex. Contemporary art, considered open to all, becomes structuralized by a systematic power of the art world. In his previous pieces he addressed this system and the practical structure in which renowned works or commodities are produced in the dimension of meta-criticism. In his recent works however, he deals with a fetish structure in a more integrated form. As a fetish is a concept of reverence where something is regarded as being more than what it is, there are many more teeming elements than whatâ&#x20AC;&#x2122;s visible in Yooâ&#x20AC;&#x2122;s ceramic works. They are not only brand logos but also gods who have been pronounced dead long ago with humans considered dead alongside them. As Yooâ&#x20AC;&#x2122;s works suggest pre-historic scenes after god and man disappear, they look more like specters. Do the scenes arranged on the top or very middle of his ceramics exemplify some metaphysical dimension transcending human regulations? A man who looks down on all is a god and his self-portrait simultaneously. Found in his work in which a skeleton, a face, a Western head and his own face intersect are lots of boundaries between life and death, east and west, past and present, good and evil. The boundaries, however, are just for transcendence. In his previous pieces he actively experimented with any combination of mediums, i.e. a combination of ceramics with mechanical devices. Also in this exhibition bronze, iron, and mirror are integrated with ceramics. Their reflective surface reflects age and subject. Letters engraved on the body of ceramics are associated with the ornamental tradition of the East, offering another clue to interpret his work. Another window in the window of an artwork provides a rich variety of spectacles and things to read in connection with the multiple layers created in a process of firing more than common ceramics.

Yoo Eui Jeong Yoo Eui Jeong is highly educated and is currently doing a PhD at the Department of Ceramics at Hongik University(Seoul, Korea). He has participated in numerous exhibitions including at the Victoria & Albert Museum, London UK, the Yingge Ceramics Museum, Taiwan; the 2013 Gyeonggi International Ceramic Biennale and the 2015 Cheongju International Craft Biennale, both in Korea; and he has participated in leading Artist Residency around the world.

Lee Sunyoung Lee Seon-yeong (b. 1965) began her criticism career in 1994, when she was selected in the art criticism category of a spring literary contest held by the Chosun Ilbo newspaper. She has served on the editing staff for Art and Discourse (1996â&#x20AC;&#x201C;2006) and as chief editor for the Korean Journal of Art Criticism. Honors received include the 1st Kim Bok-jin Art Award for theory (2006), the Korean Association of Art Critics Prize for theory (2009), and an AICA Prize for Young Critics (2014).