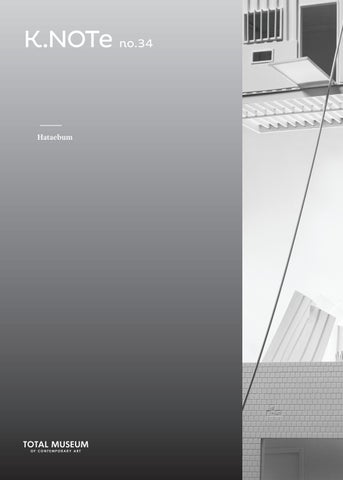 K.NOTe #34 Alienation in a Decolorized Reality Ahn So-yeon Art Critic The photograph on display alludes to some unfortunate incident, with its buildings reduced to skeletons, its tilted telephone poles, an overpass that has lost its sense of direction, and the large pieces of debris that cover the road. The grim landscape inside the white, decolorized image excludes the reality, heightening the resonance of some ineffable absence. The incident recorded in these colorless ruins is the stark reality in a Japan left devastated by a megaearthquake and tsunami in 2011; the artist Ha Tae-bum borrowed photographs from press reports at the time to great his unique white photographic work Tsunami in Japan (2012). The viewer’s gaze is frequently blocked by the fact that it becomes impossible to sympathize with the situation in the photograph once all color has been subtracted from a grim landscape of a dark reality. This has always been the case with Ha’s photographs. The worlds of spectacle in the images push everyone’s gaze off to the distance, leaving no room to enter the situation. With his white photographs, any traces that might serve as evidence of what happened, or the real-world narrative they create, have vanished with the color. As the viewers approach the incident documented in the photograph, only to find they can no longer see, they are focused to turn their gaze back to their own role as apathetic spectators. The Ethics of Seeing Susan Sontag said that the most important thing in photography, which ushered in an expansion in vision, is the “ethics of seeing.” Here, she was emphasizing an ethical stance toward seeing in terms of the photographic gaze as a series of acts of directly understanding, recording, and participating in the world. At the 4

same time, it was also an acknowledgment of its ethical limits.

Like the photograph’s alternating light and dark as described in Sontag’s On Photography, Ha Tae-bum’s photographs lay bare the necessary contractions of the seeing act, while trenchantly evoking that structure of conflict within the work. These explorations of the issue of “seeing” in Ha’s photography can be traced back to his solo exhibition Ich sehe was, was du nicht siehst, held in Berlin in 2008. As the title (meaning “I see what you don’t see”) suggests, each of the nameless landscape photographs reflects the artist’s gaze and the camera’s focus on the other sight of the everyday, occupying a position no one else can see. For example, he focuses his camera on everyday objects from up close – makeshift benches, signboards, trash cans, drainpipes, and guardrails – and presents them side by side with the photograph’s deeply expanded space. To capture one very ordinary landscape, he has had to resort to lying flat on his stomach with his camera so that no one can sense the absurdity of the reality. He fashions what are actually unrealistically tiny model objects – benches, signboards, trash cans, drainpipes, and guardrails – and places them on the floor against the backdrop of an empty street to be photographed from very close up. The two divided realities experienced by the artist on the ground – the discordant parallel between close-range and distant view – are clearly different from what we experience in the finished photograph. Ha Tae-bum has used the classical techniques of photography, including camera angles, lighting, and arrangement of objects, to replicate magical real-world images that seem both to resemble the reality and not to. His visual trickery is not flawless. As with the early photographic series described above, even the sophisticated images that stand in for reality in his pictures begin revealing uncertainties when we leave behind the natural relationship between close-up objects and distant landscapes and start focusing on the concrete relations between objects. Through roadside weeds as tall as trees, pebbles the size of rocks, drainpipes the size of a leaf stem, the photographs’ perspective in showing the reality comes across as suddenly unrealistic. It is a legacy passed down by the 6

“Pictures” generation in the 1970s: by overtly revealing the illusion of the processed reality in the image, it alienates the viewer’s gaze toward an unfamiliar reality beyond the seeming perfection of the surface. But if we take a step back from the camera angle that controls us with this visual alienation, we come to see the divide from reality that was left out of the photograph. In that sense, the white photography work that Ha Tae-bum began in 2008 has been aimed at a more complex form of visual reversal. Since his White solo exhibition in 2010, he has turned his attention fully to the ambivalence of the photographic image as its recreates real-world events. His intentions over the years become clear with the words he has used as solo exhibition titles: “ambivalence,” “white,” “veil,” “umgebung” (“environment” in German). For Ha, reflection on seeing evokes both human visual desire and complacency. Crisis of a Blind World Decolorized to the bloodlessness of a corpse, the world seems like a lie. Despite their being evidence of reality in the form of a photograph print, the pale spaces Ha Tae-bum presents create a greater sense of confusion than if they were total darkness. In the case of his white1~5 series (2009), the white effect emanated by familiar, everyday spaces forecloses any practical context or narrative imagination. Images of a reality that is static to the point of enervation stress that there is no need for any more visual functioning. It is a world of blind people who cannot be trusted. In this way, Ha Tae-bum focused on a false reality – controlled, edited – and on the complacent perspective of the masses who desire and consume it. He begins his working process by gathering up press photographs of incidents and accidents from around the world. He seeks out pictures of much-discussed events throughout the world: wars, terrorism, natural and manmade disasters, diseases, and poverty. Because the unfortunate situations in the photographs recreate an extreme reality faced by others that we cannot share, it elicits a greater sense of real sympathy than other reality. The human desire to consume ever more powerful images, however, is 7

such that once images have reached their saturation point, even that initial sympathy fades and loses what power it had. Ha’s response is to import shocking press photographs that show unrealistic events happening in reality, and then to clear away whatever lingering visual powers they hold. After finding a tiny photograph online, he eliminates people, color, and any other narrative traces or clues, before shaping the scene left behind into a three-dimensional model. He then uses pliable white plastic sheets to restore the model into something like a movie set, which he magnifies once again in his photographs. The final result of this process is a single white photograph that has undergone several transformations. In this process of erasing, clipping, and altering a two-dimensional photograph into a three-dimensional model and then reverting it to two dimensions, some distortions and omissions inevitably occur. As we all know, the strict controlling of the situation applies as well in photography when a three-dimensional reality is compressed and recorded in a two-dimensional frame. In this way, the photographic image as fragment of a reality segmented by the perspective of someone seeking to communicate the truth is shown through Ha’s meticulously controlled working process to be an all the more clearly fictional truth. The white photographs in Incheon Redevelopment Zone (2008), A Radar Base Near the Capital in Georgia (2008), New York 911 (2009), Düsseldorf Murder (2010), Haitian Earthquake (2010), Terrorist attack International University Islamabad, Pakistan (2010), and Terrorist Bombing in Baqubah, Iraq (2012) are like the afterimages of images consumed in reality – the white afterimages of blind people transfixed by powerful light. To the viewers facing disappointment at the grim afterimages deeply imbued in the photographic surface, Ha poses a question about the true meaning that may exist behind the uncertain illusion. As some may say, those illusions may possess a decisive power in helping us understand the reality. Ironically, the truth of the event may disappear without a trace, leaving behind in reality only an incomplete photographic record of the scene. Just as the white models painstakingly crafted by the artist to match the 8

photographs are futilely discarded once recorded in pictures, we may be residing in the blind world created by the images’ illusions, having become inured to it. Any clear divide between unrealistic incidents that really happened, unreal images standing in for reality, and fake models replicating the reality has long been erased. Ha Tae-bum found a shocking video online, showing a shooting photographed in an actual country in conflict. The short video, which appeared to have been taken by a fighter plane, included a provocative scene of communications relaying an operation and a barrage of indiscriminate gunfire on a civilian village. At first glance, it seemed like a familiar war game, making it difficult to even discern whether it was real. Ha used this image as the basis for his Playing war games 1-2 series (2012), in which he used sheets of white copier paper to replicate the actual video images; as with the white photographs, all figures and colors were removed. Plastic BB Guns fired from a toy gun instantly level a model village produced on a sheet of white paper. His video, lasting just over five minutes, is a recreation not of the real terror of war, but of the appalling images of reality consumed through the video medium as virtual images. In this way, we believe we are experiencing and empathizing with the reality of others “over there” through photographs “here.” But while photographs are said to record a reality that is prone to evanescence and to show us worlds we could not see from where we are, any experience through a photograph is unrealistic unless we are experiencing the world of the original. Ha’s exploration of the fictiveness of the photographic image and the violence of the consuming gaze continued into his recent solo exhibition White-Perspective (2014). For this, he turned his attention to photographs taken by global poverty relief groups to share the grim reality of communities struggling with impoverishment and disease. Like war and disaster, poverty and disease all too easily become unrealistic images of a world outside our own reality to people used to sensational imagery. For this reason, Ha adopted a different approach from his past 10

work, selecting photographs from among the ones distributed by relief groups and separating the figures in the images from their backgrounds to recreate them as white sculptures. The finished sculptures convey something close to the sublimity of absolute aesthetics, separated from the reality like classical human figures carved out of white marble. Photographic images, as Sontag noted, turn the reality into abstract form, so that we often experience an unrealistic sense that differs from the reality. As he contemplates the complex relationship between reality and images of reality, Ha Ta-bum restores responsibility for the vision of the alienated agent back to reality.

Ha Tae-bum Ha Tae-bum graduated with undergraduate and graduate degrees in sculpture from Chung-Ang University before completing an MFA program in sculpture at the Stuttgart State Academy of Art and Design. Ha’s approach originated in his realization that the shocking images conveyed in the media represented another everyday that he was experiencing indirectly, and his astonishment at the apathy, insensitivity, and absence of any compassion in response. In 2008, he first presented his work rendering all objects in white with his White series – an attempt at decolorization of images and objectification of meaning. He has held numerous solo exhibitions in South Korea and overseas, including White-Perspective (SOMA Drawing Center, Seoul, 2014), Dialogue Method – Collaboration Project (Seoul Art Space Hongeun Gallery H, Seoul, 2013), Nimmst Du richtigwahr? (Dahlem Art and Culture Association, Berlin, 2009), and Unfinished Narrative (Korean Cultural Centre, India, 2009). He was one of four nominees for the National Museum of Modern and Contemporary Art, “Korea artist prize 2015” awards, and his works are included in the collections of the Seoul Museum of Art, the National Museum of Modern and Contemporary Art, and Germany’s LBBW Bank.