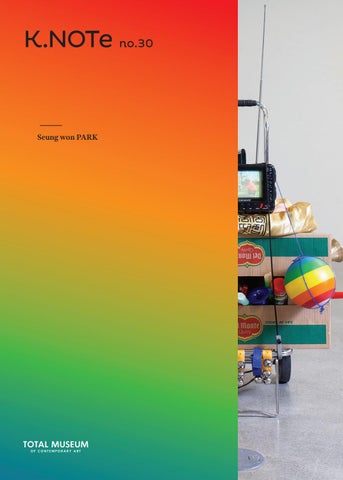 K.NOTe #30 Becoming-Animal: Allurement & Attempt towards an Involution Introduction of PARK, Seung won and His Exhibition, ‹ 000 › BAIK, Yong-Seong Philosopher, Art Critic Residing on Zabraskie Point Anyone would either be liberated temporarily or suffer from homesickness in a strange place. It may be a place with no familiarity, and in a sense a place inflated with inhumane scenes. One may say that it is similar to vague unfamiliarity suggested by Franz Kafka in «Castle», or to 'uncanny' put forth by Sigmund Freud. But when confronting with his/her life being vagabond, an artist does not always dreaming of going back home. It seems that Park, Seung won's works start from such an experience or impression. Especially, drifting through life in a modern city can create a critical moment instantly. The situation of being vagabond may attack us in between workplace and house, school and house, studio and house, and even while travelling. Here, I may refer this absence of dwelling as ‹Sense of Non-Uniformity›. Life in city, which routinises the status of unfamiliarity with which one doesn't want to go home, doesn't want to stay in workplace or studio, and doesn't want to meet anyone. But unlike the status of exile, imprisonment, confinement and forced refugee, the modern city smoothly impose the status of vagabond to individuals. The reason must be differ: sudden separation, layoff, undefined feeling, never-ending restlessness that caving in on life, and many more. One can instantly remind of the salt desert in ‹Zabriskie Point›, the film of Michelangelo Antonioni, and also the actual place. Marking a new orbit of secession and creating a Zero Point which 4

shapes and forms, - in the same way, we tend to see just a void space when we see a desert - so that we miss the essence. In other words, Being an essence happens before we perceive a thing as fixed. It is a sort of Heraclitoric minor's way of thinking, and it also is a Taoist way of thinking. It looks that there are no buildings or landscape in a desert, but the desert already has endless changes of its own power. Wind and win, sand and sand are encounter with each other and detonate their own power ceaselessly. As much as the desert changes, Becoming-Animal is a world of instinctive grouping, movement of a herd, and motions which have been there even before existence of language, divided and categorised by codes and signs. It is the moment when ‹Sense of Non-Uniformity› is aggressively expressed. It is based on ability to sympathise. There exists glaring differences and movement of continuity where they are constantly interpenetrating. There is no place for fixed self, and furthermore, there is no place for chimpanzee which can be referred to as similar by individualised and accordingly fixed ‘similarity’. Like the scene in ‹Zabraskie Point› where naked bodies eager to mingle with each other in the desert, attempts of quantum entanglement consist of the scenes of ‹siaraM-part1›. We can smile or nod as we see the piece because we already have the ability and dimension of entanglement, sympathy and inter-penetration. Accordingly, success in becoming a chimpanzee via imitation is merely a result or effect of something, not the true cause of it. On the contrary, as found in the artist's note, the cause is longing for communication itself. Park asks himself whether it is possible to communicate with Lily or with other animals. “Is it, by any chance, originated from profound desire for communication, in other word, longing for communication via exchange of a certain emotion, preceding language, that I, or all human beings have? And can such an exchange of emotion be the primal communication which I thought I had with Lily? But can I say that Lily also felt what I felt?” 6

Perhaps, his question may last a bit longer, and his experiment may be continued. But what we must see is the motion-language that he creates. That exists, as aforesaid, before codified languagesign, and expresses several traits of body-fluxes. It surely is bodily language of imitation at a glance. But What kind of possibility of expression does the non-verbal motions that Lily and Park do, the motions of animal imply? We may refer to several studies of Agamben on gesture as a language. "This non-verbal state of language is shown in 3 dimensions. 1) Riddle: the more you try to say, the harder it gets to understand... 2) Secret: What is untold in the riddle, and such a secret which is nothing other than human existence itself as long as they live in the truth of language. 3) Mystery: Mystery as an execution of such a secret. Finally, a poet is expressed as an existence, remaining speechless in language, and as an existence, dying for the truth of sign. Surely, for that reason, motions are motion of being, always lost within language. Such an analysis can be apply to arts in general. But the nonverbal state is always “lost in language”, but it is the dynamic entry to the basis itself, which supports the language, and from which language-sign often capture as its own order. In ‹Well roared Lion!›, the superficial failure of Becoming-Lion becomes secondary due to his efforts of dynamic entry. Of course, it is quite comic. The fun that it relays - if it is not just laughter at his meaningless attempts - is a sort of tingling generated from this being a motion based on it. Accordingly, success or failure of communication depends not only on superficial success, but solely on his ability to change his body, and his ability to express. Ability to become another body, that is what Deleuze says as involution. Involution is neither retrogression or progression. It is generation (becoming) of pre-individual field which is converging within (in) or spreading out (volution). It is severely dangerous for someone, but it still is a fascinating and tempting act. But Becoming-Animal is, as in the case of ‹siaraM-part2›, also include possibility of degrading itself at the level of ‘imitation’ 8

permanently. Although Becoming-Animal is not becoming familiar animals, it delivers a disparate sensation, but there is a possibility that people just try to find familiarity from the performance and enjoy it as one of fun events. If so, is ‹siaraMpart2› just an event imitating familiar monkey? It raises question of differentiating a space of commercial event and a space of arts. And as it is not a closed question, but an open question, it differs according to participants impression and reflection, in other words, according to situation, however, as street has been codified as it is, the performance executed in an attempt to change the codes can be a serious and at the same time, pleasant experiment. Discipline of Body and Impossible Community Discipline of body, as much as training of animal, originates from nomads. It becomes desert, sorcerers, crazy scientist, accordingly artists. As Walter Benjamin points out, ‘discipline’ of a craftsman and functional 'training' of a mechanic are confronting. Furthermore, discipline sometimes goes beyond the craftsman. Accordingly, it is like discipline of warrior to become-weapon, and it also is like discipline of becoming-flame of meditation. Such a body-making process impose substantial stimulation to the nerve of materiality of body or routinised repetition (habit), so that it actually makes a body which can be anything potentially. But I presume that the discipline of Park is aiming at sympathy with the chimpanzee and the lion with which he endeavored to communicate. That is why I may say that the body of chimpanzee and lion is not a mere routinised, boring body confined in a cage, but is the body with potentials which innately included in it: Roaring body, jumping body, clawing body, and accordingly body of rain forest... It is the energy of body itself. I may also say that it is not fascination of animals as forms of herd, in other words, familiar, cute and known motion of domestic animals, but is the potential itself omitted from the disciplined body. When Joseph Beuys tried to suggest such impossible bodies and community of animals as a sorcerer, Park seems to capture the 9

dynamism of the 'motion' itself. That's right. All things exist in the universe are in one community. Here a certain energy or a certain reason is showing its possibility and inter-penetrating while constantly changing in variation, As much as the community of light, the community of wave and the community of life, such fluxes are participating in the process. Accordingly, a body is fold temporarily collected from all the fluxes of light, wave and life. But fold does not manifest unless it is open or moving. That's why his efforts to create irregular rhythms, and notes with his body are not surprising at all, because, body, desire as body, spirit as body and energy as body are stubbornly maintain their path as long as they can go. Accordingly, the scenes of audiorising attempts, BecomingSound, which goes beyond visualisation of motion, create their own time and space like an irreversible ‘festival’. His artistic language is rough. And as it is rough, it is not easy to define his artistic language. But he will continue to do what he has done. And as long as the things, visualised in the time and space through which his bodies run, exist, we may be able to call his works as ‘art in action’. I believe that it matches with the essential implication of action painting put forth by Rosenberg, because by the moment when art works resign to be long-lasting, exchangeable objects as they are fixed and solid, they desire to be fluxes as they are. Perhaps, it is the way of creative answer which arts can suggest to the non-materialising society of commodity in the late capitalism.

Seung won PARK Seungwon Park graduated Hochschule fĂźr bidene KĂźnste Hamburg in 2012 and currently lives and works in Seoul. He focuses on the unstable individual who lives under the name of reason and rationality. His work consists of a combination of installations, performances, and images using commonly found objects. He makes a space and instalations where the absurd section of society is shaped. He reveals the errors in system operation in his work, but it contains movement of the body and humor.