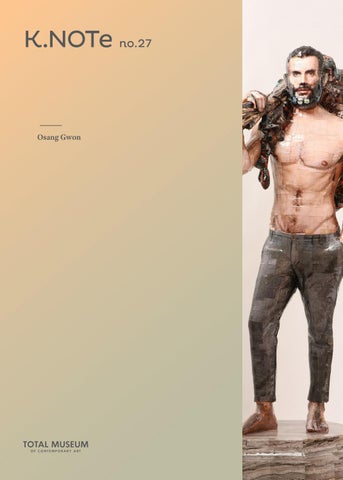 K.NOTe #27 Spatial – Temporal Sculpture --Some Observations and Thoughts about Osang Gwon’s Works Wang Weiwei Curator, Museum of Contemporary Art Shanghai Many people, like me, probably heard about the Korean artist Osang Gwon from his series of photograph-sculptures “Deodorant Type”. In regards to the series, the artist once commented about himself as an artist who “attempts to explore a kind of light-weight sculpture” which earned him a reputation in the contemporary art scene from early on in his career. This three-dimensional sculpture made from a large number of fragmented photographic images initially gives the viewer a sense of contrast between light and weight, and contradiction of interior an exterior at a first glance. These are probably the reasons why Gwon’s works so effortlessly grab the viewer’s attention. However, it becomes clear that all of this is just a beginning Osang Gwon’s commitment to explore and contemplate on the subject of ‘sculpture.’ After much observation and understanding of his journey of creation, I strongly believe that the artist, from the very beginning until now, has been working as a ‘sculptor,’ who, even from the early on, has transcended the genre of ‘sculptural art’ and moreover is constantly exploring and challenging the two imperative themes of space and time. In regards to the “Deodorant Type” series, it is very easy for people to associate it as a large quantity of mosaic images pasted to become a photographic work. However, Osang Gwon’s approach this method is to create a three-dimensional image. This transformation is very interesting. From the most fundamental stage, a photographer selects an image from the real-life using his camera and turns it into a fragment of time and space. These choices and integrations 5

of various fragments become the ‘real image’ that the photographer allows the viewer to see. A sculptor, on the other hand, makes molds, shapes, sculpts and chips off the excessive portions and finally, through the process, completes to create and reveal the subject that was originally in front of his eyes. In this regard, both photography and sculpture have an attribute of editing and reshaping reality, while at the same time carrying the implied meaning of ‘simulacrum.’ Those three-dimensional images of people and objects in the series of “Deodorant Type” are like countless fragments of time and space before reaffixing them back to the sculpted mold and integrating them to allow the work to successfully capture a sense of reality. If it was only a pursuit for light-weight sculpture, one can simply print several large-size photos, wrap and glue them on the mold. However, if so, what this sculpture would convey is nothing more than a form and a visible structure, which appears as a three-dimensional image patched up from different fragments of images and constructed. However the “Deodorant Type” differs in that, even through various perspectives, it would be impossible to see the entirety in which a spatial image is created with various pieces are plastered together. To a sharp contrast to the “Deodorant Type” series that represents an initial attempt to explore the possibilities of sculpture, “The Flat” series is a Osang Gwon’s rather extreme leap. The production process of this series of work is full of irony and sense of humor. Osang Gwon crops images of such subjects like jewelry, cosmetics and watches that reflect today’s consumerism culture from the magazines. He then adds wire support on the backside of the selected images and produces works with three-dimensional spatial image endowing them the attribute of a ‘sculpture.’ What’s more interesting is that, Osang Gwon brings these simple sculptural elements together and finally presents them to the viewer in a flat 2-dimensional photograph. If completely unaware of this production process, when viewing these gigantic and glittering photos, the audience would be likely to think them as 6

another series of simply pasted ready-made works of photograph about consumerism culture. But when closely observed, the viewers would find that the perspectives of every single image in these photos are disorderly, chaotic and bizarre. On another observation, the viewer will realize and discover fine wires captured on the image. Now, let’s pause for a several seconds to recall the process again: a magazine photographer places luxury objects (three-dimensional) to take photos of the subject (two-dimensional), Osang Gwon crops these photos and makes them into a simple sculpture (threedimensional) before taking pictures of them (two-dimensional). The entire process contains several transitions between the subject being three-dimension and two-dimension, repeatedly stretching and compressing the spatial distance of viewing. It is well-known that sculpture is a spatial work of art, and Osang Gwon takes a bold step to challenge ‘space’ in “The Flat” series by showing the solid space of sculpture using flat planes and hiding the threedimensional space recorded by the photographer. Meanwhile, more importantly, he creates a space of idea that allows the viewer to use their imagination and reflect about the production process, which, in my opinion is exactly what this series of “The Flat” is about. This summer I paid another visit to Osang Gwon’s studio, where I saw several of his latest works from “Relief” and “New Structure” sculpture series. To my delight, through repeatedly honing these new series, Osang Gwon’s attempt to explore the sculptures between the two-dimension and three-dimension appears much mature and complete. In these two series, Osang Gwon started using a large amount of various off-the-shelf photos or images found online, printing them on a wooden panel or aluminum sheet and naming them as “Relief” series capturing the feeling of a relief or a completely freestanding “New Structure” series. The “Relief” series made from wooden material is full of discerning characteristics of vintage and appears to be mild and soft, while the “New Structure” series made from aluminum sheets appears sharp and edgy as well as intricate and complicated just like an urban jungle. As always, 7

in these two series, Osang Gwon chose the ‘simple and rough’ approach to make flat images into a ‘three-dimensional realm’ in which he directly layers several wood sheets imprinted with different patterns and creates relief work with a sense of space through creating volume and void. Moreover, he fabricated directly erecting several large-sized aluminum sheets imprinted with patterns, piecing them together and leaving them standing, therefore, constructing a three-dimensional sculpture. What I refer to as ‘simple and rough’ is the artist’s complete disregard of the visual perspective of the images themselves and the perspective relationship between them, only attributing the images with three-dimensionality in the most convenient way possible. But it is exactly this approach that makes the images in the work appear half-realistic and half-illusionary, originally irrelevant images, when affixed on top of a wood panel or aluminum sheet becomes a ‘thing (image)’ with volume before being adhered together to create a spatial relationship of front, rear, left, right, top and bottom. This new spatial relationship combined together with perspective space of the each image, results in to hyper-reality and reality coexisting. This is especially true of the “New Structure” series, where people can walk around the work and feel overwhelmed by the gigantic flat images. Meanwhile what the viewer is seeing constantly changes as he or she walks and looks around the work. When walking around the colossal image, I, in various moments, thought about the Chinese or Eastern cavalier perspective, where the painter’s point of observation is never fixed or confined to a single point of view. Instead, when necessary, the artist, while observing would translate and organize his visual field on to his canvas, which is closely related to the Eastern philosophy, in which time and space are always fluid, continuous and limitless. Osang Gwon, who has received a traditional western art education, unconsciously reveals a strong Eastern aesthetic philosophy through his works. The artist incorporates images that seem to be from more than one individual’s perspecitve on a three-dimensional space, therefore forming a laminated, interlaced temporal and spatial relationship 8

where the hyper-reality coexists with reality. Meanwhile, these applied fragments form a flowing curve interweaved with images to create another abstract visual impression. It is apparent that the concept of the “Deodorant Type,” “The Flat,” “Relief,” and the “New Structure” series all share the concept of multiple constructions of time and space. Osang Gwon’s works have always been favored by the fashion industry, probably because of the works’ dazzling colors and various elements of popular imageries. It is undeniable that Osang Gwon has a highly accurate sensitivity of the cultural pulse. As our culture enters into an era where images are increasingly omnipresent and everyone has an easy access of images from all domains of the world through computer or cellphone. We create an impression that all of a sudden we are closer to the world, but are we? What we usually see is nothing more than a frivolous image, but we mistakenly believe that we can rapidly understand everything. It is like a three-dimensional world comes into being by simply and roughly propping up images, or piecing photographic fragments together representing people and objects. Isn’t it an irony of the modern society? Are we, the modern people who understand the world through internet, actually being increasingly distant from the real world? In November 2016, Osang Gwon will be holding his first solo exhibition in Shanghai at Arario Gallery Shanghai, and I am very glad to have a chance to introduce Osang Gwon’s works to the Chinese audience and write a brief interpretation of his works from my own perspective. The works to be exhibited at the upcoming exhibition mostly cover all of his important series, together exhibiting the process of how he has created and evolved so far. I hope the audience will not only be attracted to Osang Gwon’s glittering and colorful sculptural works, but also find their own understanding and presence through the multitude of space and time created by these works. As mentioned earlier, the essence of sculpture is not about the visual space, but in the minds of the audience.

Osang Gwon After his 1998 photography-sculpture Deodorant Type series, Gwon Osang took a major step forward in the concept of photography and sculpture with The Flat series in 2003. Gwon's earlier works, Deodorant Type series, employed the process of taking over 1000 photographs were selected to create a sculpture. However, the artist's recent works take this process a step further by borrowing and transforming internet images that have been taken by others rather than himself. The Flat series features cut-outs of images that appear most frequently in advertisements, such ad watches, jewelry and make-up. The pieces of cutout paper are fixed with simple wire structure, each becoming an individual sculpture. Then the installation is photographed into a flat surface, becoming both photograph and sculpture.