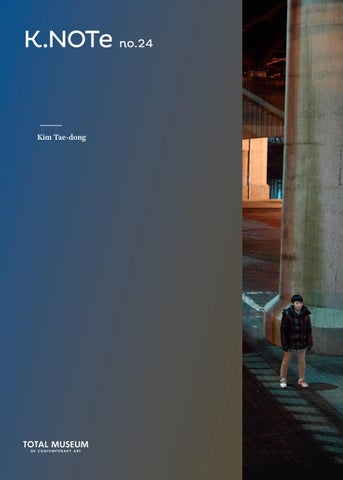 Helplessness I’ve gotten used to hearing words like “anxiety,” “listlessness,” and “depression” coming out of people’s mouths. All around, we see an ineluctable “eternal present” – the product of overheated neoliberal competition and a debt society – and the resulting existential crisis. The character appearing in the films Helpless (Byun Young-joo, 2012) and Breathless (Yang Ik-joon, 2009) and the stories “Moms” (Kim I-seol, Things No One Says, Moonji, 2010), “Welcome” (Kim I-seol, Welcome, Jaeum & Moeum, 2011), “Thirty” (Kim Ae-ran, Vapor Trail, Moonji, 2012), and “I Like Sweet Things” (Jeong Mi-gyeong, Changbi Quarterly, Spring 2012) are vagabonds experiencing existential crises under a neoliberal system. They are helpless. They can do nothing for themselves, nor can they expect help from others. They are in a position where they can only adapt to the present. They are stories that sound like someone else’s life, and it is not easy for us to recognize that we are no exceptions. Everywhere, people speak of “hope” – after several stages of packaging. They struggle to achieve hope in a world of “hard work.” Yet they are still anxious, listless, and depressed. Rather than succumbing to the false hope that they might escape, shouldn’t we usher the present to its extremes and confront it at that point of desperation?

(Night) Isolation I observed Kim Tae-dong’s Day Break series in 2014, while I was preparing for Walker of Night 01 (NowHERE Seoul, planned by 4

Starry.Starry.Night ) Signs of self-expression in his photographs

were obviously minimized; figures that seemed like they ought to fit, yet did not fit, faced forward in natural but very awkward poses, and with expressionless faces to boot. There was no way of knowing why they had come here, where they had come from or where they were going, yet Kim had created an attractive nighttime city space where everything seemed to have stopped. I was curious about the way the artist conceived of “night.” As the planner of Walker of Night 01, I had thought of night as an invisible swarming produced by the erasure of boundaries. But – if I may be blunt – Kim Tae-dong’s night was simply night. The self-evident nature of night was presupposed and two-dimensional. I was still relying on erasure of boundaries, rather than dissolution of boundaries. In the end, I couldn’t follow the exhibition (although I remained curious what night was to Kim). A few months later, I met the artist, and we talked about work. I looked once again at the Day Break series. What I found in the process was Kim Tae-dong as an artist who loiters, strays, wanders. This overlapped with the figures in the photographs. What had led them to wander? Why did their expressionlessness seem so natural? Why were they isolated? Perhaps Kim Tae-dong is not talking about night after all, but about isolation. Kim’s work becomes deeply meaningful when the story’s emphasis is placed on isolation instead of night. The figures’ wandering stems in some part from the weariness of life. They wander to endure, to escape, or because they are lost in thought. In the end, though, they are isolated. Whether it is the bleakness of the night, the dilapidated state of the spaces, or the foregrounding of buildings, the figures in Day Break are all isolated. They have no one around them. The only person nearby is the photographer before them, Kim Tae-dong, meeting them by way of the slender strand of coincidence. For all the bold poses they adopt, they are nonetheless isolated. They cannot do anything for themselves, nor can they count on help from anyone else. Isolation is not “unquotidian and unrealistic” (Kang Su-jeong’s “His Strategy, Day Break” in the Kim Tae-dong collection DAY BREAK BREAK DAY). It is not “an attempt to see familiar spaces as strange” 5

(Shin Su-jin’s “An Exploration of the Fluidity of Center and Periphery,” also in DAY BREAK BREAK DAY) or “a familiar yet strange landscape” (from Gi Hye-gyeong’s recommendation in Navercast’s Hello! Artist). It is the painful reality we have wished to conceal, a familiar landscape that continues to repeat itself. We simply did not want to see it.

Communion in Isolation The Break Days series forms a pair with Day Break, which foregrounded isolation. The two series share a similarity in their sunrises and sunsets. Night transforms into day. In truth, the difference is not great. Isolation, which is crucial to the formation of meaning, remains present within his photographs. The difference lies in the presence or absence of human figures. To be sure, figures are present in the Break Days series. But Kim also speaks of isolation purely through spaces. In a body of work that has used figures met by “chance” to highlight isolation, the use of spaces alone to discuss isolation is exceptional. The difference between the series is that the photographer emerges to the fore from his concealment behind the figures. In this series’s photographs of daytime spaces in Kim’s old neighborhood of Yeonsinnae in Seoul, the artist abandons the observer perspective and looks at himself. Yeonsinnae, where he spent all of that time, is a familiar place. Familiarity means that he is not isolated. All around are things with which relationships could be formed. Yet the spaces in his photographs are isolated. He passes spaces he must have seen countless times in the day and nighttime, but his feeling is one of helplessness. Here and there are landscapes of loneliness, of “nothing to be done.” The solitary feeling within the landscapes’ grip is the artist’s, but it is not the artist’s alone. He presents a story not with the isolation of some specified figure, but with the isolation of “people,” including us. The urban isolation that Kim Tae-dong has discovered is not a choice made purely to satisfy himself, something that cannot be shared with 6

others. It is something assigned. The typical model of the human being that the era demands is one forced into untrammeled competition, through isolation rather than solidarity. To survive the competition, one takes isolation upon oneself – and at some point it returns to us as pure isolation. This is not the result of misguided values, of not living a diligent life or of making some kind of mistake. It is because of powers that cleverly, invisibly compel us to “stay put,” and our acquiescence to them. Kim steps away from complacent false hopes and confronts a here and now where isolation has become obligation. So will we forget isolation? Or will we never forget isolation? It’s a difficult question. If we do not forget isolation, we will only become more isolated – yet not forgetting isolation is nothing more than fantasy. The important thing here may be communion in isolation. It is a matter of viewing isolation as something we must share, rather than reducing it to a simple issue of agency. I have before me right now an image from the Break Days series. It shows a sign indicating the Gupabal and Yeonsinnae subway stations, a large apartment block, and before it another big, brown brick building. There is a chimney of indeterminate nature and a container box. An odd assortment of people are leaning against each other, forming a landscape. I call up scene after scene from this landscape and listen to their stories. And I tell my own story. This is not a heterogeneous, unfamiliar landscape; it is isolation from one another. Yet he speaks of isolation itself, reaching his hand out to each one. It asks us to grab on to even as feeble and slender a strand as Kim Tae-dong meeting someone by chance on the street at night. Anxiety and fear invite isolation. What we need to overcome that anxiety is the creation of crowds. Instead of dressing up forced isolation as hope, as romanticism, as something strange or disparate, we need communion through isolation, and the formation of groups as a result. Just as the figures in the Break Days series create landscapes – bizarre, uncertain, but their own.

Kim Tae-dong Kim Tae-dong graduated from the bachelor’s and master’s programs in the pure section of the Chung-Ang University Department of Photography. His work explores the spatial and regional boundaries of the city, focusing on people in the city’s peculiar and strange settings – sometimes including the places where he himself has lived. After he has created an image of an urban space and a specific moment, his attention turns to the people appearing in the frame, individuals harmonizing with the space. But instead of intervening directly in their lives, he focuses on the imagination that the photographic medium confers on the viewer. Kim was one of three finalists in 2011 SKOPF Awards held by KT&G Sangsangmadang and held a solo exhibition after selection for a 2012 Gallery Lux funding program for emerging artists. He won honors at the 4th Ilwoo Photography Awards held by the Ilwoo Foundation in 2012, and staged the solo exhibition Day-Break-Days (2013) at Ilwoo Space in 2013. He has also taken part in numerous group exhibitions, including site & space (DOOSAN Gallery, New York, 2013), Young Korean Artists 2013 (National Museum of Contemporary Art, Seoul, 2013), The Future Colors of Photography (GoEun Museum of Photography, Busan, 2012), and the Houston FotoFest-organized International Discoveries (2012). taedong123@naver.com

Lee Dae-beom Lee Dae-beom peers about here and there, engaging in the kind of woolgathering he enjoyed as a child. He uses this as a basis for writing, planning exhibitions, and working in general. He is currently busy watching movies every day, focusing on the ways in which Korea’s modernity has been visualized.