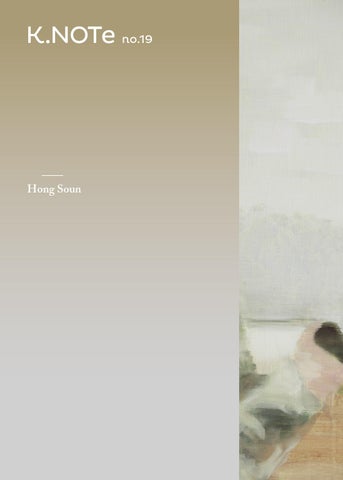 2015 Date of Publication ÂŠ Author and artist The reproduction of the contents of this magazine in whole or in part without written permission is prohibited.

Image Credit Courtesy of the artist

Unconventional Landscapes and Image That Heal The Recovery of the Landscape and Healing the Accident Hong, Soun’s painting called ‘Sidescape’ presents a new perspective on landscape art. His view of the traditional landscape is that it is merely a visual representation of a specific scene in nature using an arbitrary method. A landscape is a combination of various components (such as mountains, trees, streets, and houses) which the artist’s eye plucks from the environment and puts into a frame according to the composition and formation which is considered to be acceptable at the time. That’s right-- without an exception, all landscapes are merely the result of a union of a cropped worldview interspersed with fragments of nature which have been brought into one’s frame. Hong’s segmented, or fragmented, landscape, ‘Sidescape’, cannot be included in the conventional landscape genre without some additional explanation. ‘Sidescape’ is a secondary result of a segmented and fragmented landscape which has been resegmented and re-fragmented. The distinction between his painting and the conventional landscape genre comes from the fact that ‘Sidescape’ internally contains many more components and divisions. To the viewer, it is immediately obvious that his painting is true to the specific object that it focuses on, whereas landscapes are composed with the intention and purpose of depicting an entire scene. One of the primary reasons why fragmented scenery is different from a conventional landscape has to do with the cognitive mechanism. While a conventional landscape is a product of a process that brings nature into a perceivable field of view, ‘Sidescape’ shows only the fragmented parts of nature, and actually sends the object-- whether it’s a scene or an event-- beyond the range of perception and allows it to return to the state it was in before it was perceived. ‘Sidescape’ is a realm where the duty and responsibility of a landscape is unbound and the essence of the event is liberated from the pressure of its contents. Hong, Soun’s ‘Sidescape’ painting is a landscape which is composed of excerpts of one image. It is a cropped, fragmented, deficient landscape. The source of this image is another image, not actual scene in nature or an actual event. In his painting, nature is not an unpredictable force. It is a contained element, similar to the way that information from internet or mass media can be captured and consumed at any time by any person. The event depicted in his painting is in a similar context. The events that ‘Sidescape’

has chosen are not something that the artist has collected while risking his life in the middle of a war on some deadly battlefield. The source of all those events is just a series of images. The source comes not from the events’ origin, but from news footage of those events. The story of the image, whichever it is, is not the focus of the work to Hong. Sometimes, it could be a historical turning point or an important political event. In fact, the original photo of an image is often related to war, a disaster, a controversial incident, or an unfortunate accident. However, the event itself is not important at all. Whatever it is, it is equally treated as a motive of the neutral landscape. Hong is interested in the de-construction of an event and the possibility of the aesthetic upheaval that results from the deconstruction rather than that which is inherent to the event itself. In other words, it is about the beauty as a potential form which is difficult to recognize because it is laid under the event and obscured by its contents. The process of discovering scenery from the events as well as the process of finding the splendid lights which survived curse and misfortune from tragic battlefields and disaster are the best forms of symbolic healing treatment, are they not? Hong extracts these events into a painting which gives a calm, peaceful, and relaxing state of mind from an image that originated from heavy and dark events. This process eliminates the root cause of despair and hatred from horrific crimes and symbolizes the healing and reconciliation which eases sensitive political tensions that stem from the conflict. It also symbolizes the rescue of repressed images in the media and internet which are tangled with inhuman politics and social events. Fortunately, a few selected images by Hong were spared a terrible and tragic fate, and have been preserved as part of his work. To heal history, reconcile event and scenery, and rescue the image from the news footage of the bloody, muddy political and social mess, the perspective of ‘Sidescape’ shifts from the center of the photography to its fringe. The next step is selecting individual parts of the event. The standard of selection is that any piece, regardless of size, must share the context of the entire situation while at the same time disconnect itself from the situation. Thus, it should be dialectical. Then, the selected and gathered parts go through a process of enlargement, depiction in paint, and are then remade as an independent landscape which is connected to the event dialectically. As you can see, ‘Sidescape’ is the aesthetic strategy which dismembers the events from the political and social context. The journalistic trait is de-constructed and re-constructed as the

landscape through the image fragmentation process. It is a process which fetches out the potential of the image which was hidden in the events and gives beauty and life to the void in the world of neutralism. Is this not the very duty of Art? Unconventional Landscape Hong’s cropping method used in ‘Sidescape’ is irrelevant to the destruction or deconstruction of scenery. ‘Sidescape’s’ fundamental objective is the recovery of the scene, not a denial. Its objective is also to reveal the aesthetic of the event which is hidden at its center and to examine the potential of imagery that has been cropped from the scene to see if it can be a landscape by itself. The particle which is detached and fragmented from the whole is like an indicator of other scenery, which is not at all a conventional way of perceiving a landscape. It’s like a chapter of a novel whose expression ‘consists of endless monologue’ or is a ‘continuation of silence’. It is reminiscient of Proust’s writing, which allocates thirty pages to the listing of images which come across the character’s mind before falling into sleep instead of using a typical description, such as ‘fell asleep like a rock’ or ‘dropped like a log.’ Like Proust’s isolated and irrelevant words which made the story seem coherent when we read between the lines, Hong’s painting conveys meaning

when we “read between” its lines. Hong is well aware of the fact that this unsatisfactory and indirect conversation is the original method of the painting. “Like our life always does, the painting gets off the track of logic. When a painting, which is riddled with uncertainties, is interpreted using the logical constructs of a critic, the light of the painting fades away. Then, it becomes famous in the secular world.” Hong, Soun

The process of creating a unified world composed of a series of ‘Sidescapes’ by horizontal and vertical arrangements is very interesting. They are neither edited nor censored. They create the open-ended and writhing landscape before it becomes one of the conventional landscapes. Through this unconventional landscape, Hong’s painting could be received as a challenge to the conventional model of communication. It could be seen as an intended, fabricated, uncomfortable and also impure communication. Hong himself knows that his painting is unkind because of these reasons. However, this unkindness will lead people to better communication by freeing them from the binds of conventionalism and helping them realize that this conventionalism will make them lose their own time by offering pretentious kindness.

Hong Soun Hong Soun’s experimental art encompasses various mediums and his unique perspective in art has received continuous attention from mass media which named him a postmodern leader. His art has been evolved around the philosophical idea on “part and whole’ of politics, economy, and culture, for which he purposely takes fragments from peripheral area of the image he acquired for his painting in order to talk about the whole and its inevitable misapprehension. This aspect is how he got the reputation as post modernist. Of course, Hong has experimented with object, installation, video and many others. But he moved on the traditional materials, landscape, and figures in simple composition with reserved colors creating a space where his empathic gazes are contained. In doing so, he painting opened up new chapter in the field of paintings.

Sangyong Sim He was born in 1961. He earned BA&MA in Western Painting at the college of fine arts, Seoul National University. He had lived in France since 1989. He studied at University of Paris VIII for his MA and Ph.D(D.E.A) in Formative Arts. In addition, he received a Ph.D. degree in art history at University of Paris I. Currently he is a professor at Dongduk Women’s university, curatorial studies and management department. Professor Sim wrote several books as follows: Art of speed; Desire and loss of contemporary art; Museum without paintings: ways and prospects of public-age; Humankind history in the perspective from masterpiece; Genius is dead. Also he translated The 9th art cartoon in Korean.