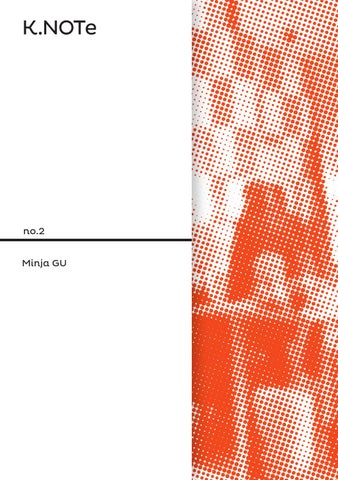 * Sooyoun LEE is born in Seoul, Korea 1979. She studied Linguistics in Seoul National University and recieved M.A in art history on the theme of “Nam June Paik: performance to video art, expanding of perceptions.” Her research interests include contemporary media art, screen studies and performance. Since 2010 she has organized exhibitions such as <Out of the Silent Planet>(2010) first media collection show from the museum, <Public Project Chonggye>(2011), <Art of Communication: Anri Sala, Yang Ah Ham, Philippe Parreno, Jorge Pardo>(2011) and performance exhibition with Hayward Gallery in London <Move>(2012). Now She is working on the New Museum branch opening exhibition, <Collection from NMCA>(2013) which will be held in 12th. Nov. 2013. leeks2k@gmail.com

** Minja GU (b.1977) works with various media including photography, video, installation, and drawing based on personal performances which start from ordinary behavior and the questions it raises. She graduated from the department of Painting at Hongik University with a BFA, from the department of Philosophy at Yonsei University with a BA, and from the department of Fine Art in Korea National University of Arts with an MFA. She participated in various residency program including Ssamzie Space studio program, the Hangar Residency in Barcelona, and the ISCP in New York. In 2009, she had her first solo exhibition “Identical Times” (Space croft, Seoul) and her second solo exhibition was in 2011, entitled “Atlantic-Pacific co.” (Moore Street Market, New York). She participated in many group exhibitions: “Taipei Biennial” (Taipei Fine Arts Museum, Taipei, 2008), “Now What” (Space Hamilton, Seoul, 2009), “Anyang Public Art Project: Odong - Being Residents” (Anyang, 2010), “VIDEO: VIDEO” (ARKO Museum, Seoul, 2010), and “Trading Future” (Taipei Contemporary Art Center, 2011). Recently she was selected as one of the young artists for the exhibition“New Visions New Voices”(National Museum of Contemporary Art, Korea, 2013). http://www.guminja.com/ http://www.atlantic-pacific.co/ guminja@gmail.com

21st century humans live a life that is inundated with commodities. Dwellers of metropolitan cities live while consuming accumulated goods and produced messages. Cities roll away to the cycle of production and the rhythm of goods - not by human cycle. The relationship of the people is mediated through all kinds of possessions and electronic exchange systems. 1 GU Minja’s works include ordinary objects and conventional behavior that are seen every day in the city. These objects loyally follow up Jean Baudrillard’s ‘system of objects’, which means that objects are consumed because they are produced. Plastic bags are used as plastic bags that are blown away in the wind, and Dunkin’ Donuts disposable coffee cups as recyclable paper cups; electric heater as a heater that emits heat; a mirror as a mirror that reflects light. They are all used as they are. There is no deception or twist. Without any decoration, the circumstance and purpose for which the goods were produced are appropriated. The only intermediary agent that transfers the usage of ordinary objects to the artworks is that the duration of use has been prolonged ridiculously, and the inevitable abandonment of the efficiency of objects. In this regard, GU Minja’s objects illustrate fundamentally different attributes from that of the readymade that is formerly known to have become a part of art through its appropriation for a different use. 2

objects like everyday junk from the attic or rubbish dump yard, but insisted on endlessly emptying meaning through re-placing the objects and painting over them. For instance, bicycle handles, dolls, cups and clocks lost their initial functionality and existed only as symbols for its utility. 3

On the other hand, GU Minja’s objects, in spite of their being ready-made in her artworks, do not lose their intrinsic functionality. Atlantic-Pacific co. (2011) shows souvenirs, sake bottles, carpets and food products that can still function as they are meant to. Objects found in historic places on Atlantic street and Pacific street have added a function by the memories that are related to their original and historical significance - that these objects were part of an exchange of goods across the oceans. After the historical background is inserted, time and memory are added as new exchanging values in the sake bottles, carpets and food products. The goods have added value that is not really necessary. The goods are not anonymous, but are part of the context involving specific time, space and people. This context neither belongs to the artist nor to the viewers appreciating the works. The context belongs to the Atlantic-Pacific Company, as ambiguously indicated, and to the original owners of the goods of the company. However at the same time, the company and the owners are also very obscure. The original owners can be from Chinese mass-manufacturing factories, Malaysia’s small-scale production places, or Latin American, Canadian, and American shops. After all, however ambiguous and obscure that may be, through the process of very universal, historical remembrance, the anonymous goods return to our own context. The World of Job (2008) captures the re-experiencing of a job searching story of one ethnic local woman 40 years ago, whom the artist happened to meet in Taiwan. In this work, the essence of job searching does not change, but is just employed as it is. The problems that are encountered in the course of job searching, like language barriers, or discrimination, is reality without exaggeration or reduction. Only the circumstance has changed: 40 years later, it is about a Korean artist job searching in Taiwan in 2008, but it does not change in terms of the exchange of labor. It seems to have started from a concrete story, but the story of the ethnic local woman is the story of Korean miners and nurses who went over to Germany in the 1970s to make money, and also it is the reality of the artist making one’s way to New York in the 2000s in search of better opportunities; it is the story of the Germanic race who migrated southwards to the Roman Empire for their survival 800 years ago. By appropriating the narration that happened 40 years ago, the artist arouses the universal empathy of the human experience that tries to prove the value of labor in an alien society while endeavoring to become accustomed to new culture and language. The strategy of appropriating the object’s functionality and context in the territory between art and reality is the most efficient means to access the masses that is no longer moved by illusion, also often used by real-variety TV shows sprouting everywhere. Similarly, the strategy could become a direct apparatus which take in a context beyond a reality that appears in everyday life. In The Truman Show (1998), the creator who created reality by setting up a virtual reality says in a self-mocking tone, “We accept the reality of the world with which we are presented,” but in spite of that, there always exists a person who questions the reality, just like the protagonist, Truman, did. Artwork starts from there.

Publisher: Total Museum of Contemporary Art Editor-in-chief: Nathalie Boseul SHIN Editors: Juri CHO, Yeong Min KIM, Hyejin KIM, Jung Hyun Anna PARK, Jeongsun YANG Designer: Tae Jung KIM Special thanks to The Binders, the flat All rights reserved. No part of this publication may be reproduced or transmitted in any form or by any means, electronic or mechanical, including photography or any storage and retrieval system without the permission in writing from the publisher. As usual, no responsibility is taken for the correctness of all facts, content and text.