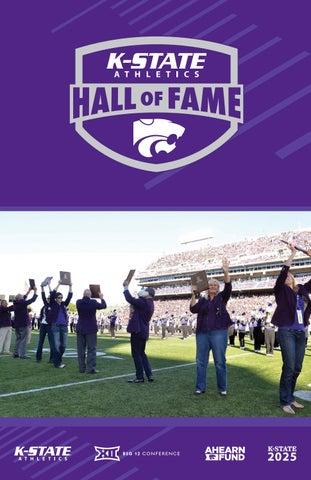 WELCOME TO K-STATE The K-State Athletics Hall of Fame process is an integral step in our vision of A Model Intercollegiate Athletics Program, and the pages within this b  ook showcase those who have been enshrined as the best of the best in K-State Athletics history. Â Each of these inductees has made a lasting impact on K-State Athletics and Kansas State University, and I hope you enjoy our in-depth look at each class and our process. For more information on our hall of fame, or K-State Athletics in general, visit www.kstatesports.com. Go â&#x20AC;&#x2DC;Cats!

HALL OF FAME HISTORY The idea for the Kansas State Athletics Hall of Fame was born in 1989, when thenathletic director Steve Miller conceived the notion of honoring those who have participated in the program with special distinction. In the spring prior to a standard induction year, a selection committee meets to consider all those nominated from various sources. A three-fourths vote of the selection committee is required for induction, with those receiving a majority of votes automatically being considered in the following induction cycle. There are three categories for consideration: former athletes, former coaches and administrators, and h  onorary nominees. For athletes to be considered, they must meet the following: • Be the recipient of at least one varsity letter. • Ten years must have passed since graduation of their class, as determined by the date of matriculation. • Have displayed outstanding achievement in intercollegiate athletics. • Shall possess or have possessed other qualifications that, in the opinion of the committee, makes such a person worthy of the award, such as outstanding sportsmanship, character or integrity, and be a person who has brought great distinction to the university. • Must have carried on the values of Kansas State University after graduation. For coaches and administrators to be considered, they must meet the following: • Have served a tenure of at least five years in the athletic department. • Have departed from the department for a period of at least five years. • Have made an outstanding contribution to the Kansas State athletic program. For honorary selection, candidates must meet the following: • Have made a truly exceptional contribution and service to the athletic department. For more information about the K-State Athletics Hall of Fame, please contact the K-State Athletics Communications Office at 785.532.6735.

• Three-sport star in football, basketball and track & field • Football All-American in 1931 • Played in the NFL for the Chicago Cardinals

THE FAN SUPPORT COMES TO MY MIND FIRST...WE HAD NOT ONLY OUTSTANDING BASKETBALL PLAYERS, BUT ALSO WONDERFUL PEOPLE. - TEX WINTER

I WILL CHERISH THIS HONOR FOR THE REST OF MY LIFE. - ROY DEWITZ

THERE WERE A LOT OF GREAT MEMORIES. YOU DON’T COACH ANYWHERE WITHOUT YOUR BEST MEMORIES BEING THAT OF YOUR STUDENT-ATHLETES THAT YOU COACHED. - JUDY AKERS

• Only Wildcat with 1,000 points and 1,000 rebounds for a career • All-American and Academic All-American his senior year • 11-year NBA career including two NBA titles with the Chicago Bulls

• Eight-time Kansas Sportscaster of the Year • Member of the Kansas Association of Broadcasters Hall of Fame • Known for his “Big, Big, Big, Big, Big” victory calls of K-State Football and Basketball

Architect of the “Greatest Turnaroundin College Football History” Five-time National Coach of the Year Has led K-State to two No. 1 national rankings Two Big 12 titles Fourth person in the history of college football to be inducted into the College Football Hall of Fame as an active coach

Two-time Consensus First-Team All-American Two-time Big 12 Player of the Year 2004 Big 12 Female Athlete of the Year No. 6 overall pick in the 2004 WNBA draft 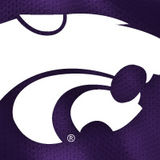 Explore the inductees into the K-State Athletics Hall of Fame

Explore the inductees into the K-State Athletics Hall of Fame