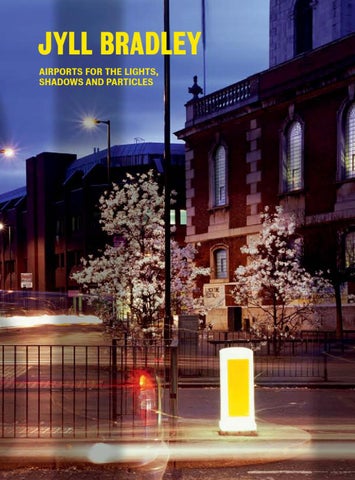 JYLL BRADLEY AIRPORTS FOR THE LIGHTS, SHADOWS AND PARTICLES

Through the process of photosynthesis, plants are sustained by light. In this microscopic everyday occurrence, something wonderfully creative happens; a natural life-giving force effects a chemical reaction and results in growth. Radiant energy is turned into food. Biology becomes poetry. Similarly in photography, light is used to create images. Traditionally, light affected chemicals on paper or film. Now, in an electronic age, light sensitive sensors in a camera capture an image and store it as a digital file. However you describe the activity, biological or photographic, the process and effects are still magical, and it is small wonder that the empirical and metaphoric nature of light has enchanted scientists and artists for centuries. As a part of this critical system Jyll Bradley has thoughtfully investigated the formal and expressive properties of light for the last twenty years. Describing it as a ‘protagonist’, light sits at the intersection of her practice, informing and stimulating her endeavours in photography, sculpture and writing.2 PostMinimalism has been the consistent stylistic mainstay of her career; a hybrid approach informed by Conceptual art that challenges traditional Minimalist values.3 Bradley’s innovative use of the light box in the gallery – hitherto a commercial visual format used in advertising – combined with her directed use of text and blank sculptural panels clearly indicates her concern with formal aesthetics. The panels though are Bradley’s most hermetic response; shimmering, white, flat metal sheets varying in size and typically arranged leaning against or on the wall in minimalist rapport with the light boxes. Ultimately through this partnership of forms Bradley explores a territory made familiar through the likes of Carl Andre and Roni Horn, while simultaneously attempting to address the politics of identity akin to Mary Kelly and Andrea Fisher.

While light boxes and sculptural panels have been the most obvious and constant part of her dialogue with light, lately Bradley’s oeuvre has expanded to include drawings. Commissioned by the Bluecoat for inclusion in Airports for the Lights, Shadows and Particles, she produced three series of light drawings. Each comprised of ten A4-sized works, they are small in contrast to her light boxes and panels. Relaying a much more intimate engagement with light and luminosity, the drawings exhibit a quiet yet playful energy suggesting a re-acquaintance of the artist’s love of working alone in the studio, in contrast to her collaborative way of working with photo labs and fabricators to produce larger works. In the context of a survey exhibition Bradley’s drawings are an astute addition. Sometimes their very title hints that she is hungrily taking critical stock of her practice and has actively embarked on an opportunity for studied review of two decades of work. One series entitled Nobody gives you freedom you have to take it is inspired by the words of artist Meret Oppenheim; another, Look at me now and here I am takes its title from a classic anthology of the collected writings of Gertrude Stein. The artist acknowledges and celebrates the distance travelled from her participation in the 1990 British Art Show to her 21st century present. Collectively, the drawings can be seen as an appropriate and elegant meditation on Bradley’s own studio practice. Closer examination reveals a concern for form and process which locates them in a pivotal relationship to photography and sculpture; indeed the artist describes the drawings as ‘intimate allies of the light boxes’.4 For Nobody gives you freedom you have to take it (2011), Bradley created  assemblages from simple, everyday materials; ephemera collected from the discarded remains of researching and making light box and sculptural works including various bits of paper and cut-outs, old train tickets, snippets of text, transparencies and ink blots. After photographing the assemblages, Bradley then printed the subsequent images on soft, dimpled watercolour paper, resulting in works that give the illusion of being elaborate tonal studies; still-life drawings made with pencil in painstaking fashion, a memento mori to industry. They range in abstraction and order; some are carefully arranged and suggest narratives reminiscent of a theatre stage or studio noticeboard, while others offer a more sporadic collection of materials.

From an informed glimpse one can’t but be reminded of Picasso’s experiments in collage or Schwitters’ Merz pictures. Bradley challenges the picture plane by layering objects to create real and imaginary spaces. Shadows become complicit in her spatial sleight of hand. Yet the works push beyond mere acknowledgment of the legacy of modernist collage. These personal sketches expose delicious secrets from Bradley’s studio and her selection of objects is a self-audit. Significantly, she owns up to the dichotomy of making: how can so much waste come from the effort of making something so minimal? In contrast to Nobody gives you freedom you have to take it, Bradley’s other drawings are made without a camera, although they still rely on a mechanical process of capturing the effects of light. In actual fact they are xerographs, or as they are more commonly known, photocopies. Their flight is knowledge, space is their alienation (2011) is a collection of images of assemblages Bradley made directly on the glass of a photocopier. The images are printed on acetate and mounted on card, which results in the surface of the drawing appearing slick and reflective. The compositions are pared back and sparse; motif is found in circles, concertina paper folds and the trompe l’oeil of sharp slits in the surface of the drawing. Only a recurring ink blot breaks the hegemony of geometry. Drawings comprising the series Look at me now and here I am (2010–11) were similarly made on a photocopier, but are printed on watercolour paper. Again with the suggestion of soft, delicate shading, Bradley tricks the viewer into believing the drawings are pencil. As well as now familiar constituents of composition – geometric forms in cut paper and ink blots – new elements appear in the form of photographs taken by Bradley, depicting advertising light boxes in London Underground stations. In each case the light boxes are the backdrop of everyday metropolitan life as fleeting forms of commuters and tube travellers scurry past, disappearing down anonymous tunnels. With both these series of light drawings, Bradley’s experiment with luminosity rests with the automatic performance of the photocopier; an intense beam of light scans across the glass picture plane, covertly sweeping for solid form like a radar. If the object detected is not entirely flat the resulting image is distorted and the space between layers is exploited in shades. Bradley

had to physically manipulate the assemblage through holding the arrangement in place while the copier light completed its scan. Ultimately she relinquished degrees of control; she was not directing the light or regulating its intensity. Subsequently the process of making these light drawings could be characterised as performative and temporal; the artist’s act of making relies on the long ‘sweep’ of the photocopier light rather than the definitive brevity and ‘click’ of the camera’s shutter. Another curious consideration of Bradley’s cameraless light drawings is that they could be seen to locate Bradley’s contemporary engagement with light more concretely within a canon of the history of photography; a categorisation which has not been overtly applied to her work before as previously Bradley’s photographic pedigree was aligned with contemporary practitioners such as Jeff Wall. However, now, through these drawings, she joins the lineage of photogenic drawing that began with William Henry Fox Talbot and his proclamation of photography as the ‘pencil of nature’ in the 1840s. Indeed Bradley’s light drawings must be recognised for their kinship to the work of notable historic photographers such as Anna Atkins who perfected the cyanotype, and Carlotta Corpron whose photograms explored simple abstraction of forms. Whether this consideration is useful remains to be seen, but it is worth drawing attention to here as previously Bradley’s work might solely have been contextualised within a minimal and conceptual realm, exclusive of concerns about light itself and the very nature of photography. Analysis of context can be narrowed further. Although the new drawings each carry a convincing individual presence, they gather further strength of meaning when exhibited alongside light box works and sculptural panels. In effect they materialise a more direct connection between various facets of Bradley’s work, a strategy that she has not employed quite so explicitly before. Traditional Minimalist demands to negate private expression are challenged more energetically when the drawings are placed in relationship to the other works. Bradley’s multiple use of an ink blot image throughout the drawings is particularly vital in this regard. Inspired by Georges Braque’s ‘Ateliers’ (1949–56), a series of eight studio paintings which depict a bird flying through each image thought to signify creative freedom, Bradley created her own

symbolic mark in the form of an ink blot. Also popularly recognised as a Rorschach – a device used in psychological testing – the blot offers multiple explanations. Whether as a bird, a leaf, a landscape, female genitalia or any other interpretation, its meaning depends solely on the viewer. So while meaning in the drawings is partially deferred it is not completely disavowed. Repetition of the blot acts as a visual pulse, creating a connection between all the drawings and acting as a memory trigger or perhaps, as Christopher Turner eloquently describes, ‘a cardiogram of the unconscious’.5 The appearance of the ink blot in the drawings, a form many are familiar with, could be construed as a generous device that encourages viewers to consider free association in other aspects of Bradley’s work. Alongside the drawings her white panels become open spaces for inquiry; as viewers are confronted with blurred, reflected self-portraits the notion of seeing oneself ‘in’ the sculpture becomes more apparent. Similarly, the reading of text in Bradley’s light box works potentially becomes less esoteric. Viewers may feel more inclined to take on authorship. Where light emitted from light boxes illuminates the face of viewers, by contrast, the drawings absorb light and pull the viewer in. One is seduced into stepping forward into the tantalising space of the assemblages. Somewhere in between, the sculptural panels act as a dynamic, reflective hinterland open to possibilities. To encounter Bradley’s work in this tripartite configuration requires a phenomenological dance between the differing demands of two and three dimensional objects. Importantly, the defining relational factor that draws a thread between all Bradley’s works in this instance is light and its coterie of reflections and shadows. The success resulting from the synthesis described above announces a potential new path for Bradley. Her experiments in light drawing present a fresh element in her studio practice that heralds optimism and excitement about what happens next. With luck, like a plant turned to the sun, light will no doubt continue to nourish Bradley for the next twenty years. Sara-Jayne Parsons, Exhibitions Curator, the Bluecoat

1. Perse, Saint-John. Collected Poems. Princeton University Press, Princeton, 1983. Paraphrase taken from Saint-John Perse’s 1962 poem ‘Oiseaux’ (Birds) where he refers to a symbolic bird motif depicted by Georges Braque in his ‘Ateliers’ series (1949–56). 2. Email to the author, February 17, 2011. 3. In this context, Bradley, like other artists of her generation, challenges the cool aesthetic of a Minimalist style understood as the use and repetition of simple geometric forms, a resistance to showing the hand of the maker, and concern with industrial construction and architectural space. The key intervention she employs is the use of text, often with literary and autobiographical connections. For a thoughtful consideration of a Post-Minimal approach see Lynn Zevelansky’s Sense and Sensibility: Women Artists and Minimalism in the Nineties, New York: Museum of Modern Art, 1994. 4. Email to author, February 17, 2011 5. Turner, Christopher. ‘The Deliberate Accident in Art’, TATE ETC., issue 21, Spring 2011, pp58–65. Airports for the lights, shadows and particles

Airports for the lights, shadows and particles