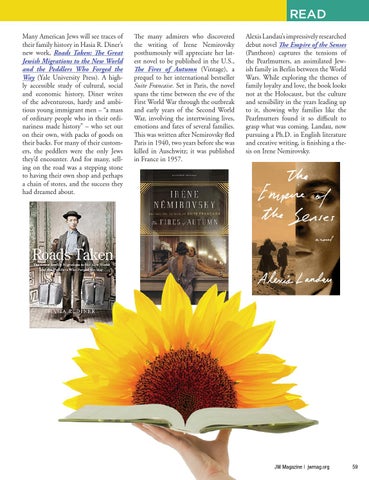 READ Many American Jews will see traces of their family history in Hasia R. Diner’s new work, Roads Taken: The Great Jewish Migrations to the New World and the Peddlers Who Forged the Way (Yale University Press). A highly accessible study of cultural, social and economic history, Diner writes of the adventurous, hardy and ambitious young immigrant men – “a mass of ordinary people who in their ordinariness made history” – who set out on their own, with packs of goods on their backs. For many of their customers, the peddlers were the only Jews they’d encounter. And for many, selling on the road was a stepping stone to having their own shop and perhaps a chain of stores, and the success they had dreamed about.

The many admirers who discovered the writing of Irene Nemirovsky posthumously will appreciate her latest novel to be published in the U.S., The Fires of Autumn (Vintage), a prequel to her international bestseller Suite Francaise. Set in Paris, the novel spans the time between the eve of the First World War through the outbreak and early years of the Second World War, involving the intertwining lives, emotions and fates of several families. This was written after Nemirovsky fled Paris in 1940, two years before she was killed in Auschwitz; it was published in France in 1957.

Alexis Landau’s impressively researched debut novel The Empire of the Senses (Pantheon) captures the tensions of the Pearlmutters, an assimilated Jewish family in Berlin between the World Wars. While exploring the themes of family loyalty and love, the book looks not at the Holocaust, but the culture and sensibility in the years leading up to it, showing why families like the Pearlmutters found it so difficult to grasp what was coming. Landau, now pursuing a Ph.D. in English literature and creative writing, is finishing a thesis on Irene Nemirovsky. 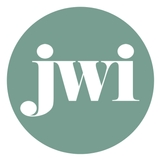