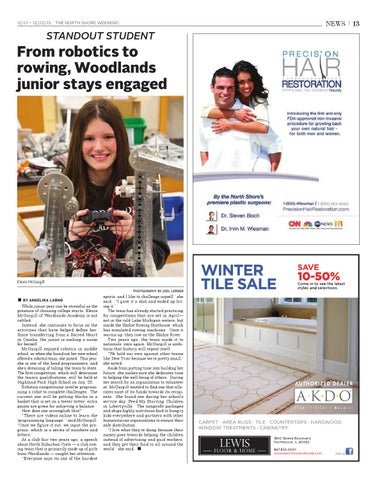 photography by joel lerner ■ by angelika labno While junior year can be stressful as the pressure of choosing college starts, Elexis McGargill of Woodlands Academy is not rattled. Instead, she continues to focus on the activities that have helped define her. Since transferring from a Sacred Heart in Omaha, the junior is making a name for herself. McGargill enjoyed robotics in middle school, so when she found out her new school offered a robotics team, she joined. This year, she is one of the head programmers, and she’s dreaming of taking the team to state. The first competition, which will determine the team’s qualifications, will be held at Highland Park High School on Jan. 25. Robotics competitions involve programming a robot to complete challenges. The current one will be getting blocks in a basket that is set on a teeter-totter; extra points are given for achieving a balance. How does one accomplish this? “There are videos online to learn the ‘programming language,’” said McGargill. “Once we figure it out, we input the program, which is a series of numbers and letters.” At a club fair two years ago, a speech about North Suburban Crew — a club rowing team that is primarily made up of girls from Woodlands — caught her attention. “Everyone says its one of the hardest

sports, and I like to challenge myself,” she said. “I gave it a shot and ended up loving it.” The team has already started practicing for competitions that are set in April— not in the cold Lake Michigan waters, but inside the Skokie Rowing Boathouse, which has simulated rowing machines. Once it warms up, they row on the Skokie River. Two years ago, the team made it to nationals; once again, McGargill is ambitious that history will repeat itself. “We hold our own against other teams like New Trier because we’re pretty small,” she noted. Aside from putting time into building her future, she makes sure she dedicates time to helping the well-being of others. During her search for an organization to volunteer at, McGargill wanted to find one that allocates most of its funds towards its recipients. She found one during her school’s service day: Feed My Starving Children in Libertyville. The nonprofit packages and ships highly nutritious food to hungry kids everywhere and partners with other humanitarian organizations to ensure their safe distribution. “I love what they’re doing because their money goes towards helping the children instead of advertising and paid workers, and they get their food to all around the world,” she said. ■