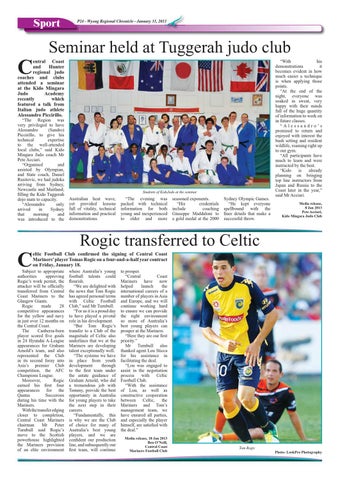 “The Region was very privileged to have Alessandro (Sandro) Piccirillo, to give his technical expertise to the well-attended local clubs,” said Kido Mingara Judo coach Mr Pete Acciari. “Organised and assisted by Olympian, and State coach, Daniel Rusitovic, we had judoka arriving from Sydney, Newcastle and Maitland; filling the Kido Tuggerah dojo mats to capacity. “Alessandro only arrived in Sydney that morning and was introduced to the

Students of KidoJudo at the seminar

seasoned exponents. “His credentials include coaching Giuseppe Maddaloni to a gold medal at the 2000

Sydney Olympic Games. “He kept everyone spellbound with the finer details that make a successful throw.

“With his demonstrations it becomes evident in how much easier a technique is when applying those points. “At the end of the night, everyone was soaked in sweat, very happy with their minds full of the huge quantity of information to work on in future classes. “Alessandro’s promised to return and enjoyed with interest the bush setting and resident wildlife, roaming right up to our gym. “All participants have much to learn and were instructed by the best. “Kido is already planning on bringing top line instructors from Japan and Russia to the Coast later in the year,” said Mr Acciari. Media release, 8 Jan 2013 Pete Acciari, Kido Mingara Judo Club

Subject to appropriate authorities approving Rogic’s work permit, the attacker will be officially transferred from Central Coast Mariners to the Glasgow Giants. Rogic made 28 competitive appearances for the yellow and navy in just over 12 months on the Central Coast. The Canberra-born player scored five goals in 24 Hyundai A-League appearances for Graham Arnold’s team, and also represented the Club in its second foray into Asia’s premier Club competition, the AFC Champions League. Moreover, Rogic earned his first four appearances for the Qantas Socceroos during his time with the Mariners. With the transfer edging closer to completion, Central Coast Mariners chairman Mr Peter Turnbull said Rogic’s move to the Scottish powerhouse highlighted the Mariners provision of an elite environment

where Australia’s young football talents could flourish. “We are delighted with the news that Tom Rogic has agreed personal terms with Celtic Football Club,” said Mr Turnbull. “For us it is a proud day to have played a pivotal role in his development. “But Tom Rogic’s transfer to a Club of the magnitude of Celtic also underlines that we at the Mariners are developing talent exceptionally well. “The systems we have in place from youth development through to the first team under the astute guidance of Graham Arnold, who did a tremendous job with Tommy, provide the best opportunity in Australia for young players to take the next step in their careers. “Fundamentally, this is why we are the Club of choice for many of Australia’s best young players, and we are confident our production line, and subsequently our first team, will continue

to prosper. “Central Coast Mariners have now helped launch the international careers of a number of players in Asia and Europe, and we will continue working hard to ensure we can provide the right environment so more of Australia’s best young players can prosper at the Mariners. “Here they are our first priority.” Mr Turnbull also thanked agent Lou Sticca for his assistance in facilitating the deal. “Lou was engaged to assist in the negotiation process with Celtic Football Club. “With the assistance of Lou, as well as constructive cooperation between Celtic, the Mariners and Tom’s management team, we have ensured all parties, and especially the player himself, are satisfied with the deal.” Media release, 18 Jan 2013 Ben O’Neill, Central Coast Mariners Football Club