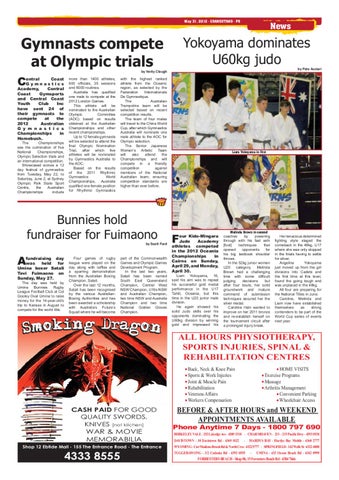 The Championships see the culmination of ﬁve National Championships, Olympic Selection trials and an international competition. Showcased across a 12 day festival of gymnastics from Tuesday, May 22, to Saturday, June 2, at Sydney Olympic Park State Sport Centre, the Australian Championships include

more than 1400 athletes, 600 ofﬁcials, 35 sessions and 6000 routines. Australia has qualiﬁed one male to compete at the 2012 London Games. This athlete will be nominated to the Australian Olympic Committee (AOC) based on results obtained at the Australian Championships and other recent championships. Up to 12 female gymnasts will be selected to attend the ﬁnal Olympic Nomination Trial, after which ﬁve athletes will be nominated by Gymnastics Australia to the AOC. Based on the results of the 2011 Rhythmic Gymnastics World Championships, Australia qualiﬁed one female position for Rhythmic Gymnastics

with the highest ranked athlete from the Oceanic region, as selected by the Federation Internationale De Gymnastique. The Australian Trampoline team will be selected based on recent competition results. The team of four males will travel to the China World Cup, after which Gymnastics Australia will nominate one male athlete to the AOC for Olympic selection. The Senior Japanese Women’s Artistic Team will also attend the Championships and will compete in a friendly competition against members of the National Australian team; ensuring competition standards are higher than ever before.

fundraising day was held for Umina boxer Satali Tevi Fuimaono on Sunday, May 27.

The day was held by Umina Bunnies Rugby League Football Club at Col Gooley Oval Umina to raise money for the 14-year-old’s trip to Kansas in August to compete for the world title.

Four games of rugby league were played on the day along with rafﬂes and a sparring demonstration from the Australian Boxing Champion, Satali. Over the last 12 months, Satali has been recognised by the various AustralianBoxing Authorities and has been awarded a scholarship with Australia’s Future’s Squad where he will become

our Kido-Mingara Judo Academy athletes competed in the 2012 Oceania Championships in Cairns on Sunday, April 29, and Monday, April 30.

Liam Yokoyama, 16, said his aim was to repeat his successful gold medal performance in the U17 Tahiti, Oceania, but this time in the U20 junior male division. He again showed his solid Judo skills over his opponents dominating the U60kg division by winning gold and impressed his

Melinda Brown in second coaches by powering through with his fast ashi [foot] techniques that opened opponents for his big textbook shoulder throws. In the 52kg junior women U20 category, Melinda Brown had a challenging time with some difﬁcult judging decisions but after four bouts, her solid groundwork and mature command of submission techniques secured her the silver medal. Caroline Hain wanted to improve on her 2011 bronze and re-establish herself on the tournament circuit after a prolonged injury break.

Her tenacious determined ﬁghting style staged the comeback in the 48kg, U17 where she was only stopped in the ﬁnals having to settle for silver. Angelina Yokoyama just moved up from the girl divisions into Cadets and the ﬁrst time at this level, found the going tough and was unplaced in the 48kg. All four are preparing for the National Titles in June. Caroline, Melinda and Liam now have established themselves as strong contenders to be part of the World Cup series of events next year.