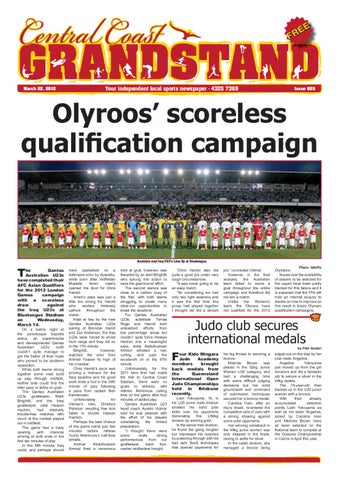 Australia and Iraq U23&#39;s Line Up at Bluetongue

he Qantas Australian U23s have completed their AFC Asian Qualiﬁers for the 2012 London Games campaign with a scoreless draw against the Iraq U23s at Bluetongue Stadium on Wednesday, March 14.

On a balmy night at the picturesque bayside arena, an experimental and developmental Qantas Australian U23s outﬁt couldn’t quite manage to get the better of their rivals who proved to be stubborn opposition. While both teams strung together some neat build up play through midﬁeld, neither side could ﬁnd the killer pass or strike on goal. The Qantas Australian U23s goalkeeper, Mark Birighitti, and the Iraqi goalkeeper, Jalal Hassan Hachim, had relatively trouble-free matches with much of the contest played out in midﬁeld. The game had a lively opening with chances arriving at both ends in the ﬁrst ten minutes of play. In the ﬁfth minute, Iraq could, and perhaps should

have capitalised on a defensive error by Australia, while soon after midﬁelder Mustafa Amini nearly opened the door for Chris Harold. Amini’s pass was just a little too strong for Harold who worked tirelessly upfront throughout the match. Kept at bay by the new Qantas Australian U23s pairing of Brendan Hamill and Zac Anderson, the Iraq U23s were forced to shoot from range and they did so in the 17th minute. Birighitti, however, watched the shot from Ahmed Yaseen ﬂy high of his crossbar. Chris Harold’s pace was proving a menace for the Iraqi backline and his good work drew a foul in the 36th minute of play following a pass from captain Ben Kantarovski. Unfortunately for Vidmar’s men, Dimitrios Petratos’ resulting free kick failed to trouble Hassan Hachim. Perhaps the best chance of the game came just two minutes before referee Yuichi Nishimura’s half-time whistle. Ammar Abdulhussein Ahmed ﬁred a venomous

shot at goal, however, was thwarted by an alert Birighitti who sprung into action to save the goal bound effort. The second stanza was close to a carbon copy of the ﬁrst, with both teams struggling to create many clear-cut opportunities to break the deadlock. For Qantas Australian U23s, substitute Tomas Rogic and Harold both unleashed efforts from low percentage areas but couldn’t quite force Hassan Hachim into a meaningful save, while Abdulhussein Ahmed whisked a low, curling shot past the woodwork on in the 67th minute. Unfortunately for the 2071 fans that had made the trek to Central Coast Stadium, there were no goals to witness, with referee Nishimura calling time on the game after four minutes of added play. Qantas Australian U23 head coach Aurelio Vidmar said he was pleased with the effort of his players considering the limited preparation. “I thought there were some really strong performances from our goalkeeper, back four, central midﬁelders tonight.

“Chris Harold also did quite a good job under very tough circumstances. “It was never going to be an easy match. “So considering we had only two light sessions and it was the ﬁrst time this group had played together I thought we did a decent

job,” concluded Vidmar. However, in the ﬁnal analysis, the Australian team failed to score a goal throughout the entire campaign and therefore did not win a match. Unlike the Women’s team, the Olyroos have not qualiﬁed for the 2012

Olympics. Issues over the availability of players to be selected for the squad have been partly blamed for this failure and it is expected that the FFA will hold an internal enquiry to decide on how to improve on this result in future Olympic qualiﬁcation campaigns.

Liam Yokoyama, 16, in his U20 junior male division showed his solid judo skills over his opponents dominating the U60kg division by winning gold. In the senior men division, he found the going tougher but impressed his coaches by powering through with his fast ashi [foot] techniques that opened opponents for

his big throws to securing a bronze. Melinda Brown was placed in the 52kg Junior Women U20 category, and had a challenging time with some difﬁcult judging decisions but her solid groundwork and command of submission techniques secured her a bronze medal. Caroline Hain, after an injury break, re-entered the competition side of Judo with a strong showing against some solid opponents. Her winning comeback in the 48kg junior women was only stopped in the ﬁnals, having to settle for silver. In the cadet division, she managed a bronze being

edged out on the diaz by her club mate, Angelina. Angelina Yokoyama just moved up from the girl divisions and did a fantastic job to secure a silver in the 48kg cadets. The 15-year-old then backed up in the U20 junior women with a bronze. With their already accumulated selection points Liam Yokoyama as well as his sister Angelina, joined by Caroline Hain and Melinda Brown have all been selected on the National team to compete at the Oceania Championship in Cairns in April this year. 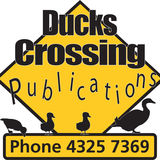