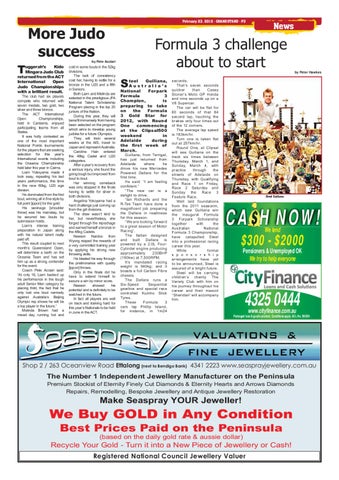 Formula 3 challenge about to start

The club had six players compete who returned with seven medals, two gold, two silver and three bronze. The ACT International Open Championships, held in Canberra, enjoyed participating teams from all States. It was hotly contested as one of the most important National Points tournaments for the players that are seeking selection for this year’s International events including the Oceania Championship held later this year in Cairns. Liam Yokoyama made it look easy, repeating his last years performance, this time in the new 60kg, U20 age division. He dominated from the ﬁrst bout, winning all in ﬁne style by full point [ippon] for the gold. His seoinage [shoulder throw] was his mainstay, but he secured two bouts by submission holds. Liam’s intense training preparation in Japan along with his natural talent really paid off. This result coupled to next month’s Queensland Open, will determine a berth on the Oceania Team and has set him up as a strong contender for the event. Coach Pete Acciari said: “At only 16, Liam backed up his performance in the tough adult Senior Men category by placing third, the fact that he only lost one bout narrowly against Australia’s Beijing Olympic rep shows he will be a top player in the future.” Melinda Brown had a mixed day, running hot and

cold in some bouts in the 52kg divisions. The lack of consistency cost her, having to settle for a bronze in the U20 and a ﬁfth in Seniors. Both Liam and Melinda are selected in the prestigious JFA National Talent Scholarship Program placing in the top 20 juniors of the Nation. During this year, they will beneﬁt immensely from having been selected on the program which aims to develop young judoka for a future Olympics. They will train several weeks at the AIS, travel to Japan and represent Australia. Caroline Hain entered the 48kg Cadet and U20 categories. After a year’s recovery from a serious injury, she found the going tough but improved from bout to bout. Her winning comeback was only stopped in the ﬁnals having to settle for silver in both divisions. Angelina Yokoyama had a hard challenge just coming up from the girl divisions. The draw wasn’t kind to her, but nevertheless, she forged through the repechage and earned herself a bronze in the 48kg Cadets. Neeson Naidoo from Wyong reaped the rewards of a very committed training year by applying his strong new throwing skills. He blasted his way through the preliminaries with quality [ippon] throws. Only in the ﬁnals did he have to extend himself to secure a win by minor score. Neeson showed his potential and is deﬁnitely to be watched in the future. In fact all players are well on track and training hard for this year’s Nationals to be held in June in the ACT.

teel Guiliana, Australia’s National Forpark Formula 3 Champion, is preparing to take on the Formula 3 Gold Star for 2012, with Round One commencing at the Clipsal500 weekend in Adelaide during the first week of March.

Guiliana, from Terrigal, has just returned from Adelaide where he drove his new Mercedes Powered Dallara for the first time. He said: “I am feeling confident.” “The new car is a delight to drive. “Ian Richards and the R-Tek Team have done a magnificent job preparing the Dallara in readiness for this season. “We are looking forward to a great season of Motor Racing”. The Italian designed and built Dallara is powered by a 2.0L FourCylinder engine producing approximately 230BHP (190kw) at 7,500RPM. It’s mandated racing weight is 540kg; and it boasts a full Carbon Fibre chassis. The Dallara runs a Six-Speed Sequential gearbox and special race controlled Kumho Slick Tyres. These Formula 3 cars lap Phillip Island, for instance, in 1m24

seconds. That’s seven seconds quicker than Casey Stoner’s Moto GP Honda and nine seconds up on a V8 Supercar. The car will be flat for 60 seconds of that 84 second lap, touching the brakes only four times out of the 12 corners. The average lap speed is 183km/hr. Turn one is taken flat out at 257km/hr. Round One, at Clipsal will see Guiliana on the track six times between Thursday, March 1, and Sunday, March 4, with practice through the streets of Adelaide on Thursday, with Qualifying and Race 1 on Friday, Race 2 Saturday and Sunday the Race 3 Feature Race. Well laid foundations from the 2011 seasonm, which saw Guiliana win the inaugural Formula 3 Forpark Scholarship together with the Australian National Formula 3 Championship, have catapulted Steel into a professional racing career this year. While formal s p o n s o r s h i p arrangements have yet to be announced, Steel is assured of a bright future. Steel will be carrying children’s charity The Variety Club with him on his journey throughout his career and their mascot “Sheridan” will accompany him.

Recycle Your Gold - Turn it into a New Piece of Jewellery or Cash! Registered National Council Jewellery Valuer