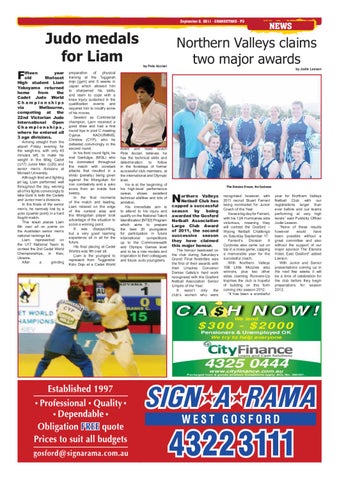 Arriving straight from the airport Friday evening for the weigh-ins, with only 45 minutes left, to make his weight in the 66kg Cadet (U17) Junior Men (U20) and senior men’s divisions at Monash University. Although tired and ﬁghting jet lag, Liam performed well throughout the day, winning all of his ﬁghts convincingly to take Gold in both the Cadets and Junior men’s divisions. In the ﬁnals of the senior men’s, he narrowly lost by a yuko (quarter point) in a hard fought match. This result places Liam 6th over all on points on the Australian senior men’s national rankings list. Liam represented on the U17 National Team to contest the 2nd Cadet World Championships, in Kiev, Ukraine. After a grinding

preparation of physical training at the Tuggerah dojo [gym] and 5 weeks in Japan which allowed him to sharpened his skills, and learn to cope with a knee injury sustained in the qualiﬁcation events and required him to modify some of his moves. Seeded as Continental champion, Liam received a good draw and had a ﬁrst round bye in pool C meeting Cyprus KAOURANIS, Christos (CYP), who he defeated convincingly in the second round. In his third round ﬁght, he met Gantulga, (MGL) who he dominated throughout the match with constant attacks that resulted in a shido (penalty) being given against the Mongolian for non combativity and a yuko score from an inside foot sweep. In the ﬁnal moments of the match and leading, Liam relaxed on the edge of the contest area and the Mongolian player took advantage of the situation to score a winning point. It was disappointing, but a very good learning experience all in all for the future. His ﬁnal placing at Cadet Worlds was 9th over all. Liam is the youngest to represent from Tuggerahs’ Kido Dojo at a Cadet World

event and head coach Pete Acciari believes he has the technical skills and determination to follow in the footsteps of former successful club members, at the international and Olympic level. He is at the beginning of his high-level performance career, shows excellent technical abilities and lots of ambition. His immediate aim is to attend to his injury and qualify on the National Talent Identiﬁcation [NTID] Program which aims to prepare the best 20 youngsters for participation in future international competitions up to the Commonwealth and Olympic Games level and to be a role models and inspiration to their colleagues and future Judo youngsters.

The Division 6 team, the Cyclones

orthern Valleys Netball Club has capped a successful season by being awarded the Gosford Netball Association Large Club Award of 2011, the second successive season they have claimed this major honour.

The honour bestowed on the club during Saturday’s Grand Final festivities was the ﬁrst of their awards with their Umpires Convenor Denise Gately’s hard work recognised with the Gosford Netball Association Senior Umpire of the Year. It wasn’t only the club’s women who were

recognised however, with 2011 recruit Stuart Farrant being nominated for Junior Coach of the Year. It was a big day for Farrant, with his 12A Hurricanes side victorious, meaning they will contest the Gosford – Wyong Netball Challenge on Saturday September 17. Farrant’s Division 6 Cyclones also came out on top in a close game, capping a memorable year for the successful coach. With Northern Valleys 10B Little Mozzies also winners, plus two other sides claiming Runners-Up trophies the club is hopeful of building on this form coming into season 2012. “It has been a wonderful

year for Northern Valleys Netball Club with our registrations larger than ever before and our teams performing at very high levels” said Publicity Ofﬁcer Jodie Leeson. “None of these results however would have been possible without a great committee and also without the support of our major sponsor The Elanora Hotel, East Gosford” added Leeson. With Junior and Senior presentations coming up in the next few weeks it will be a time of celebration for the club before they begin preparations for season 2012.