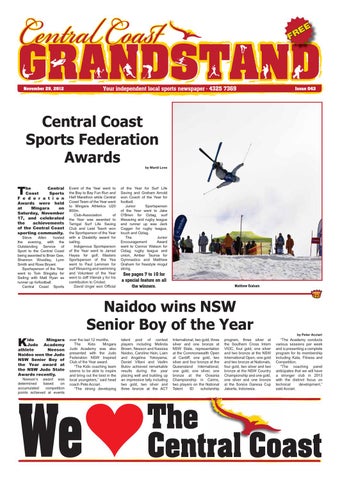 he Central Coast Sports F e d e r a t i o n Awards were held at Mingara on Saturday, November 17, and celebrated the achievements of the Central Coast sporting community.

Steve Allen hosted the evening, with the Outstanding Service of Sport to the Central Coast being awarded to Brian Gee, Shannon Woodley, Lynn Smith and Ross Bryant. Sportsperson of the Year went to Tom Slingsby for Sailing with Matt Ryan as runner up forfootball. Central Coast Sports

See pages 7 to 10 for a special feature on all the winners.

over the last 12 months. The Kido Mingara Judo Academy was also presented with the Judo Federation NSW Inspired Club of the Year award. “The Kido coaching team seems to be able to inspire and bring out the best in the local youngsters,” said head coach Pete Acciari. “The strong developing

“The Academy conducts various sessions per week and is presenting a complete program for its membership including Kata, Fitness and Competition. “The coaching panel anticipates that we will have a stronger club in 2013 with the distinct focus on technical development,” said Acciari.