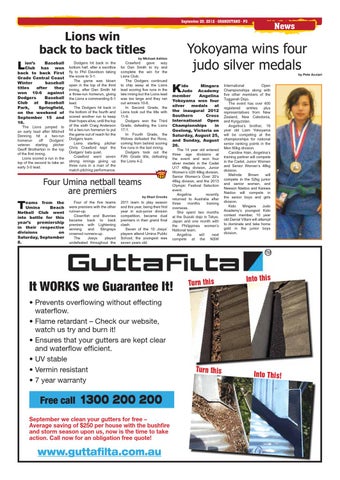 Lions win back to back titles

ion’s Baseball Club has won back to back First Grade Central Coast Winter baseball titles after they won 10-6 against Dodgers Baseball Club at Baseball Park, Springfield, on the weekend of September 15 and 16.

Dodgers hit back in the bottom half, after a sacrifice fly to Phil Davidson taking the score to 3-1. The game was blown open in the top of the third inning, after Dan Smith hit a three-run homerun, giving the Lions a commanding 6-1 lead. The Dodgers hit back in the bottom of the fourth and scored another run to keep their hopes alive, until the top of the sixth Craig Anderson hit a two-run homerun to put the game out of reach for the Dodgers team. Lions starting pitcher Chris Crawford kept the Dodgers’ bats quiet. Crawford went seven strong innings giving up three runs in a man of the match pitching performance.

Crawford gave way for Dan Smith to try and complete the win for the Lions Club. The Dodgers continued to chip away at the Lions lead scoring five runs in the late inning but the Lions lead was too large and they ran out winners 10-6. In Second Grade, the Lions took out the title with 11-9. Dodgers won the Third Grade, defeating the Lions 17-1. In Fourth Grade, the Wolves defeated the Roos, coming from behind scoring five runs in the last inning. Dodgers took out the Fifth Grade title, defeating the Lions 4-2.

Four Umina netball teams are premiers eams from the Umina Beach Netball Club went into battle for this year’s premiership in their respective divisions on Saturday, September 8.

Four of the five teams were premiers with the other runner-up. Clownfish and Bunnies became back to back premiers with Lightening winning and Stingrays crowned runners-up. The Joeys played undefeated throughout the

2011 learn to play season and this year, being their first year in sub-junior division competition, became dual premiers in their grand final clash. Seven of the 10 Joeys’ players attend Umina Public School; the youngest was seven years old.

The 14 year old entered three age divisions at the event and won four silver medals in the Cadet U17 48kg division, Junior Women’s U20 48kg division, Senior Women’s Over 20’s 48kg division, and the 2013 Olympic Festival Selection event. Angelina recently returned to Australia after three months training overseas. She spent two months at the Suzuki dojo in Tokyo, Japan and one month with the Philippines women’s National team. Angelina will next compete at the NSW

It WORKS we Guarantee It! • Prevents overflowing without effecting waterflow. • Flame retardant – Check our website, watch us try and burn it! • Ensures that your gutters are kept clear and waterflow efficient. • UV stable • Vermin resistant • 7 year warranty

September we clean your gutters for free – Average saving of $250 per house with the bushfire and storm season upon us, now is the time to take action. Call now for an obligation free quote!

International Open Championships along with five other members of the Tuggerah Dojo. The event has over 400 registered entries plus representatives from New Zealand, New Caledonia, and Kyrgyzstan. Angelina’s brother, 16 year old Liam Yokoyama will be competing at the championships for national senior ranking points in the Men 60kg division. Caroline Hain, Angelina’s training partner will compete in the Cadet, Junior Women and Senior Women’s 48kg division. Melinda Brown will compete in the 52kg junior and senior women, and Neeson Naidoo and Kaisiea Naidoo will compete in the senior boys and girls division. Kido Mingara Judo Academy’s youngest Kido contest member, 10 year old Danial Villani will attempt to dominate and take home gold in the junior boys division.