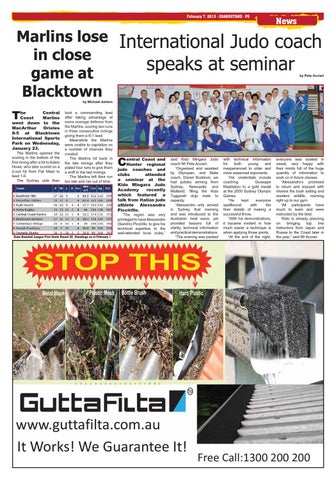 he Central Coast Marlins went down to the MacArthur Orioles 8-5 at Blacktown International Sports Park on Wednesday, January 23.

The Marlins opened the scoring in the bottom of the first inning after a hit to Adam Howe, who later scored on a 2-out hit from Pat Maat to lead 1-0. The Sydney side then

took a commanding lead after taking advantage of some average defence from the Marlins, scoring two runs in three consecutive innings giving them a 6-1 lead. Meanwhile the Marlins were unable to capitalize on a number of chances they created. The Marlins hit back in the late innings after they plated four runs to give them a sniff in the last innings. The Marlins left their run too late and ran out of time.

“The region was very privileged to have Alessandro (Sandro) Piccirillo, to give his technical expertise to the well-attended local clubs,” State Baseball League First Grade Round 32. Standings as of February 1

said Kido Mingara Judo coach Mr Pete Acciari. “Organised and assisted by Olympian, and State coach, Daniel Rusitovic, we had judoka arriving from Sydney, Newcastle and Maitland; filling the Kido Tuggerah dojo mats to capacity. “Alessandro only arrived in Sydney that morning and was introduced to the Australian heat wave, yet provided lessons full of vitality, technical information and practical demonstrations. “The evening was packed

www.guttafilta.com.au It Works! We Guarantee It!

with technical information for both young and inexperienced to older and more seasoned exponents. “His credentials include coaching Giuseppe Maddaloni to a gold medal at the 2000 Sydney Olympic Games. “He kept everyone spellbound with the finer details of making a successful throw. “With his demonstrations, it became evident in how much easier a technique is when applying those points. “At the end of the night,

everyone was soaked in sweat, very happy with their minds full of the huge quantity of information to work on in future classes. “Alessandro’s promised to return and enjoyed with interest the bush setting and resident wildlife, roaming right up to our gym. “All participants have much to learn and were instructed by the best. “Kido is already planning on bringing top line instructors from Japan and Russia to the Coast later in the year,” said Mr Acciari.