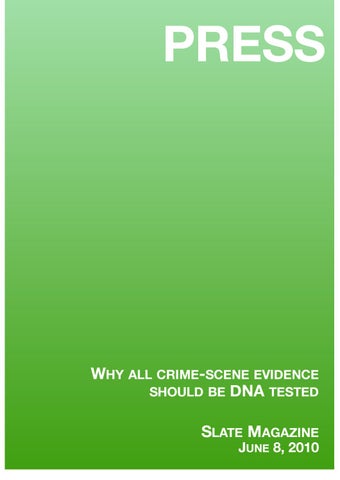 WHY ALL CRIME-SCENE EVIDENCE SHOULD BE DNA TESTED SLATE MAGAZINEâ&amp;#x20AC;¨ JUNE 8, 2010

Certain Knowledge Why all crime-scene evidence should be DNA tested By Radley Balko for Slate Magazine Tuesday, June 8, 2010 The state of Texas was 47 minutes from executing Henry &quot;Hank&quot; Skinner in March when Justice Antonin Scalia gave him a last-minute stay. Last month, the Supreme Court as a whole agreed to hear Skinner&#39;s case in the fall. At issue is whether Skinner should be given access to crime-scene evidence and DNA testing that he and his lawyers say will prove his innocence. However the court comes out, Skinner&#39;s case raises a fundamental question about how police and district attorneys investigate and prosecute crimes: Why wasn&#39;t this evidence tested before Skinner&#39;s trial? And why hasn&#39;t it been tested since? The answers lie in the adversarial nature of our criminal justice system. There are times when neither the prosecution nor the defense is particularly interested in discovering the truth. That&#39;s where policy makers need to step in. In cases like Skinner&#39;s, they should establish a common-sense rule: When there is biological evidence at the crime scene, all of that evidence should be sent for DNA testing. No exceptions. The details of Hank Skinner&#39;s case illustrate both the problem and how such a rule would solve it. Skinner was convicted in 1995 for the 1993 murders of his girlfriend Twila Busby and her two adult sons. Skinner doesn&#39;t dispute that he was in the house when his girlfriend and her sons were murdered. He claims he was unconscious at the time, knocked out by a near-lethal mix of alcohol and codeine. Back in 1995, the evidence against him seemed formidable. He was present at the crime scene. He had smears of blood from two of the three victims on his shirt. Andrea Reed, Skinner&#39;s neighbor and ex-girlfriend, says Skinner came to her home shortly after the crime and first implicated himself, then told Reed a number of other implausible and contradictory stories about who committed the murders. But Skinner has always maintained his innocence. In 1999, Northwestern University&#39;s Medill Innocence Project began looking into Skinner&#39;s conviction. As professor David Protess and his student journalists began interviewing witnesses and reviewing evidence, the state&#39;s case against Skinner started to unravel. Reed recanted her testimony and now says she was pressured by police investigators to implicate Skinner. Toxicology reports showed the amount of codeine and alcohol in Skinner&#39;s blood at the time of the murders would have likely have rendered him unconscious or put him in a hazy stupor. His defenders say he couldn&#39;t have killed three adults in that condition. The students also found that Busby had been stalked by an allegedly lecherous uncle named Robert Donnell, whom witnesses said had approached her at a party the night of her death. She left frightened, and he appeared to have followed her. Friends say Donnell had raped Busby in the recent past. Days after the murders, a neighbor saw Donnell cleaning and repainting his truck. There are other problems with Skinner&#39;s conviction. His court-appointed attorney, Harold Lee Comer, was a disgraced former prosecutor who left office after pleading guilty to siphoning off asset forfeiture funds in a drug case. The judge, a friend of Comer&#39;s, appointed him to represent Skinner, then ordered Comer&#39;s pay in an amount roughly equal to what Comer still owed for his own criminal conduct. Worse, Comer had previously prosecuted Skinner on a minor assault and theft charge. At Skinner&#39;s sentencing trial, the prosecution argued that those two crimes were aggravating factors that should be considered in Skinner&#39;s sentencing. Comer didn&#39;t object. Most of these flaws have been litigated, and the courts have found that none of them is enough to win Skinner a new trial. But the most troubling aspect of Skinner&#39;s case is the biological material collected from the crime scene. Law enforcement officials tested the small blood smears on Skinner&#39;s shirt, and those matched two of the three victims. But given that Skinner admits he was at the crime scene and says he awoke to find the victims&#39; bodies, it isn&#39;t surprising that he&#39;d have some of their blood on his shirt. The blood on the murder weapons has never been DNA tested. Nor has any material from the rape kit taken from Busby. The state also never tested skin cells taken from under Busby&#39;s fingernails, or a blood-stained windbreaker left at the scene that witnesses say matched one often worn by Donnell. &quot;They only tested the material they thought would implicate Skinner,&quot; Protess told me via phone. &quot;They fixated on their suspect, and once they thought they had enough for a conviction, they stopped.&quot;

Actually, it&#39;s worse than that. In 2000, on an episode of the Nancy Grace Show, Protess publicly challenged Skinner&#39;s prosecutor to test the remaining biological evidence, even offering to pay for the testing himself. &quot;He agreed, and I actually sent him an e-mail complimenting him,&quot; Protess says. But when mitochondrial DNA testing of the hair Busby was clutching in her hand at the time of her death didn&#39;t match Busby or Skinner, the state halted the testing of any more evidence and has refused to run any tests since. As Skinner&#39;s execution neared in March, Texas Gov. Perry again declined to grant Skinner a stay so the evidence could be tested, even after a lab in Arizona offered to conduct the tests for free. Never mind that all of this comes amid continuing controversy over Texas&#39; 2004 execution of Cameron Todd Willingham, a man many believe was innocent, as well as allegations that Texas Gov. Rick Perry subsequently undermined an investigation into the dubious forensic evidence used at Willingham&#39;s trial. For the prosecution, refusing to test the crime scene evidence is about establishing finality and closure, regardless of justice. But Skinner&#39;s defense counsel wasn&#39;t interested in discovering the truth either. At trial, Skinner could have asked for DNA testing of the remaining evidence. Skinner actually told his attorney Comer, in writing, that he wanted the tests. But Comer declined on his behalf. Comer says he feared the test would have confirmed Skinner&#39;s guilt. That&#39;s possible, Comer&#39;s shortcomings aside. Criminal defense attorneys often represent guilty people, and they wouldn&#39;t be doing their jobs if they allowed for testing that may confirm a client&#39;s guilt. Of course, Comer also seems to have been incompetent. But Skinner&#39;s request for the tests doesn&#39;t mean his attorney would have been obligated to ask for them. Nor does Skinner have a constitutional right of due process to DNA testing following conviction. In a case last year, the Supreme Court rejected exactly this proposition, and so Skinner is asking the court to revisit the question under federal civil rights law. In District Attorney&#39;s Office for the 3rd Judicial District v. Osborne, last year&#39;s case, Justice Alito argued in a concurring opinion that guilty people could refuse to request DNA testing at trial, then prolong the appeal process (and stave off execution) by requesting DNA testing afterward. To find a right to post-conviction testing in the Constitution&#39;s protection of due process, Justice Samuel Alito wrote in his concurrence, &quot;would allow prisoners to play games with the criminal justice system.&quot; That&#39;s precisely why the testing should be done before trial. Arguing over which evidence gets tested shouldn&#39;t be part of either side&#39;s strategy. The prosecution and the defense should begin knowing that all of the evidence has been tested or will be. For old cases like Skinner&#39;s, if there&#39;s significant doubt about the defendant&#39;s guilt that testing could resolve, legislators shouldn&#39;t wait for the courtsâ&amp;#x20AC;&amp;#x201D;they should make sure themselves that testing is done. A typical DNA sample costs about $1,000 to analyze, with a usual turnaround time of about 30 days. Innocence Project spokesman Eric Ferrero told me that his organization on average pays about $8,500 per case for DNA testing, since most cases have multiple samples of evidence. No less a death penalty supporter than George W. Bush said in 2000, when he was governor of Texas, &quot;Any time DNA evidence can be used in its context and be relevant as to the guilt or innocence of a person on death row, we need to use it.&quot; Bush then granted a stay of execution to accused killer Rickey Nolen McGinn to allow for such testing. It confirmed McGinn&#39;s guilt. Did McGinn game the system to buy extra time? Probably. Does it matter? McGinn got an extra month of life. Everyone else in Texas got certainty that the state didn&#39;t execute an innocent personâ&amp;#x20AC;&amp;#x201D;and that the actual killer wasn&#39;t still running free. DNA testing may well confirm Hank Skinner&#39;s guilt, too. But the incriminating DNA may also match Robert Donnell (or someone else). In which case Skinner would become the 252ndperson to be exonerated by DNA. Either way, we&#39;d know. By refusing to answer the question, Texas officials are acting as if preserving a conviction is more important than knowing for certain who killed Twila Busby and her sons. Radley Balko is a senior editor for Reason magazine. Article URL: http://www.slate.com/id/2256188/

Why all crime-scene evidence should be DNA tested - Slate Magazine 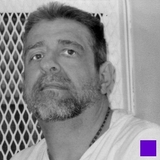