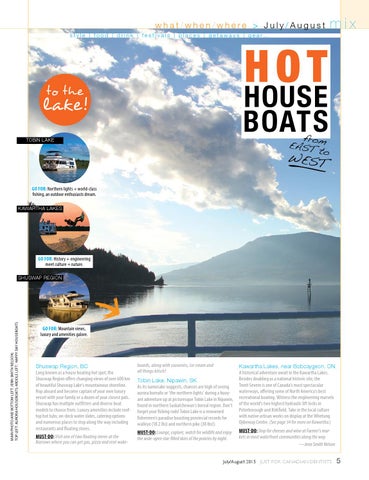 Shuswap Region, BC Long known as a house boating hot spot, the Shuswap Region offers changing views of over 600 km of beautiful Shuswap Lake’s mountainous shoreline. Hop aboard and become captain of your own luxury vessel with your family or a dozen of your closest pals. Shuswap has multiple outfitters and diverse boat models to choose from. Luxury amenities include rooftop hot tubs; on-deck water slides, catering options and numerous places to stop along the way including restaurants and floating stores. must-do: Visit one of twofloatingstores at the Narrows where you canget gas, pizzaandrent wake-

Kawartha Lakes, near Bobcaygeon, ON A historical adventure await in the Kawartha Lakes. Besides doubling as a national historic site, the Trent-Severn is one of Canada’s most spectacular waterways, offering some of North America’s best recreational boating. Witness the engineering marvels of the world’s two highest hydraulic lift locks in Peterborough and Kirkfield. Take in the local culture with native artisan works on display at the Whetung Ojibeway Centre. (See page 34 for more on Kawartha.) must-do: Stop for cheeses and wine at Farmer’s markets in most waterfront communities along the way. —Jenn Smith Nelson 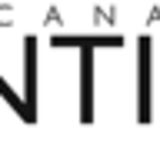