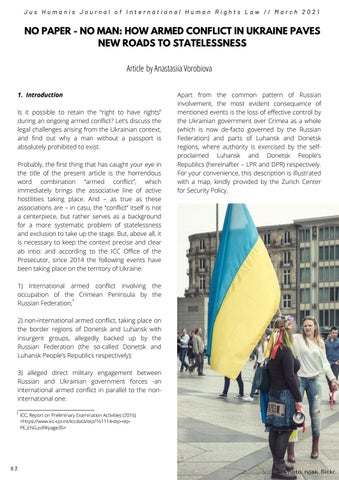 NO PAPER - NO MAN: HOW ARMED CONFLICT IN UKRAINE PAVES NEW ROADS TO STATELESSNESS Article by Anastasiia Vorobiova 1. Introduction Is it possible to retain the “right to have rights” during an ongoing armed conflict? Let’s discuss the legal challenges arising from the Ukrainian context, and find out why a man without a passport is absolutely prohibited to exist. Probably, the first thing that has caught your eye in the title of the present article is the horrendous word combination “armed conflict”, which immediately brings the associative line of active hostilities taking place. And – as true as these associations are – in casu, the “conflict” itself is not a centerpiece, but rather serves as a background for a more systematic problem of statelessness and exclusion to take up the stage. But, above all, it is necessary to keep the context precise and clear ab intio: and according to the ICC Office of the Prosecutor, since 2014 the following events have been taking place on the territory of Ukraine:

Apart from the common pattern of Russian involvement, the most evident consequence of mentioned events is the loss of effective control by the Ukrainian government over Crimea as a whole (which is now de-facto governed by the Russian Federation) and parts of Luhansk and Donetsk regions, where authority is exercised by the selfproclaimed Luhansk and Donetsk People’s Republics (hereinafter – LPR and DPR) respectively. For your convenience, this description is illustrated with a map, kindly provided by the Zurich Center for Security Policy.

Over the world, bustling migration movements, especially the tragedies referred to as ”migration crisis” are driven by globalization, resource-scarcity, economic inequality and armed conflicts. Migrant in such movements travel around for many reasons, ranging from refugees, trafficked victims to economic workers and their families. The situation calls for special attention on rights protection in the migration field more than ever. 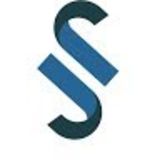