SuperCostel - The Amazing Life Stories of a Regular Guy 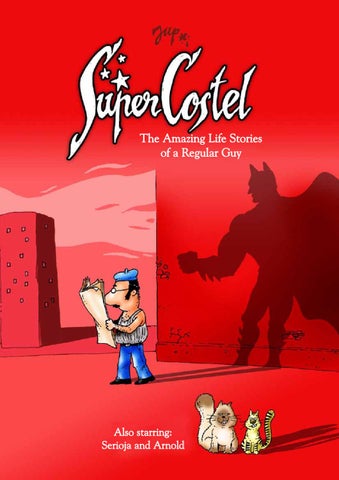 The Amazing Life Stories of a Regular Guy

Story and drawings by

That’s How It All Started

When I first meet him, small and helpless, I wouldn’t know how much he will change my life.

I asked him if he wants to go home with me, and he delicately answered: “Meow”.

I called him “Serioja” because by his accent I suspected he might have some Siberian origins.

I assumed that meant “Yes”.

He grew up fast.

Soon, his kitty-cuteness started to turn into the harsh manners of a stray cat.

… that will take place in a tree, just outside our building. So, Serioja, looks like you’re going to a masked party…

Very interesting mask. Did you make it all by yourself?

Sir, I am representing a international cheesemaking company, and I was hoping maybe you will like to taste from our large selection of free samples.

I’m embarrassed how many times I’ve used this trick… I tried once with detergents, but it didn’t worked.

Although a modernist, Serioja was trying to respect the unwrited laws of his kin. You don’t understand what I’m doing?

You see, in the book of feline behaviour, on chapter 3, paragrah 7 it states: “After catching a mouse, the cat must play a while with her prey”.

… and because it doesn’t specify what kind of game, I choose poker

After all, they don’t need all that money.

Kind-hearted, Serioja will not hesitate to give a good advice.. And after that, I will throw a pie in your face, I’ll put dynamite in your pocket and I’ll turn your moustache into a mandolyn.

Sorry to interrupt, but I want to give you a good piece of advice:

Those Tom &amp; Jerry cartoons will distort the image that you’re supposed to have about the real world.

“Dear Costel, I cannot live anymore in a world were the ozone layer it’s getting thinner every day…”

Hm, That’s strange – Gelu, my goldfish it’s not in his tank anymore… Goody, a letter..

Also fishes were not felling very happy when he was around.

“… I will swallow a handfull of pils and then I’ll trow myself out of the window. Please forgive me,

Usually, Serioja was a good roommate, but he did have some disturbing habits.

Is he nuts or what? Maybe he needs glasses, because I hear him keep hitting the walls.

Some people are condemned to make the same mistakes all over again. That’s my case too.

Look, Serioja, I bought a new goldfish. If he also “mysteriously” commits suicide, you’ll get in trouble, mister.

The Police came by and arrested him. Apparently, he was the mastermind of an international human flesh trafficking

Mmm, I cannot say “flesh” without getting hungry

Costel, what are you trying to do? Now hold on, Costel…

If we were faithful to the proportions of his agenda, every shortstory it should be followed by six pages of:

Time Out for a second.

Stop right there, Costel, and before you’re saying something just listen to my version

All these fast-happening stories might be fooled you into believe that Serioja it’s an hyperactive tomcat. It’s not quite like that.

..and then another four pages of:

What else should be said about Serioja? Maybe only that he is very vengeful.

Once, some of mister’s Jup drawings fell into his paws, and didn’t quite like very much what he saw.

Here are some revolting innuendos on my behalf. Look, man, Gelu killed himself FOR REAL!

Now hold on, man. What is he trying to say with this?

He kept that in his mind, and then waited for the right moment.

One day, when Mister Jup was just walking around in his comic-strip, trying to figure out what else it has to be drawn…

So he won’t be able to draw cartoons for a while.

But why the legs?

he slammed over his legs with a basesball bat!

Coming soon: The next two chapters! (translation in progres)

SuperCostel - The Amazing Life Stories of a Regular Guy

The first volume of the SuperCostel saga. Story and drawings by Jup. The amazing life of the famous TomcatMan!!!