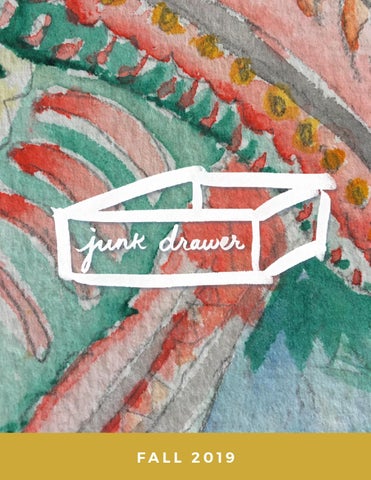 to both showcase what artists can produce when baited and to praise the tangential nature of creativity.

We are so inspired by the contributorsâ&amp;#x20AC;&amp;#x2122; interpretations of these prompts and hope that their work encourages readers to create something of their own. Feel very free to check the prompts at the end of each issue and send your arts our way. Thanks for giving a shit! Yours,

No part of this magazine may be used or reproduced without permission from the artists. For more information, contact junkdrawermagazine@gmail.com Cover art by Nellie Vance

Anneloes Marina makes touchable art; sometimes for indoors &amp; sometimes for outdoors, usually made of wood. They revel in all they do, &amp; they are always busy.

writes, mostly about water and mirrors and smoochin’. She currently lives in Milwaukee, WI where she reads physics books she can’t absorb and dystopian YA novels in Spanish. brocasarea.webflow.io/

34 year old Phish fan from Milwaukee. Lucky to have a inspiring wife, Cassie, and a joyful toddler, Drew. Trying to do better every day.

Hannah Richburg is an undergraduate English student at Eastern Kentucky University. She lives in Richmond, Kentucky with her family.

I want my work to be bright and happy and radiate joy, not only in the ceramic piece itself, but also in the joy of making.

Loving you is like favoring one hand like choosing always raspberry over cherry like my yawn after anyoneâ&amp;#x20AC;&amp;#x2122;s yawn like in science fiction when a man has his memory erased but dreams over and over of a stranger in a strange home and then like later when his night muscles walk him there to find he knows somehow where the spare key is kept and loving you is

“Anakin, you’re breaking my heart,” except on Earth and off the record where I know that it’s problematic my being the female lead I see the eyes roll and lose focus on the picture I have found myself in but there is love about me that can’t be helped love that is like yielding to anchor weight when everyone took me for a stronger swimmer

what mythic creatures protect you from the hell that is a mind made up the wrong way what sparkle-scaled, fiery beast guards your gate from the marching army that is a lifetime of decisions poorly made and how do you just get up in the morning easy peasy you move in snake ways legless you move all hush hush like a swallowing throat tell me how you got here without having a grip on the ladder rungs give me the name of the engineers making your armor give me directions to the sacred pool that lets you float forever in the inlet give me the salve you rub over your skin to always have something between your body and the worldâ&amp;#x20AC;&amp;#x2122;s

Torso In Trouble What Of Their Homes Ever Expansion 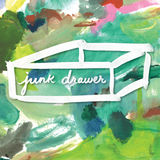