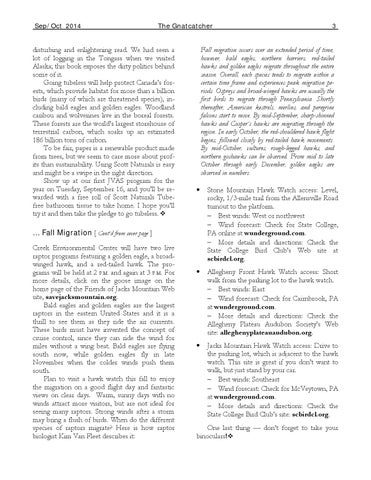 disturbing and enlightening read. We had seen a lot of logging in the Tongass when we visited Alaska; this book exposes the dirty politics behind some of it. Going tubeless will help protect Canada’s forests, which provide habitat for more than a billion birds (many of which are threatened species), including bald eagles and golden eagles. Woodland caribou and wolverines live in the boreal forests. These forests are the world’s largest storehouse of terrestrial carbon, which soaks up an estimated 186 billion tons of carbon. To be fair, paper is a renewable product made from trees, but we seem to care more about profits than sustainability. Using Scott Naturals is easy and might be a swipe in the right direction. Show up at our first JVAS program for the year on Tuesday, September 16, and you’ll be rewarded with a free roll of Scott Naturals Tubefree bathroom tissue to take home. I hope you’ll try it and then take the pledge to go tubeless. 

Fall migration occurs over an extended period of time; however, bald eagles, northern harriers, red-tailed hawks and golden eagles migrate throughout the entire season. Overall, each species tends to migrate within a certain time frame and experiences peak migration periods. Ospreys and broad-winged hawks are usually the first birds to migrate through Pennsylvania. Shortly thereafter, American kestrels, merlins, and peregrine falcons start to move. By mid-September, sharp-shinned hawks and Cooper’s hawks are migrating through the region. In early October, the red-shouldered hawk flight begins, followed closely by red-tailed hawk movements. By mid-October, vultures, rough-legged hawks, and northern goshawks can be observed. From mid to late October through early December, golden eagles are observed in numbers. 

Jacks Mountain Hawk Watch access: Drive to the parking lot, which is adjacent to the hawk watch. This site is great if you don’t want to walk, but just stand by your car.  Best winds: Southeast  Wind forecast: Check for McVeytown, PA at wunderground.com.  More details and directions: Check the State College Bird Club’s site: scbirdcl.org.

… Fall Migration [ Cont’d from cover page ] Creek Environmental Center will have two live raptor programs featuring a golden eagle, a broadwinged hawk, and a red-tailed hawk. The programs will be held at 2 P.M. and again at 3 P.M. For more details, click on the goose image on the home page of the Friends of Jacks Mountain Web site, savejacksmountain.org. Bald eagles and golden eagles are the largest raptors in the eastern United States and it is a thrill to see them as they ride the air currents. These birds must have invented the concept of cruise control, since they can ride the wind for miles without a wing beat. Bald eagles are flying south now, while golden eagles fly in late November when the colder winds push them south. Plan to visit a hawk watch this fall to enjoy the migration on a good flight day and fantastic views on clear days. Warm, sunny days with no winds attract more visitors, but are not ideal for seeing many raptors. Strong winds after a storm may bring a flush of birds. When do the different species of raptors migrate? Here is how raptor biologist Kim Van Fleet describes it:

One last thing — don’t forget to take your binoculars! 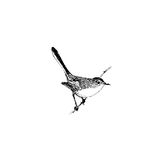