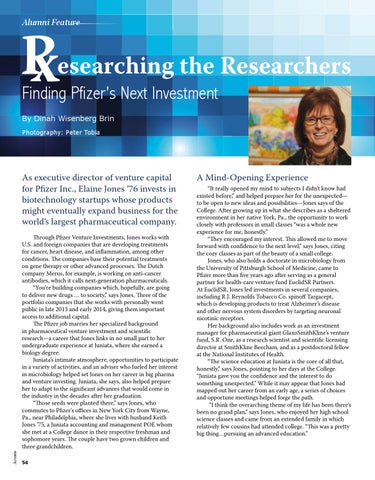 As executive director of venture capital for Pfizer Inc., Elaine Jones ’76 invests in biotechnology startups whose products might eventually expand business for the world’s largest pharmaceutical company. Through Pfizer Venture Investments, Jones works with U.S. and foreign companies that are developing treatments for cancer, heart disease, and inflammation, among other conditions. The companies base their potential treatments on gene therapy or other advanced processes. The Dutch company Merus, for example, is working on anti-cancer antibodies, which it calls next-generation pharmaceuticals. “You’re building companies which, hopefully, are going to deliver new drugs … to society,” says Jones. Three of the portfolio companies that she works with personally went public in late 2013 and early 2014, giving them important access to additional capital. The Pfizer job marries her specialized background in pharmaceutical venture investment and scientific research—a career that Jones links in no small part to her undergraduate experience at Juniata, where she earned a biology degree. Juniata’s intimate atmosphere, opportunities to participate in a variety of activities, and an adviser who fueled her interest in microbiology helped set Jones on her career in big pharma and venture investing. Juniata, she says, also helped prepare her to adapt to the significant advances that would come in the industry in the decades after her graduation. “Those seeds were planted there,” says Jones, who commutes to Pfizer’s offices in New York City from Wayne, Pa., near Philadelphia, where she lives with husband Keith Jones ’75, a Juniata accounting and management POE whom she met at a College dance in their respective freshman and sophomore years. The couple have two grown children and three grandchildren. 54

“It really opened my mind to subjects I didn’t know had existed before,” and helped prepare her for the unexpected— to be open to new ideas and possibilities—Jones says of the College. After growing up in what she describes as a sheltered environment in her native York, Pa., the opportunity to work closely with professors in small classes “was a whole new experience for me, honestly.” “They encouraged my interest. This allowed me to move forward with confidence to the next level,” says Jones, citing the cozy classes as part of the beauty of a small college. Jones, who also holds a doctorate in microbiology from the University of Pittsburgh School of Medicine, came to Pfizer more than five years ago after serving as a general partner for health-care venture fund EuclidSR Partners. At EuclidSR, Jones led investments in several companies, including R.J. Reynolds Tobacco Co. spinoff Targacept, which is developing products to treat Alzheimer’s disease and other nervous system disorders by targeting neuronal nicotinic receptors. Her background also includes work as an investment manager for pharmaceutical giant GlaxoSmithKline’s venture fund, S.R. One, as a research scientist and scientific licensing director at SmithKline Beecham, and as a postdoctoral fellow at the National Institutes of Health. “The science education at Juniata is the core of all that, honestly,” says Jones, pointing to her days at the College. “Juniata gave you the confidence and the interest to do something unexpected.” While it may appear that Jones had mapped out her career from an early age, a series of choices and opportune meetings helped forge the path. “I think the overarching theme of my life has been there’s been no grand plan,” says Jones, who enjoyed her high school science classes and came from an extended family in which relatively few cousins had attended college. “This was a pretty big thing…pursuing an advanced education.” 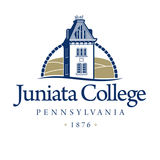