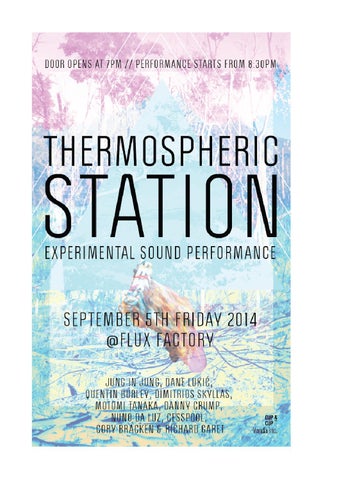 The space you have just stepped into has no weather. Is your body pulsing like volcanic lava or stiff like a giant iceberg? The inhabitants expose their bodies to cosmic rays and experiment with their tolerance limits. Some astronauts made themselves fall from phenomenal heights. However, no one knows whether they fell or not. When the Sun has more magnetic storms, the night auroras shine with greater intensity. Only during the nighttime, music here travels a great distance, almost reaching to the earth. Are your movements holding gravity tight? Or did you accidentally slip into outer space as if you were dusted off by solar wind? The Thermospheric Station brings together sound artists, contemporary classical composers, experimental musicians and contemporary dancers from different sides of the world to create an experimental sound performance. Coming from Greece, Portugal, Bosnia, USA, Japan, and South Korea, this diverse group is presenting their work at Flux Factory in New York. Nuno da Luz, a current artist in residence at Residency Unlimited, will play field recordings enhancing some resonance ranges with percussive instruments and feedback loops. To describe his piece, he quotes the composer, Maryanne Amacher: “Tone-of-place, experienced, heard through skin, detected by unnamed sensibilities, and impression carried-in through skin even when not in the physical place. Tone around you and with you. I don’t like your tone. I like your tone. I like the tone of this place.”

Composer Dimitrios Skyllas wrote a piece for a trio based on Rilke’s poem “Autumn.” The vocalist Motomi Tanaka will perform alongside percussionist Cory Bracken, and Skyllas will complete the trio on melodica. An emphasis is given on the word “Someone,” where the composer contemplates the (non) existence of a superior force. Jung In Jung, a current artist in residence at Flux Factory, will present a dance and sound collaboration. The sound composition will be improvised by both the limited and free physical movement of two dancers, Dane Lukic and Quentin Burley. Triggered by a game controller’s red wires, data relating to the position and length is then programmed to manipulate sound. In “Pull,” the band Cesspool explores magnetism and verticality. They experiment with three-dimensional speaker placement and vertical space, and build arrival points into the structure of the piece, approaching said points with exponentially increasing and decreasing momentum. Cesspool will present their works under the artwork,

“Sound Cave,” by Danny Crump. The shape of the dome creates a unique acoustic amplification, further layering the effect of the sound. Richard Garet‘s performance will focus on creating processes that interact and activate sonic material such as electromagnetic waves, modified tape, cracked media, sonification of light, and computer processing. This sonic construction will surface in real-time, creating a poly-layered sonic field where the final outcome consists of amplifying manifestations between the materials and articulating colliding forces being carefully treated, weighed, and measured. The concert is organized by Jung In Jung and produced by Sungpyo Hong. Audiences are invited to explore the variety of performances with delicious refreshments provided by Cup&amp;Cup and Yonda Inc. Poster design by Amela Parcic. Special thanks to Nat Roe, Will Owen, Tina Kohlmann, Sandy Gordon, Lola Bengen, and Julian Navarro.

7pm – 8:30pm drink and snacks 8:30pm Nuno da Luz 8:45pm ‘(Non) Gravity’ - Dimitrios Skyllas / Motomi Tanaka / Cory Bracken The leaves are falling, falling as if from far up, as if orchards were dying high in space. Each leaf falls as if it were motioning &quot;no.&quot; And tonight the heavy earth is falling away from all other stars in the loneliness. We&#39;re all falling. This hand here is falling. And look at the other one. It&#39;s in them all. And yet there is Someone, whose hands infinitely calm, holding up all this falling. -Rilke 9:10pm Intermission 9:40pm ‘Thermospheric Station’ - Jung In Jung / Dane Lukic / Quentin Burley 9:50pm ‘The Pull’ - Cesspool 10:00pm Richard Garet

Jung In Jung (Director &amp; Producer) Jung In Jung is a sound artist/designer from South Korea who has been primarily UK-based for the past 7 years. Her works have been shown in different cities in the UK: London, Edinburgh, Glasgow, Dundee, and Stirling, and other European countries: Germany, Italy and Turkey. She thinks about how to ‘present’ sound in interesting ways with interactivity. For the past three years, she has collaborated with contemporary dancers using motion-tracking technology to create improvisational dance-sound works. Jung In is a current artist in residency at Flux Factory and is also holding art workshops to help learn the computer program, MAX MSP, at Pioneer Works. From this October she starts her Doctor of Philosophy program in sound art at The University of Huddersfield in the UK.

Sungpyo Hong (Co-producer) Sungpyo Hong made his debut in the summer of 2011 as an off-Broadway producer by presenting the play, Hamyul/Hamlet, at the La Mama ETC, New York City. He has been participating in numerous productions in Korea and the United States. He has produced and promoted classical/jazz performances, musicals and plays in Lincoln Center, Bird Land, Village underground, and B.B. King Blues Club. He has participated in JARA SUM International Jazz Festival, DUMBO Dance Festival, Cool New York Dance Festival, etc. Currently, he is participating in the production of the musical Kinky Boots, now playing on Broadway. Sungpyo Hong is the Co-Founder of TresArts Management in New York City.

Dimitrios Skyllas Dimitrios Skyllas is a London based composer, born in Greece in 1987. He was trained as a pianist and musicologist at Kingston University (London) and continued as a composition student with Nigel Osborne at the University of Edinburgh. In 2012 he graduated from the Royal Conservatoire of Scotland, holding a second Masters degree in composition, after receiving various important scholarships for his studies. Currently, he lives in London, studying next to the composer Michael Finnissy. Apart from ensemble collaborations, Dimitrios performs his own works as a solo pianist.

Motomi Tanaka Motomi Tanaka is a soprano from Yokohama, Japan. She holds a Bachelor of Arts degree from Keio University and Master of Music in vocal performance from Musashino Academia Musicae. She has been actively participating in vocal workshops, master classes, summer festivals and performing on stages in USA, Italy, and Japan. Her great passion towards art songs and new music has given her many opportunities to premier composers’ new works. She is currently pursuing Professional Studies Diploma in Voice and Opera at Manhattan School of Music.

Cory Bracken Cory Bracken is a percussionist and composer living in Brooklyn. As a performer, he is an active member of the Ashcan Orchestra (Collection of toy instruments and electronic inventions guided by composer Pat Spadine), Uptown Girls (Guitar/percussion duo with Joe White), Iktus Percussion (Flexible new music percussion-centric collective based in Stony Brook and Brooklyn), Why Lie? (Experimental folk unit comprised of Aliza Simons and Dave Ruder), and as a soloist under the moniker REAL ADULT (focusing on object-based percussion and electronics). He also plays vibraphone with rock groups led by Nate Kinsella and Diego Clare. Past projects include The Sweat Lodge (composer/performer consortium featuring Dave Ruder, Amirtha Kidambi, Joe White, Ian Munro, and Ellen O’Meara) and Performers Forum (a monthly event he founded

Am ph in cr

in Brooklyn focused on performance, lecture, and discussion with a variety of experimental musicians). Other collaborations have included theatrical performances with the Rady &amp; Bloom Playmaking Collective, the Panoply Performance Laboratory, and WILD TORUS. A forthcoming solo record of REAL ADULT material was recently recorded at Issue Project Room and will be released this fall on the Gold Bolus label.

Nuno da Luz Nuno da Luz is an artist and a publisher, born in Lisbon, Portugal in 1984, based in Berlin, Germany. His work circumscribes both aural and visual in the form of sound events, installations and printed matter, mostly distributed through ATLAS Projectos and Palmario Recordings. He is currently a resident at Residency Unlimited, Brooklyn NY.

Dane Lukic Dane Lukic is a Lecturer in Organisational Behaviour and a dancer/performer originally from Bosnia and Herzegovina and currently based in London. Dane combines his academic teaching and research with analysis in dance and improvised performance. He has performed with a number of UK and international dance companies and choreographers including RuthMillsDance, Dance House, Tanztheater, Secret Garden Party, Creative Scotland and others. He forms a part of Ajos Dance Company London. Dane is trained in contemporary dance with particular focus on contact improvisation. He is particularly interested in the boundary space between different fields - between disciplines, between cultures, between styles of dance, between art forms and between dance and non-dance spaces. Therefore he is involved and interested in developing performances in non-traditional spaces and participative dance.

Quentin Burley Quentin Burley is a dance artist based in Brooklyn. His choreographic works have been presented at The Red Bean Studios and Triskelion Arts. He has had the pleasure of performing with Dante Brown/Warehouse Dance, The Moving Architects, and The Median Movement. Quentin hails from Youngstown, Ohio and received a BFA in Dance and a BA in Philosophy from The Ohio State University in 2013.

Cesspool Cesspool is an electroacoustic duo comprised of composer/performers Dave Koenig and Abraham Z. Morrison. They use percussion to trigger smeared, nauseated sounds.

Danny Crump Danny Crump is a visual artist working across a wide range of media including ceramics, found objects, performance and installation. His work investigates the essence of a material and seeks to transform common forms and surfaces into unexpected visual experiences. He has completed residencies in China, New Zealand, and throughout the United States. A southwest native, his work has long been inspired by the space of the American West. Danny has just finished the artist residence program at Flux Factory.

Amela Parcic Amela Parcic is an interdisciplinary artist who uses video installations, paintings, collages, and photography to explore memory and the sense of dislocation that urbanization has on individuals. Having lived in many different places throughout her life, she is interested in creating a space where the imaginary and the observed world meet; a dialogue between

imagined and experienced places. Her work oscillates between the autobiographical, dreamlike and mystical, investigating history, language, the urban environment and the net of interactions within. Born in Serbia and raised in Germany, Amela completed her BFA in Painting at Pratt Institute in New York City. In 2010, she was awarded a Fulbright grant for a project in Croatia. Currently she is a participant of NYFA’s Immigrant Artist Mentorship Program. She has exhibited solo shows in Croatia and collaborative projects in the Netherlands, Croatia, Czech Republic, and the United States.