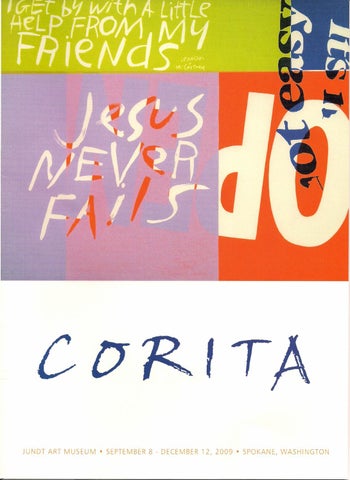 BREAKING (ALL) THE RULES It is the property of true genius to disturb aU settled ideas. - Goethe

n 1968,at the height of her fame as an artist, Sister Corita gathered her art

California to draw up

"Ten Rules and Hints for Students and Teachers." As one of those students, I remember how the first rule prudently advised us to "find a place we trust, and to try trusting it for a while." Subsequent rules gave equally sage advice, such as "the only rule is work," and "consider everything

us "to break all the rules, even our own."

Those times, especially the 1960s, were fraught with unusual change, both devotional and secular, and, ultimately, it was her adherence to Rule Ten that left us with her greatest legacy: her ground-breaking art

accessible to popular audiences. By the mid-1960s, Corita's serigraphs - which she often gifted to friends or sold at ridiculously low prices - reflected an inventive, compassionate spirit

turned commercial advertising on its head, bending and reshaping its slogans into renewed, humanitarian readings

In 1968,prints such as you shoot yourself, America;

manflowers (fig 5); the cry that wiU be heard (fig. 6); and news of the week show how deeply social justice became one of her muses. Like pop artist Andy Warhol, Corita used the silkscreen process to make eye-popping multiple prints of the "stuff" around her, yet Warhol's cool detachment and fascination with fame contrasted sharply with Corita's lyrical commitment

about his choice of subjects (from Campbell soup cans, to Mao, to the electric chair) while Corita metaphorically (and in reality) wore a silver heart pinned on her chest

orita was known for her skill with words as much as she was for her inventive design methods. She read

and her late night readings would reemerge in her art, or her lectures, or both. She borrowed

passages from poets, pop musicians, and visionaries - from the apostles to the Beatles - and scrawled the quotes across print after print in her memorable, beloved calligraphy. Artist Ben Shahn once noted that Carita had joyously revolutionized type design, and after that she was branded a "joyous revolutionary." oyous or not, Corita was convinced that all people are artists, and that art is something that all people can do. To that end, Corita often quoted a Balinese aphorism: "We have no art, we do everything as well as we can." And with that she charismatically got her art students and her many enthusiasts to look at and use

e 'erything around them in their work. In keep right (1967) (fig. 3), which nimbly reshaped the iconography of

eet signs, and in stop the bombing (1967) (fig. 4), she boldly responded to newspaper headlines during the

controversial war in Vietnam. Corita was way ahead of her time. Julie Ault. author of Come Alivel The Spirited Art of Sister Carita, points out that, "Corita's artistic and graphic innovations of forty years ago speak freshly to current art and design practices

Her social consciousness and anti-war stance connect with us right now."

the fifth of six children, and the youngest girl. and three of the six children would later enter religious orders. When she was a young child, the family migrated west

finally to Los Angeles, where "Frannie" was educated and found her passion for art

At the age of eighteen, she

Her forward-thinking, scholarly order mentored the young nun, and

in 1941Sister Corita completed a Bachelor's degree in Art from Immaculate Heart College She received a Master's in Art History from the University of Southern California in 1951. A-year later, she began to produce multi-layered prints, some with as many as twenty-two colors. The early prints were clearly influenced by devotional themes such as nativity (fig. 2) (1956) and tnis beginning of miracles (1952) (fig I), described by Jules Heller, in Printmaking

Today as a richly pigmented, Byzantine-like serigraph that glows aura-like on the wall.

most of her academic career Corita was a producing artist,

a full time art professor, and a charismatic networker for the

authored with Corita Learning By Heart Teacnings to Free tne Creative Spirit, remarked that as a teacher "Corita assumed a lot

could and would do everything that she asked for. And everybody did That was her real genius"

Her studio time was often crammed into

whirlwind stints in late August when school was out

some of her most recognized prints in a small cinderblock studio across from the campus of the Immaculate Heart College, home today of the American Film Institute

prints with the help of willing friends and admirers. Thanks in part to Corita's growing recognition as an artist, the College became a hub of Catholic cool. attracting guest lecturers such as activists Daniel and Philip Berrigan, writers Ray Bradbury and Henry Miller, musicians John Cage and Ravi Shankar, theologians Harvey Cox and Hans KOng, visionary Buckrninster Fuller, and designers Charles and Ray Eames, among others

By 1967, Sister Corita was featured on the cover of

ewsweek magazine with the caption, "THE NUN GOING MODERN."

orita and her community had become a lightening rod for the

(....---wrath of Los Angeles Cardinal McIntyre who reprimanded the nuns for their progressive responses to Vatican II. Somewhat unexpectedly, in 1968 Corita resigned from her academic post, left her religious order, and relocated swiftly to Boston.

year, at the age of fifty, Corita created individual alphabet prints for the series tellingly titled damn everything

A second alphabet theme was created for

appears to reflect what must have been a freeing yet tumultuous personal transition.

, n Boston, Corita's career never faltered. in 1971, she was commissioned by the Boston Gas Company to create a multicolor rainbow on a gas tank, reportedly the largest copyrighted artwork in the world. The rainbow, meant to symbolize hope for the city's future, caused a flurry of controversy as some observers claimed that the blue stripe of the rainbow replicated the profile of the North Vietnamese leader Ho Chi Minh. At that time, Corita also had become a plein air watercolorist

as evidenced in the print

crocuses for win LeI' (1980), a symbolic response, allegedly, to a decade-long struggle with cancer during which she considered herself a survivor. Simultaneously, Corita continued to take on works of public art, both large and small. She produced a billboard campaign in which her recognizable script floated on top of a background of blue and green waves with the slogan we can create life without war. The artist described this as the most religious thing she had ever done

showed an artist's concern for the humanity around her and all of the odd places it pops up. In 1985,

One of her final works of public art, the Love stamp

was a fitting testimony for a truly "joyous revolutionary" who was guided, as Che Guevara once remarked, by great feelings of love. Corita died gently, one year later, at a friend's home near Boston. Her final request was for friends and admirers to hold a celebration in her honor, which they did.

tot surprisingly, there is a spirited renewal around Corita today

Now, he focuses on a retrospective

of her profound and delightful silkscreen prints. Sasha Carrera, director of the Corita Art Center summarizes,

"Corita's work is sincere, spiritual. and hopeful. it's inclusive, not exclusive, so the viewer can have a dialogue with the artist. Many of the new Corita devotees are self-taught artists." Like contemporary street artists and activists, such as Shepard Fairey - author of the Obama HOPE poster - Corita wholeheartedly embraced popular culture and skillfully elevated it to reflect our highest longings. By doing so, Corita became an artist whose graphic innovations and nourishing messages always remain timely Barbara Loste, Ph.D. Guest Essayist

Barbara Loste received a BA in Art from Immaculate Heart College, Los Angeles and holds a Master's degree in Comrnunications/Latin

American Studies from the UNAM, Mexico City. She completed a Ph.D. in

Leadership Studies at Gonzaga University (2000) for which her dissertation was a biography of her former teacher, Carita Kent. For additional information on Corita. visit the Corita Art Center, www.corita.org 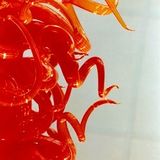 Brochure to accompany an exhibition of prints by Corita Kent from the permanent collection of the Jundt Art Museum in the Jundt Galleries at...

Brochure to accompany an exhibition of prints by Corita Kent from the permanent collection of the Jundt Art Museum in the Jundt Galleries at...