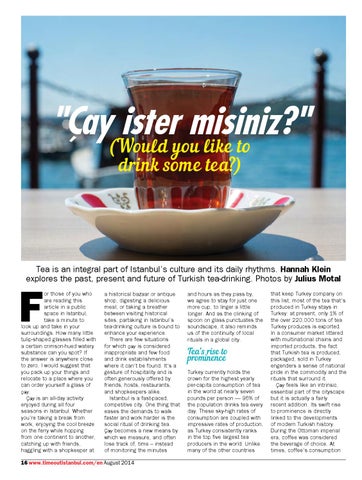 Tea is an integral part of Istanbul’s culture and its daily rhythms. Hannah Klein explores the past, present and future of Turkish tea-drinking. Photos by Julius Motal

or those of you who are reading this article in a public space in Istanbul, take a minute to look up and take in your surroundings. How many little tulip-shaped glasses filled with a certain crimson-hued watery substance can you spot? If the answer is anywhere close to zero, I would suggest that you pack up your things and relocate to a place where you can order yourself a glass of çay. Çay is an all-day activity enjoyed during all four seasons in Istanbul. Whether you're taking a break from work, enjoying the cool breeze on the ferry while hopping from one continent to another, catching up with friends, haggling with a shopkeeper at

a historical bazaar or antique shop, digesting a delicious meal, or taking a breather between visiting historical sites, partaking in Istanbul’s tea-drinking culture is bound to enhance your experience. There are few situations for which çay is considered inappropriate and few food and drink establishments where it can't be found. It's a gesture of hospitality and is often generously offered by friends, hosts, restaurants, and shopkeepers alike. Istanbul is a fast-paced, competitive city. One thing that eases the demands to walk faster and work harder is the social ritual of drinking tea. Çay becomes a new means by which we measure, and often lose track of, time – instead of monitoring the minutes

and hours as they pass by, we agree to stay for just one more cup, to linger a little longer. And as the clinking of spoon on glass punctuates the soundscape, it also reminds us of the continuity of local rituals in a global city.

Tea’s rise to prominence Turkey currently holds the crown for the highest yearly per-capita consumption of tea in the world at nearly seven pounds per person — 96% of the population drinks tea every day. These sky-high rates of consumption are coupled with impressive rates of production, as Turkey consistently ranks in the top five largest tea producers in the world. Unlike many of the other countries

that keep Turkey company on this list, most of the tea that's produced in Turkey stays in Turkey: at present, only 1% of the over 220,000 tons of tea Turkey produces is exported. In a consumer market littered with multinational chains and imported products, the fact that Turkish tea is produced, packaged, sold in Turkey engenders a sense of national pride in the commodity and the rituals that surround it. Çay feels like an intrinsic, essential part of the cityscape but it is actually a fairly recent addition. Its swift rise to prominence is directly linked to the developments of modern Turkish history. During the Ottoman imperial era, coffee was considered the beverage of choice. At times, coffee's consumption