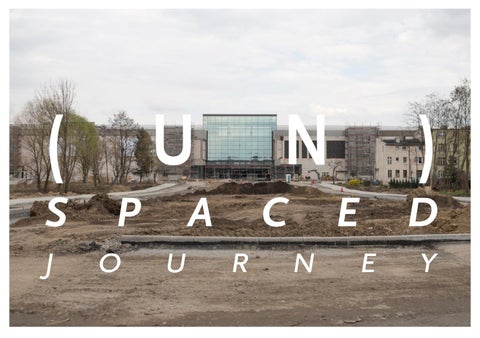 Open your eyes Look what you have done with me I want to speak well of me Open your eyes I want to feel appreciated So could sing controversial buildings If they were able.

Iâ&amp;#x20AC;&amp;#x2122;m standing in the middle of the sea grass Wind rocking all of grain In the sky beautiful clouds dance Green and Blue meeting together At one line, in our sight

What is the walk? What is the walk throughout the city? Casual route from A to B, from home to work, to school, to visit? Routine, which is a straight line running through our lives? and preferences. The side streets of the back tenements, for quite people, lonely, celebrating free time alone. Walkway along city highways, for those who isolate themselves from the environment, noise - barrier which separate from everyday problems. The bustling pedestrian form open, love the fast rhythm of the city. Is choosing the same road every day, denote about our stability, fear before risk? In opposite case,

them. Itâ&amp;#x20AC;&amp;#x2122;s very interesting what each consisting part of a structure is able to tell as about the whole composition. Is the emotion evoked by this tiny element similar to what we get from complete thing? Or they are showing us different, opposite faces of the same structure? Which of them is true? Letâ&amp;#x20AC;&amp;#x2122;s try. The city, View from scraps.

The interesting thing, the environment is changing and you along with it. Also your look changes, you loose

pastel colors. The former blocks complexes were open, full of trees, swings, with tables for chess or common space for residents. Tram route heavily neglected, rumble of wheels tram spreads further around the area. Local residents have enough of this noise, but they don’t protest. Why? Because the road still needed and patiently waiting for repairs. Beyond is still green, a large number of trees and shrubs, some of them remembering times before the construction of the new district. It has always been the biggest advantage of this part of the city,I was on the climb

change, what are your advantages and disadvantages, a sense of what you’re doing, if you’re someone needed. You’re like the town and the town is like you. Norbert Tomasz Meissner

medium length and not breakable. Draw in the sand a large square, divide it into four equal, for each of you a kingdom, a piece of your domain. But the ground to little, appetite increases, you need to pick it up even though your friend. There is a way, take a stick, aim for land neighbor.

quickly catches and stop the escape. fellow, without exceeding the bounds of its land. Youâ&amp;#x20AC;&amp;#x2122;ll get customs, you will take the award, new areas. If you do not give advice, your loss, you lose the land.

You hit an enemy, you make annexation of the same stick. Just do not lose your balance and do not prop on the ground. And so everything is repeated until one is new you square in the world.

My eight years turned out to be a love-hate clichĂŠs. Itâ&amp;#x20AC;&amp;#x2122;s been a marathon of ups and downs, a moving sinusoid, mildly turbulent, but failing to peak at either of the poles. The real movement, however, was taking place around (and above) me. Only during few brief gaps I was able to of these temporary farewell-to-arms moments. It made me I was shivering with anticipation. I was leaving a small costal town for an agglomeration of almost a million. similar disorder, resulting from the same maneuvers. A turmoil I rarely even visited bigger cities, having only spent a orchestrated by frictions that were a product of an ongoing quarter of a year in London. But even this brief lesson strife between different groups of interest. Throughout the years, I was presented with a multitude of visions: of what the city should evolve into, of the direction it should follow, which perception of a city was based on cultural archetypes. Literature has been especially keen on turning a city extremely hard to recall many of my early experiences, or to into an entity; an independent, breathing character, compare them to my initial expectations. back the computer-rendered images of what the city being a metropolis that could match the gargantuan was supposed to become. It animated the remains of presence of these urban behemoths. Still, it seemed exhilaratingly overwhelming; stirring, menacing and I was even able to recollect long-gone memories left intoxicating at the same time.

rickety, constantly alternated colossus; endlessly and relentlessly reshaped by the everlasting war between legions of local authorities, developers, and activists. Whether you like it or not, you inherit and acquire the traits of your city. So does your perception of it, thus glances with the void, however grotesquely hyperbolic this comparison may seem. This process becomes of matter, manhandled by little humans with megalomaniac ideas. In a strange onrush the city share. What is being done to the city is being done to you.

re-discover it. This booklet is the result of photographies, thoughts and stories about