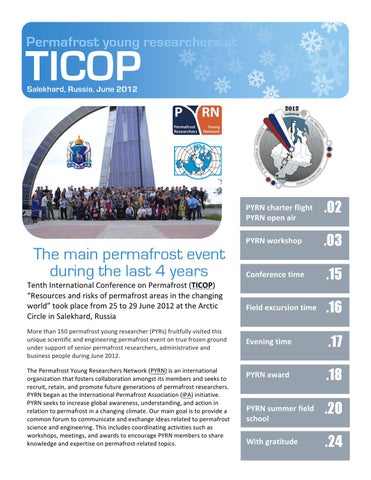 The main permafrost event during the last 4 years Tenth International  Conference  on  Permafrost  (TICOP)     “Resources  and  risks  of  permafrost  areas  in  the  changing   world”  took  place  from  25  to  29  June  2012  at  the  Arctic   Circle  in  Salekhard,  Russia   More  than  150  permafrost  young  researcher  (PYRs)  fruitfully  visited  this   unique  scientific  and  engineering  permafrost  event  on  true  frozen  ground   under  support  of  senior  permafrost  researchers,  administrative  and   business  people  during  June  2012.   The  Permafrost  Young  Researchers  Network  (PYRN)  is  an  international   organization  that  fosters  collaboration  amongst  its  members  and  seeks  to   recruit,  retain,  and  promote  future  generations  of  permafrost  researchers.   PYRN  began  as  the  International  Permafrost  Association  (IPA)  initiative.   PYRN  seeks  to  increase  global  awareness,  understanding,  and  action  in   relation  to  permafrost  in  a  changing  climate.  Our  main  goal  is  to  provide  a   common  forum  to  communicate  and  exchange  ideas  related  to  permafrost   science  and  engineering.  This  includes  coordinating  activities  such  as   workshops,  meetings,  and  awards  to  encourage  PYRN  members  to  share   knowledge  and  expertise  on  permafrost-­‐related  topics.

Focus on  research  topics  and  skills   specific  to  permafrost;

More than  twenty  senior  permafrost   researchers  shared  their  rich   experience  with  students   (underground  and  Phd  as  well)  in  each   session,  coordinating  content  with   PYRN  session  leader  prior  to  the   workshop.

Senior and  young  leaders  of  sessions  were   encouraged  to  model  good  pedagogy  and   tailor  material  to  be  appropriate  for  an   international  audience.

Distribution and thickness of permafrost

Become a yamal man for an evening

Niu Fujun, Ph.D, Professor of State Key Laboratory of Frozen Soil Engineering, Cold and Arid Regions Engineering and Environmental Research Institute, CAS. He is vice-director of the state key laboratory a co-chairman of the Work Group of Permafrost Engineering under the IPA. His main research interests focus on infrastructures, geological hazards and environment in permafrost regions. Now he is working on the potential roadbed problems of the Qinghai-Tibet railway and regional permafrost change under the climate change and engineering activities. Language – English.

James W. Rooney was President of R&M Consultants, Inc. and an original partner of this Alaskan engineering firm that began in Fairbanks in 1969. Mr. Rooney is a geotechnical engineer and has over 50 years of experience in engineering design and construction of facilities in cold climates. He has both a BSCE and MSCE and is a past president of USPA and a former member of the US Polar Research Board. He has participated on many US/Russian technical exchange programs. Language – English.

Lukas Arenson, Dr.Sc.Techn.ETH, P.Eng., Senior Geotechnical Engineer in BGC Engineering Inc., Vancouver BC, Canada. Dr. Arenson specialised in frozen soil mechanics and geothermal modeling. He is experienced in using remote sensing data and GIS analysis tools to characterise surface morphology and evaluate changes in surface characteristics for engineering purposes. He has also studied the effects of natural air convection in cold climates. His project experience includes glaciological and permafrost baseline studies for environmental impact assessments and geothermal designs of dams and road embankments. Language – English. 2.Natural and man-caused cryogenic processes Stuart Harris is Professor Emeritus in the Department of Geography, University of Calgary, Alberta, Canada. Prof. Harris has about 170 publications predominantly on permafrost, including a book on engineering in permafrost environments. Stuart has an Honours B.Sc. (Mineralogy and Petrology – 1952), M.Sc. (Sedimentary Petrology – 1955) and external Ph.D in Glacial Geomorphology, as well as a D.Sc in Geography from Queen Mary College University of London. He carried out the engineering for 80,000 troops in Egypt for 16 months (1954-5). The Nikolai Mihailovich Prjevalsky Medal was awarded to him for his research on Alpine Permafrost by the Russian Geographical Society in September, 1996. Language – English. Solomatin Vladimir Ivanovich, Head of the Laboratory of Geoecology of the North, Faculty of Geography Lomonosov Moscow State University, Professor, Doc. of Geographical Sc. Engaged in research of underground glaciation of permafrost, geoecology of the North, mechanisms and geography of underground ice formation. Explores the impact of underground glaciation on the dynamics of the coastal zone of Arctic seas. Language – English. !

Prof. dr.Jef Vandenberghe's general scientific expertise is in the field of geomorphology and sedimentology of river and wind deposits and inferred palaeoclimatological reconstructions. A main part of Vandenberghe's research activities focus on (former) periglacial (permafrost) and semi-arid environments. His research extended over many regions in western, central and eastern Europe, as well as in Surinam, China and Indonesia. He has been (is) member of the editorial board of 7 international journals. He was also the coordinator of an EUFP funded project EPECC (EV5V-CT93-0273). Vandenberghe has 3 special professorships in China and Serbia. Language – English. ! Vasiliev Alexander Alekseevich, chief researcher at the Institute of Earth Cryosphere SB RAS. Graduated from Faculty of Geology, Lomonosov Moscow State University in 1974, defended his PhD thesis in 1980, and doctoral dissertation in 2005. Area of research - the evolution of coastal marine and offshore permafrost in a changing climate and ocean (marine) environment. Organized and participated in several marine expeditions to the Kara Sea for studying the permafrost of shelf. Language – Russian.

3.Distribution and thickness of permafrost

Dr. Dario Trombotto, Geologist, Córdoba, Argentina. Specialized on South American Geocryology of passed and present periglacial environments. Doctoral thesis at the University of Heidelberg, Germany (1988). He cooperates with the Spanish Terminology for the Geocryology. Argentine representative of the IPA. Contact Investigator in Mendoza for permafrost active layer at the Global Terrestrial Network for Clima. Founded the Argentine and South American Association of Permafrost and of the IPA working group: Permafrost map and Thermal State of Permafrost for Tropical Mountains. Presently he is researcher at Argentine Institute for Snow Research, Glaciology and Environmental Sciences - National Research Council. Language – English.

Stephan Gruber, Senior Researcher in Department of Geography, University of Zurich, Switzerland. My research concerns the understanding and quantification of permafrost and other cryosphere phenomena in mountain areas. In this, I mostly use a combination of field measurements and computer simulations. I greatly enjoy the inspiration and challenge coming from the diverse scientific backgrounds of the people I collaborate and work with. Besides my research I am editor for the journals The Cryosphere and Geografiska Annaler, and I review for several science funding agencies. Language – English.

Shesternev Dmitry Mikhaloivich, Doc. of Technical Sciences, Professor, Head of the Laboratory of Engineering Geocryology at Permafrost Institute SB RAS, a graduate of the Geocryology Department, Lomonosov Moscow State University. Research areas: general and engineering geocryology, geotechnology and ecology of permafrost. The author and coauthor of 10 patents of the Russian Federation, 10 monographs, 3 textbooks and more than 200 articles and reports in Russia and abroad. Language – Russian.

Christine Siegert, PhD, worked from 1969 to 1990 as a research scientist at the laboratory of cryolithology of the Permafrost Institute in Yakutsk. Between 1992 and 2001 she joined the Alfred Wegener Institute for Polar and Marin Research (AWI) in Potsdam as a senior scientist and established a working group for permafrost studies in Siberian polar regions. After retirement she remained a scientific consultant of the AWI permafrost group. Her research focused on mineral formation under permafrost conditions and on the genesis of syncryogenic permafrost deposits using a multidisciplinary approach. Language – German and Russian.

Dr. Ming-ko Woo is a Professor Emeritus in the School of Geography and Earth Sciences, McMaster University, Canada. He specializes in snow and hydrology of permafrost regions, and has conducted field research for over three decades, working in environments that range from polar deserts of the High Arctic, alpine and subapline areas in Canada and Chinese Tian Shan, to extensive wetlands of the subarctic. He has published several hundred articles with his students and his most recent publication is a book on “Permafrost Hydrology”. Language – English.

Dr. Anna E. Klene is an Associate Professor in the Department of Geography at the University of Montana. Her research has focused primarily on studying permafrost-climate interactions as part of the Circumpolar Active-Layer Monitoring project. She has current research projects examining the impacts of urban development on permafrost landscapes in northern Alaska and topoclimatology in the Rocky Mountains. Language – English.

Naymushina Alla Gennadievna, Doc. of Medical Sc., Assistant Professor, Theory and Methodology of Professional Education Department at the Tyumen State Oil and Gas University. The author of 75 scientific papers on the problems of the Tyumen and north Tyumen region inhabitant’s adaptation. Language – Russian.

9.Job searches: Applications, interviews and job talks Dr. Larry Hinzman is the Director of the International Arctic Research Center and is Professor of Civil and Environmental Engineering at the University of Alaska Fairbanks. Professor Hinzman’s primary research interests involve permafrost hydrology. He has conducted hydrological and meteorological field studies in the Alaskan Arctic continuously for over 30 years while frequently collaborating on complementary research in the Russian and Canadian Arctic. His research efforts have involved characterizing and quantifying hydrological processes and their inter-dependence with climate and ecosystem dynamics. Language – English.

Kenji Yoshikawa, professor in the Water and Environmental Research Center (WERC), University of Alaska Fairbanks; he is actively engaged in geophysical, geothermal, hydrologic and permafrost research throughout Alaska. Yoshikawa has aggressively pursued the goals of the Permafrost outreach program and developed good working relationships between the involved science and education communities. Language – English.

PYRN award The Permafrost  Young  Researchers  Network  (PYRN)   hosted  its  2012  outstanding  presentation  award  series   at  the  Tenth  International  Conference  on  Permafrost   (TICOP)  in  Salekhard,  Yamal-­‐Nenets  Autonomous   District,  Russia.  Thanks  to  the  generous  contributions   of  several  sponsors  six  awards  could  be  given  during   the  closing  ceremony  of  the  conference.  In  addition  to   the  regular  PYRN-­‐IPA  awards  for  outstanding   presentation,  this  year’s  series  also  included  the  Troy   L.  Péwé  award  and  the  Pavel  I.  Melnikov  award,  which   are  traditionally  given  at  International  Conferences  on   Permafrost  (ICOP),  as  well  as  PYRN  awards  for   outstanding  national  contributions.

Corina Doerfer  (Geographical  Institute,  University  of   Tuebingen,  Germany)  for  “SOC  Pools  and  Stocks  in   Permafrost-­‐affected  Soils  on  the  Tibetan  Plateau”.   She  received  a  one-­‐year  personal  subscription  to  the   journal  Permafrost  and  Periglacial  Processes   sponsored  by  the  John  Wiley  &  Sons.

TICOP field  school  for  young  scientists  gave  a  perfect  chance  to  meet   colleagues  from  over  Russia  and  world  and  to  change  knowledge  and  ideas   “in  situ”  being  in  real  permafrost  conditions.  The  deep  and  diverse  lectures   by  senior  scientists  and  engineers  provided  great  insight  into  natural   geological,  geomorphological,  hydrological  processes  in  permafrost  zone  as   well  as  peculiarities  of  construction,  mining  and  utilities  under  condition  of   severe  climate  and  perennially  frozen  ground.  Lectures  supported  by  real   examples  and  our  own  field  work  during  long  and  different  field  trips   provided  better  understanding  and  was  a  proper  base  for  developing  new   scientific  questions.  Lectures  and  everyday  walking  routes  covered  wide   range  of  natural  phenomena  and  research  themes.  Bringing  together  young   scientists  from  different  fields  of  permafrost  and  associated  sciences   caused  discussions  and  knowledge  exchange.    From  my  point  of  view  such   field  trips  with  rich  scientific,  field,  educational  and  cultural  program  are   essential  step  in  training  young  people  –  future  research  scientists,   engineers  and  natural  resource  managers.

The experience,  collaborations,  joy,  and   memories  that  were  gained  by  PYRs  during   TICOP  were  made  possible  by  the  incredible   support  of  the  Yamal-­‐Nenets  Autonomous   District  government.  150  stipends  were  provided   to  PYRs  and  included  conference  registration  fee,   airfare,  accommodation,  meals  and  social   events. 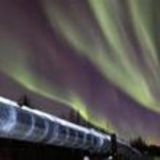