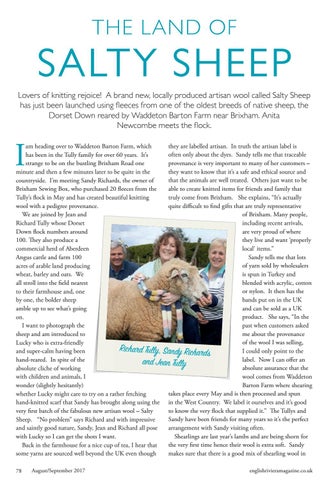 SALTY SHEEP Lovers of knitting rejoice! A brand new, locally produced artisan wool called Salty Sheep has just been launched using fleeces from one of the oldest breeds of native sheep, the Dorset Down reared by Waddeton Barton Farm near Brixham. Anita Newcombe meets the flock.

am heading over to Waddeton Barton Farm, which has been in the Tully family for over 60 years. It’s strange to be on the bustling Brixham Road one minute and then a few minutes later to be quite in the countryside. I’m meeting Sandy Richards, the owner of Brixham Sewing Box, who purchased 20 fleeces from the Tully’s flock in May and has created beautiful knitting wool with a pedigree provenance. We are joined by Jean and Richard Tully whose Dorset Down flock numbers around 100. They also produce a commercial herd of Aberdeen Angus cattle and farm 100 acres of arable land producing wheat, barley and oats. We all stroll into the field nearest to their farmhouse and, one by one, the bolder sheep amble up to see what’s going on. I want to photograph the sheep and am introduced to Lucky who is extra-friendly and super-calm having been hand-reared. In spite of the absolute cliche of working with children and animals, I wonder (slightly hesitantly) whether Lucky might care to try on a rather fetching hand-knitted scarf that Sandy has brought along using the very first batch of the fabulous new artisan wool – Salty Sheep. “No problem” says Richard and with impressive and saintly good nature, Sandy, Jean and Richard all pose with Lucky so I can get the shots I want. Back in the farmhouse for a nice cup of tea, I hear that some yarns are sourced well beyond the UK even though

they are labelled artisan. In truth the artisan label is often only about the dyes. Sandy tells me that traceable provenance is very important to many of her customers – they want to know that it’s a safe and ethical source and that the animals are well treated. Others just want to be able to create knitted items for friends and family that truly come from Brixham. She explains, “It’s actually quite difficult to find gifts that are truly representative of Brixham. Many people, including recent arrivals, are very proud of where they live and want ‘properly local’ items.” Sandy tells me that lots of yarn sold by wholesalers is spun in Turkey and blended with acrylic, cotton or nylon. It then has the bands put on in the UK and can be sold as a UK product. She says, “In the past when customers asked me about the provenance of the wool I was selling, I could only point to the label. Now I can offer an absolute assurance that the wool comes from Waddeton Barton Farm where shearing takes place every May and is then processed and spun in the West Country. We label it ourselves and it’s good to know the very flock that supplied it.” The Tullys and Sandy have been friends for many years so it’s the perfect arrangement with Sandy visiting often. Shearlings are last year’s lambs and are being shorn for the very first time hence their wool is extra soft. Sandy makes sure that there is a good mix of shearling wool in