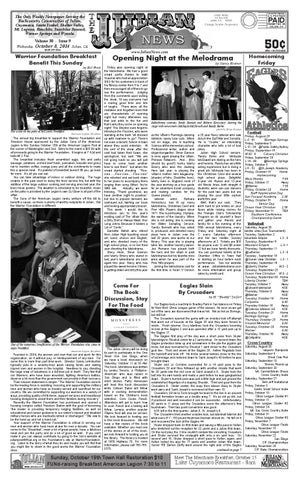 The scene on the patio at last years breakfast

The annual big breakfast to support the Warrior Foundation and Freedom House sponsored by the Julian Sons of the American Legion is this Sunday October 12th at the American Legion Post at the corner of Washington and 2nd. Entry to the event is $15.00 with all proceeds going to the Warrior Foundation. It begins at 7 A.M and lasts till 2 P.M. The breakfast includes fresh scrambled eggs, link and patty sausage, potatoes, corned beef hash, pancakes, biscuits and gravy not to mention coffee, orange juice and all the condiments to make this a special meal. If a plateful of breakfast doesn’t fill you, go back for more. It’s all you can eat. You can take advantage of indoor or outdoor dining. The huge crowds in the past used to delay the food service line but with the addition of the large outdoor cooking and serving area last year, the lines move quickly. The weather is scheduled to be beautiful, music on the patio is provided by the Legion’s own DJ Dave is all part of the affair. The Sons of the American Legion rarely venture off the hill to benefit a cause, as there is plenty of worthy recipients in Julian. But the Warrior Foundation is different.

Opening Night at the Melodrama

Come For The Book Discussion, Stay For The Food

Founded in 2004, the women and men that run and work for this organization, do it without pay, or reimbursement of any kind. For some this is more than part time work. Director Sandy Lehmkuhler typically puts in a seventy-hour week raising funds and visiting injured men and women in the hospital. Needless to say, directing the large crew of volunteers is a full time job in itself. They feel that our Warriors, who have been wounded, fighting America’s battles, deserve a lot more than the government can provide in their recovery. Their mission statement is simple. “The Warrior Foundation aims to be the leading force in assisting, honoring and supporting the military men and women who have so bravely served and sacrificed for our country. We are committed to supporting our warriors in a variety of ways, providing quality-of-life items, support services and transitional housing designed to assist them and their families during recovery.” Recently the Warrior Foundation has purchased and opened a housing complex called Freedom Station with the goal of becoming “the leader in providing temporary lodging facilities, as well as educational and career guidance to our nation’s injured and disabled military heroes who are medically retired or discharged.” “We vow to be the hand up and not a hand out.” Your support of the Warrior Foundation is critical in serving our men and women who have been at war for over a decade. You can come to the “Breakfast”, meet a lot of great people, have a fabulous meal and join the party and do a lot of good as well. If you can’t make it you can always contribute by going to the Son’s website at julianpost468sal.org or the Foundation’s site at WarriorFoundation. org. Listen to the story of what they do and maybe you will find that you might like to share in the good works the Warrior Foundation does.

Friday was opening night at the Melodrama. We had a good crowd partly thanks to Matt Kraemer who had an appreciation BBQ for his customers in back of his fitness center from 5 to 7 and then encouraged all of them to go see the performance. Judging from the comments upon exiting the show, I’d say everyone had a roaring good time and lots of laughs. There were all the mistakes and forgotten lines that are characteristic of opening night but many attendees say that just adds to the fun and that’s why they come on opening night! The Director even forgot to introduce the Floozies, who were standing at the back “all dressed up with nowhere to go!” There’s not even a decent Saloon in town where they could entertain. At the end of the show after the cast had taken their bows, she apologized, but said “We are not going back so you will just have to come back another time to see them” but when the crowd started shouting “Floozies….,Floo-zies.….Floo-zies” she relented and sat back down to her piano to accompany them singing their song When You’re With Me. Actually, we were thinking, “Thank goodness, we have another night to practice,” but due to popular demand, we sashayed out, twirling our boas and looking appropriately brazen. This week I would like to introduce you to this year’s exciting cast of The Villain Wore a Dirty Shirt or Always Wash Your Long Johns Because it Makes a Lot of “Cents.” Garnette Welsh who retired from Julian High teaching visual art, band, chorus and English, and who directed many of the high school plays, is on her third year directing the Melodrama. Stacy Hodo, Steve Gannon and Marty Emery who stared in last year’s Melodrama are back again this year. Stacy, who has played the sweet heroine 3 times, is getting down and dirty this year

The Julian Library will be doing its part to participate in the One Read One San Diego, when we have a book discussion on Saturday, October 11 at 10 AM. The book, Monstress was written by Lesley Tenorio, a PhillipinoAmerican who was raised in San Diego and is filled with short stories. Patty Asmussen will lead this book discussion while Colleen Baker will follow with a cooking demonstration based on the Children’s book selection, Cora Cooks Pancit. Attendees will get to learn how to cook Pancit and a tasting will follow. Lumpia, another popular Filipino food will also be served. We look forward to hosting you in this book discussion. We still have a few copies of the book available. Whether you read one of the stories or all of the book, we look forward to hosting you at the library. The library is located at 1850 Highway 78. For more information, please call 760-7650370.

as the Villain’s Flamingo-dancing sidekick, sassy Lola-Lola. When not on stage, she is teaching Science at the elementary school. Professional writer, author and singer/songwriter, Steve Gannon is once again playing the Villain, Phineas Flatworm. And… (this should be good!) hunky Marty Emery who was the dashing Hero last year, is playing the Villain’s mother, Mrs Mugwump, (shades of Mrs. Doubtfire here). Marty lives in England most of the year working as a tour guide for an adventure travel company and making candles for the Queen (really!) Veteran actor, Barbara Keresztury, has lit up many Melodrama, Christmas Carol and Pine Hills Players stages since 1971. She is portraying, Olympia, the owner of the laundry. When she is not acting, she is running her Water Sampling Service. Sandy Bennett who has acted in, produced, and directed many plays here in Julian over the last 20 years, also works at our library. This year she is playing Miss Ida, another laundry owner. Joe Romano has played both the hero and the villain in past Melodramas but his favorite roles were when he was part of the Pine Hills players. Joining the Melodrama cast for the first time is Kevin O’Connor,

a 20 year Navy Veteran who saw duty in the Gulf War and Somalia. He is “Coyote,” an interesting character who tells a lot of bad jokes. Julian High School seniors, Randy Burke and Mickayla McDowell are staring as the hero and heroine. Randy has very little acting experience but is doing a great job. Mickayla has been in the Christmas Carol and several high school plays. Delightful 9-year old Alyssa and 12-year old Nicole Arias, both straight A students, were can-can dancers for the past two years but are playing the poor little orphan waifs this year. Well, that’s our cast. They work hard to put smiles on your faces while raising money for the Triangle Club’s Scholarship Program so do yourself a favor and gather your friends and family for a fun evening at the 58th annual Melodrama, every Friday and Saturday night at 7, every Saturday afternoon and the two middle Sunday afternoons at 2. Tickets are $10 for anyone over 12 and $5 under 12 but we have family discounts. You can purchase tickets at the Chamber Office in Town Hall or starting an hour before each performance. See our website at www. JulianMelodrama.com for more information and group sales by credit card.

Our Eagles took a road trip to Bradley Park in San Marcos on Friday for their third Citrus League game of the season. As soon as we got out of the vans, we discovered that it was hot. Not as hot as Borrego, but still hot. The Crusaders opened the game with an onsides kick off attempt that went out of bounds at the Eagle 35 and they were forced to rekick. Frosh returner Ozzy Martinez took the Crusaders booming re-kick at the Eagles 2 and was upended after a 15 yard pick up to the Eagles 17. The Eagles first play of the day was a short pass from Skyler Marushige to Shuuluk Linton for a 2 yard pickup. On second down, the Eagles protection blew up and somewhere in the pile the pigskin got loose, but was recovered by Shuuluk 1 yard closer to the Crusaders goal line. Third and seven at the Eagles 20. Kellen Regalado took the handoff and took off. He broke several tackles close to the line of scrimmage and motored down to Saint Joseph’s 43 before he was brought down. Skyler and JJ Corrales connected for a 14 yard pass to the Crusaders 29 and they followed up with another missile that went for 20 yards into the red zone at Saint Joseph’s 9. Skyler took the ball into his own hands and made a yard before he was gangtackled down. Skyler’s hurried pass was just a little high and just grazed the outstretched fingertips of a leaping Shuuluk. Third and goal from the Crusaders 8. Under center, the snap from Mason Baay to Skyler went awry and Saint Joseph’s recovered at their own 10. Crusaders QB de la Torre brought his team to the line in an ancient football formation known as a double wing T. It’s as old as dirt, but if practiced and well executed it can be successful. Unfortunately. 90 yards in 11 plays and the Crusaders score the afternoon’s first touchdown. Their two point conversion was good. 4:35 left in the first quarter, Julian 0, St. Joseph’s 8. The Crusaders tried another onsides kick, but Marshall Marriot did what every 6’1”, 150 pound freshman lineman should do. He fell on it and recovered the kick at the Eagles 44. Skyler dropped back on first down and swung a little pass to Kellen who stretched out the reception for 22 yards and a Julian first down. On the next play, the O line couldn’t contain the onrushing Crusaders and Skyler survived the onslaught with only a six yard loss. On second and 16, Skyler dropped a short pass to Kellen, again, and Kellen bulled his way for 17 yards and another Julian first down. Senior RB Darren Duffy went around the right side of the Eagles